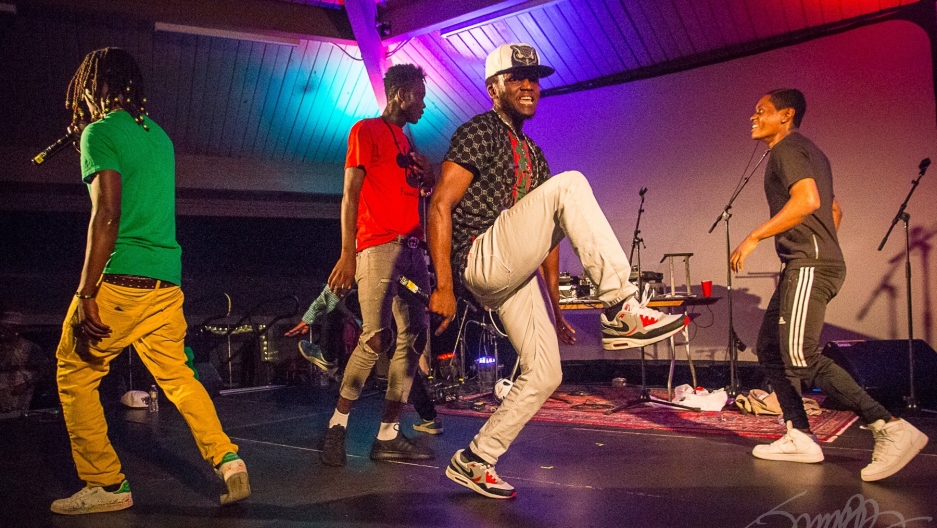 More than a decade ago, the founding members of A2VT, an Afropop band based in Burlington, Vermont, arrived in the United States as refugees. And when it came time to choose a group name, they wanted it to reflect their journey: from Africa to Vermont.

Lead singer Said Bulle goes by the moniker "Jilib." He grew up in Somalia and moved with his family to a Kenyan refugee camp at age 10. Five years later, a family in Burlington, Vermont, offered to sponsor him.

"Vermont chose me," Jilib says. "I just wanted a better place, a better life and wanted to get anywhere in America."

On the soccer field at Burlington High School, he met George Mnyonge, who'd take on the stage name "MG Man." Mnyonge is from Tanzania and arrived in 2007. He remembers looking down on his new home from the plane, and thinking that he "couldn't wait to put his feet on the ground." Vermont surprised him, though; there were no skyscrapers, traffic jams or throngs of people.

Within minutes of meeting each other they figured out they both liked music, and each sang a song in his own language for the other. Jilib already knew David Cooper, a music producer with a studio, and soon they were recording songs.

"Everything happened in the same year," Jilib says. "I had a big dream. I always wanted to be in the studio and record a song."

Their fifth single just came out.

The music is a blend of languages, cultures, and styles — including hip-hop.

And as they got more popular, word spread. Back in the refugee camp, someone found one of their music videos on YouTube and showed it to Jilib's dad.

Jilib says people back home prefer traditional songs and dance. So, when the video featured hip-hop, it was controversial.

"I got my dad calling me, telling me, 'Stop. You got to stop that music. You can't do that anymore,'" Jilib says. "And I’m just thinking to myself, 'Oh somebody came to see you or something?'"

Jilib managed to cool his dad down. He says his dad eventually understood that Jilib is doing what makes him happy. And being in the US, he says, makes that possible.