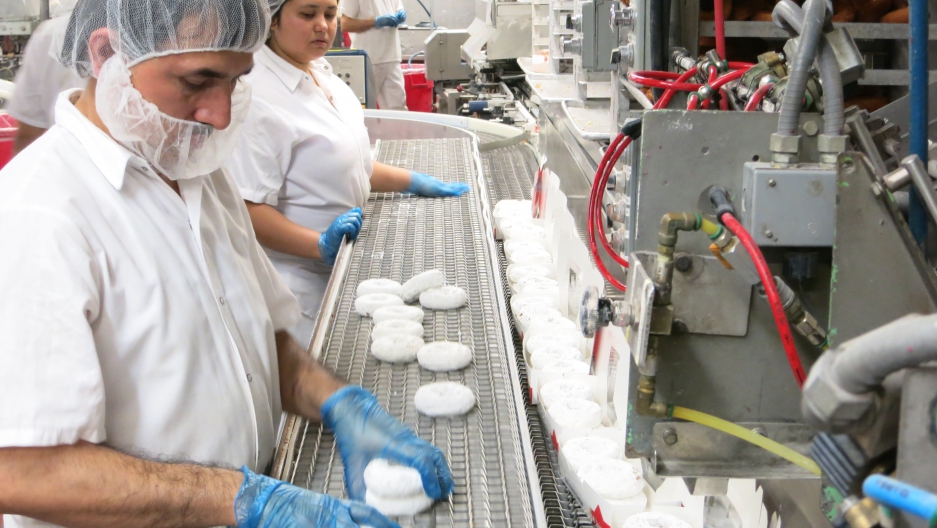 Refugee workers at the Koffee Kup Bakery in Burlington, Vermont package up doughnuts. The human resources manager there says refugees have been instrumental to the company's growth.

People in Vermont waking up with their morning coffee and doughnut have come to expect a certain consistency from their crullers, glazed, and maple donughts. The Koffee Kup Bakery has been operting in Burlington for 75 years. Today, the company produces 480,000 doughnuts a day at its bakery. Most of the people responsible for baking and packaging all those donughts are refugees, largely from Bhutan and Nepal.

Making doughnuts — seasonal pumpkin ones this time of year — is repetitive, tedious work. Once they’re cool, doughnuts stream down a conveyer belt where workers quickly pluck off six and box them up. Starting pay here is $14 an hour, plus benefits, which is at the high end for lower skilled workers.

She says her refugee employees have been instrumental in growing the company’s revenues 30 percent annually for the past three years. She says if she posts an ad looking for employees, people don’t answer.

“It is actually almost impossible to find non-refugee workers that are willing to work in the manufacturing environments.”

The Obama Administration recently announced its plan to increase the number of refugees accepted in the US from 70,000 to 100,000 annually, by the year 2017. This is foremost a humanitarian gesture, but, as the Koffee Kup knows, admitting more refugees can also be a boon for businesses and local economies, particularly in more rural area with labor shortages.

Vermont has an older, declining population and the state has the 4th lowest unemployment rate in the country at 3.6 percent. So, many local companies are tapping into the refugee labor pool. To do that, they turn to Eric Duffy, an employment counselor with the Vermont Refugee Resettlement Program.

“The demand is much higher than we can supply at this time. Almost on a daily basis we’re getting phone calls from new people trying to work with us,” says Duffy. 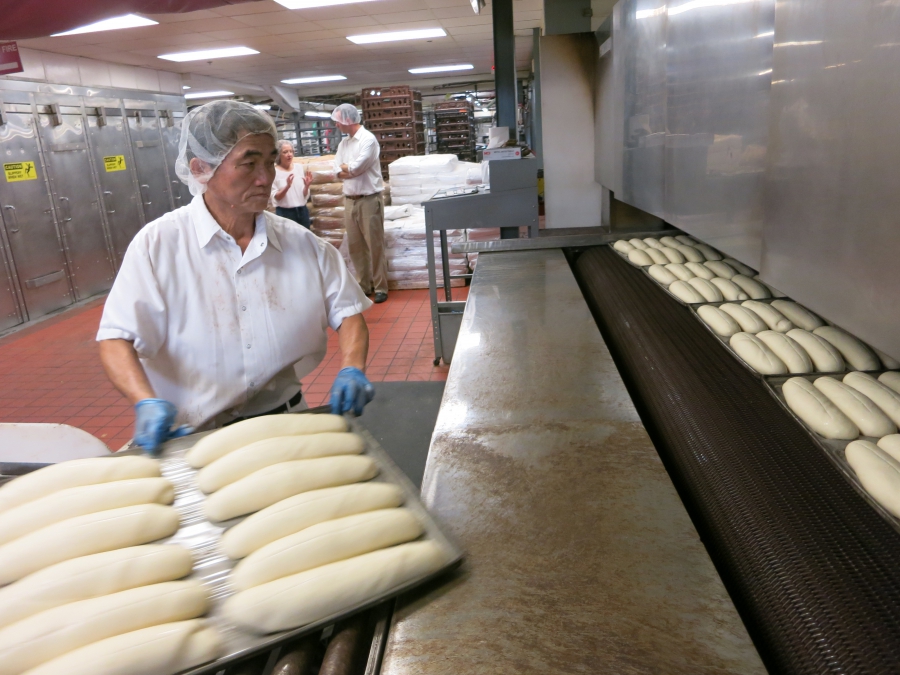 Some refugee arrivals in the US are placed in Vermont. Others choose the Burlington area to follow family. Within a few days of arriving, they meet with Duffy.

“We’ll sit down and talk to them about what they did in the past, the capability of working now in America, what they want to do, and we kind of form a very basic understanding of: Can this person work now? What job would they want? And so on and so forth.”

Besides jobs, refugees need help finding housing and healthcare. Families need schools. And there are plenty of cultural adjustments. One employer told me that some refugees don’t understand why Americans are so rigid about being on time.  Translation: Her employees are late. (She added, everything gets done.) And then there’s the language barrier.

I attended a level two evening English class in Burlington taught by Sherry Star. Besides vocabulary challenges, refugees are learning to understand how Americans speak.

“In the United States, our t’s become d’s. They (Americans) won’t say ‘better,’ they will say ‘bedder.’ So you have to listen for those t’s,” Star explains to the somewhat bewildered group.

Those classes are provided for free through the Vermont Refugee Resettlement Program. Well, free for the students. The organization’s parent, the nonprofit US Committee for Refugees and Immigrants, receives 91 percent of its budget from government grants, i.e., our taxes. Each refugee also gets a one-time payment of $925 from the federal government when they arrive.

Bill Kerr, who has researched the economic impact of immigration at the Harvard Business School, says you can think of the economic argument for or against admitting more refugees this way: “There’s a short horizon and a long horizon. In the short horizon, the public is going to have to play a financial role.”

Eric Duffy with the Vermont Refugee Resettlement Program, quantifies the short term to about four months. For the fiscal year 2014, 92 percent of the refugees the Vermont Refugee Resettlement Program took in were economically self-sufficient within 120 days, earning an average wage of $9.66 an hour. “Self-sufficient” means having more money coming in then going out — people can pay for their rent, food and utilities.

And they’re contributing to the economy.

Kerr says more effective companies, and countries, know how to tap into migrants. That being said, he hesitates to think of refugees as an economic competition story, but more a story of shared responsibility.

Joe Carton, the chief operating officer with Westport Hospitality, a hotel management company in Burlington, has seen the long-term economic and cultural impact of absorbing refugees in Vermont.  He hired his first refugees —Vietnamese workers — in the early 1990’s.

“The next generation of Vietnamese, they own businesses, they’re going to college, they’re pillars in the community. So it’s really an exciting story,” says Carton.

He says he’d welcome an influx of refugees from Syria or wherever. Vermont processed only 317 refugees last year. He'd welcome more.

“They (refugees) are dedicated, they are loyal, they come to work every day. If they don’t come to work, their mother comes to work.”

And he says bringing in more refugees doesn’t just make business sense. He thinks his state, which is 93.5 percent white, could benefit by becoming a little more culturally diverse.

RELATED: How to help Syrian refugees? Here are 6 ideas.