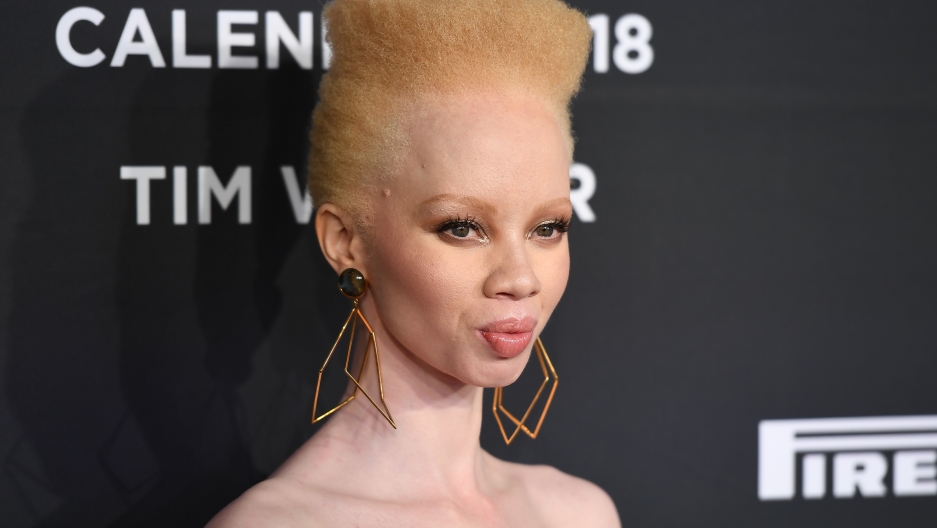 The cover of this month’s Vogue Portugal edition featured a model, like it usually does.

But this one is groundbreaking. The issue is about the diversity of African beauty, and it is the first Vogue cover to feature a woman with albinism. Her name is Thando Hopa and she’s a lawyer and activist from South Africa.

The world has reacted to seeing Hopa on the cover.

"That was so exciting," says Brandi Marie, a social worker and black woman with albinism from Chicago. "I got really emotional because growing up, I didn’t see myself. I looked through these magazines wanting to see myself represented — and I never did."

Hopa says that her parents actually taught her that she was "beautiful all the time." It was outside her parents' home that she felt unaccepted by society.

"When I grew up, I grew up having parents who were absolutely wonderful, who taught me that I was beautiful all the time, but then when I went into society and I looked at the media space, I wasn't represented with respect to what was portrayed as beautiful," Hopa told The World's Marco Werman. "I started developing inadequacy, as I had a relationship with society that took quite awhile for me to understand beauty in terms of me just being me and accepting that my eyebrows are pale, my eyelashes are pale, that my hair is curly and blonde as opposed to curly and black."

Thando Hopa: I had to cultivate a sense of enoughness that freed me from the validation of society and what it considered beauty to be. I had to go into the modeling industry understanding what the media space was saying was beautiful. My purpose was to focus on representation and saying that the way I look is enough whether I am on a Vogue cover or not. I needed to cultivate that sense within myself in order for me to free myself from the societal norms. To be quite honest, when I saw myself on a Vogue cover, I felt more relief than happiness. Relief in that I had gone through so many battles, and a lot of the times when you're going through all of these nuanced battles with respect to representation, when you actually get there, more than anything you just feel relief that you know what you've managed to do.

Marco Werman: I know you've probably told this story many times by now, but maybe one more time you could share it with us. How did you go from lawyer and activist to being a model?

I was a prosecutor and I used to prosecute in sexual offense cases. I decided to take a sabbatical, but I had already started my modeling career at the time. I went into it as a platform of representation.

So, modeling is activism for you? How did the modeling industry respond to a woman with albinism who is also an activist for albinism?

I think when I started off in the industry, I was still trying to cultivate my own self-worth with respect to the industry. I started experiencing a great deal of boxing and stereotyping. It was a constant narrative of prejudice in Africa. It wasn't that the narrative was not significant or important; it's that it became an all-consuming narrative and it started chipping away at my complete humanity in that I had experiences that people just did not consider important anymore. I was only the story.

Did you ever think that maybe modeling isn't the way to do this kind of activism?

To be quite honest with you, I think it was one of the best ways because media was a negotiating medium. It helped negotiate a new narrative with respect to many things and albinism was one of them. I started learning how to harness a more complete identity with respect to how people see albinism using media through the modeling space.

How did this Vogue cover come about?

I received an email from Portugal. They said that there was a cover opportunity photo shoot and I said "a cover?" I didn't believe it, to be honest. I went to my mother and I said to her that I received an email and it said that it wants to do this particular thing and they wanted to talk about my work as a diversity advocate. She said, "Oh my gosh, do you know this human trafficking stuff that's going on? What if these people want to take you to Cape Town and they're trying to traffic you?" Literally, that's how farfetched the thought was. We had to do a lot of due diligence to believe it.

Where was that shot?

It was shot in Cape Town. I actually brought some of my family jewelry that was very Southern African because representation is very multifaceted. Yes, there is the woman with albinism, but there's a Southern African Xhosa woman. There's just all of these facets of identity that have a story to it and I wanted to do my best to bring everybody with me in the best way I could.

Related: Ostracized in Tanzania, this community of albinos sing songs of acceptance

Speaking of identity, I've really been wanting to ask you this question since I learned about your story. South Africa is known for apartheid, a government policy that separated whites from blacks from society for years. What did that do to your own understanding of who you are?

That's a very intense question. The interesting thing I've learned is that race is an institution that was bred from a figment of somebody's imagination, but had very real consequences. Consequences that lived beyond color, because I am a black woman that still experiences the consequences of what race is and I don't have the color. But I learned something being in this body. It's that the issue isn't racism, isn't patriarchy and isn't issues with respect to albinism. The issue is that we have a behavioral defect with how we deal with difference.

When do you think it won't be a big deal anymore for a person with albinism to be on a cover of Vogue or any fashion magazine? When it's just a model on the cover and she just happens to have albinism?

It's a very difficult question to answer because I think right now we're getting to a point where people are celebrating for us quite a lot. You're the first woman to do this, you're the first black person to do that, the first person with albinism to do that, the first otherly-abled person to do this. The more you get frequency of representation, the more you'll be able to normalize something that is considered extraordinary. Probably frequency would help a lot because the frequency would not make it a deviance, it would make it a normalization. We need to start setting values that allow for that kind of progress, diversity and inclusion.