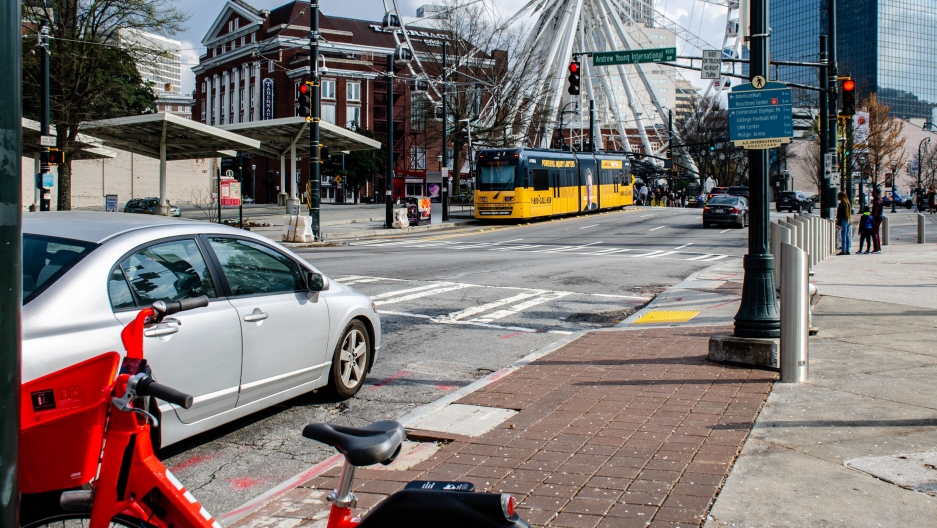 Atlanta’s new green energy plan, approved by the City Council in March, calls for the city to run on 100% renewables by 2035. It’s an ambitious goal: The city currently gets 6% to 8% of its electricity mix from renewable sources.

Like any other city, Atlanta is woven with power lines, trams and buses. The electricity that makes Atlanta run comes mostly from coal, natural gas and nuclear energy. Only 6% to 8% comes from renewable sources.

“Obviously, going from that number to 100% by 2035 is a bold goal,” said Amol Naik, Atlanta’s chief resilience officer.

He says the green energy plan, approved by the Atlanta City Council in March — which aims to get to 100% green in 16 years — is “ambitious and achievable.” But, he admits, there’s no easy path to get there.

“There's no five-run home run or four-point shot in basketball. This is something that needs to happen in an incremental way over a number of years,” said Naik. “It’s a lot of folks sitting around a table figuring out the best way forward.”

More than 100 cities have recently pledged to run on 100% renewable energy, signing onto the Sierra Club’s “Ready For 100” campaign. But turning commitment into action is where the even harder work begins, and Atlanta might be the ultimate test case: Former US Vice President Al Gore has said that if Atlanta can get to 100% green energy, anybody can. 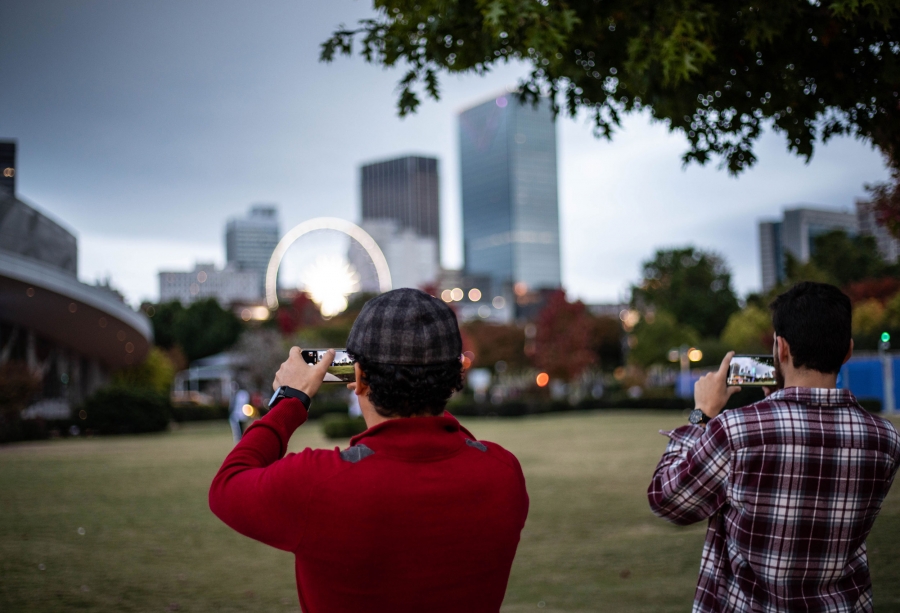 So, how exactly will the folks in Atlanta increase the city’s green energy supply from 8% to 100% by 2035?  They’re going to start by trying to use less energy.

Cox says you start with the basics: insulating old homes and installing energy-efficient lights and better cooling and heating systems.

“We identified an opportunity to reduce the consumption in the city 25% to 30%, just through the energy-efficiency side alone.”

“We identified an opportunity to reduce the consumption in the city 25% to 30%, just through the energy-efficiency side alone.”

And Cox says studies found there's another benefit to investing in efficiency: “They were showing an internal rate of return of over 60%. That’s six-zero percent. That kind of a return on an investment is a tremendous opportunity that you don’t see hardly anywhere. You look at the stock market, you’re going to be happy to get 7% or 10% out of that.”

But efficiency is just a start. Atlanta’s plan also relies on putting up a lot more solar panels — on homes, commercial buildings and at utility scale solar farms. It banks on things like improved battery storage for solar energy as well as renewable-energy credits from outside the state to offset coal and gas power still coming from the local grid. Atlanta’s mix will also still include a lot of nuclear power, which environmentalists are split over. 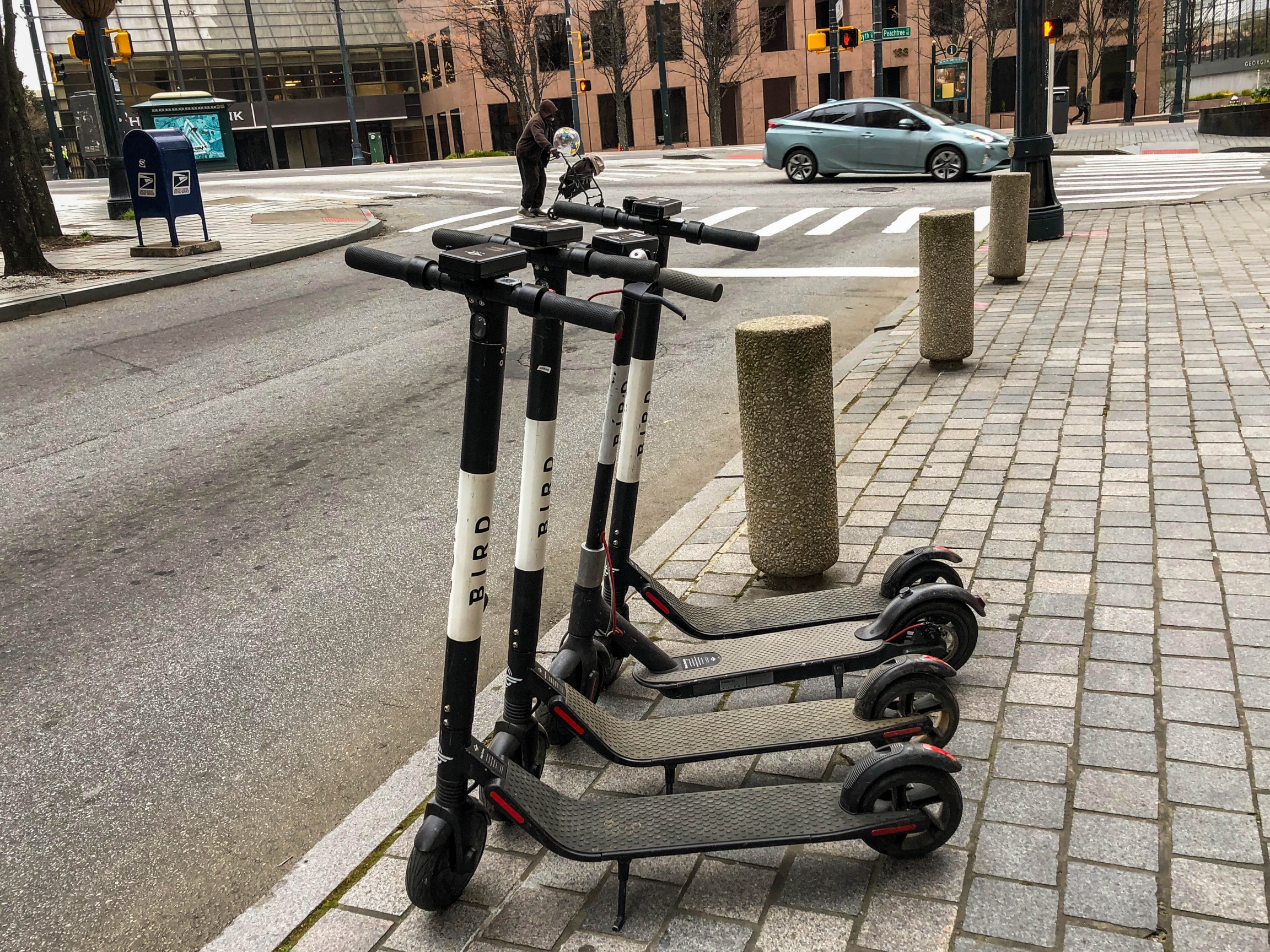 Atlanta is filled with electric scooters and dockless bicycles for rent. The transportation sector is not, however, included in the city’s ambitious new green energy plan.

But whatever the city does to try to reach its goal, Atlanta will need the cooperation of some key players who aren’t so gung-ho on the new plan.

“I guess you would say it's a nice dream. In country talk, it’s pretty good fodder, but fodder doesn't feed much.”

“I guess you would say it's a nice dream. In country talk, it’s pretty good fodder, but fodder doesn't feed much,” said Lauren “Bubba” McDonald Jr., the chair of the Georgia Public Service Commission, which oversees the utility that supplies most of the state’s power.

Related: This high school sophomore from Minnesota 'jumped on the bandwagon' to save the planet

Don’t get him wrong, McDonald supports a push toward more solar energy. He says with the drop in solar installation prices, combined with Georgia’s sunny climate and ample space to build solar farms, solar energy in the state makes sense.

But he also says there are limits. If Atlanta were to paper itself with solar panels, that might meet only 25% of the city’s energy needs.

McDonald is a free-market guy, so he doesn’t like mandates or subsidies to increase the mix of green energy. And he’s not especially concerned about the growing threat of man-made climate change, either.

“I'm not going to sit here and just say it's a bunch of 'booey,' because there may be some cause,” said McDonald. “But this Earth has been here a long time. And I'm a strong believer; I'm a Christian, and I know who's in charge.” 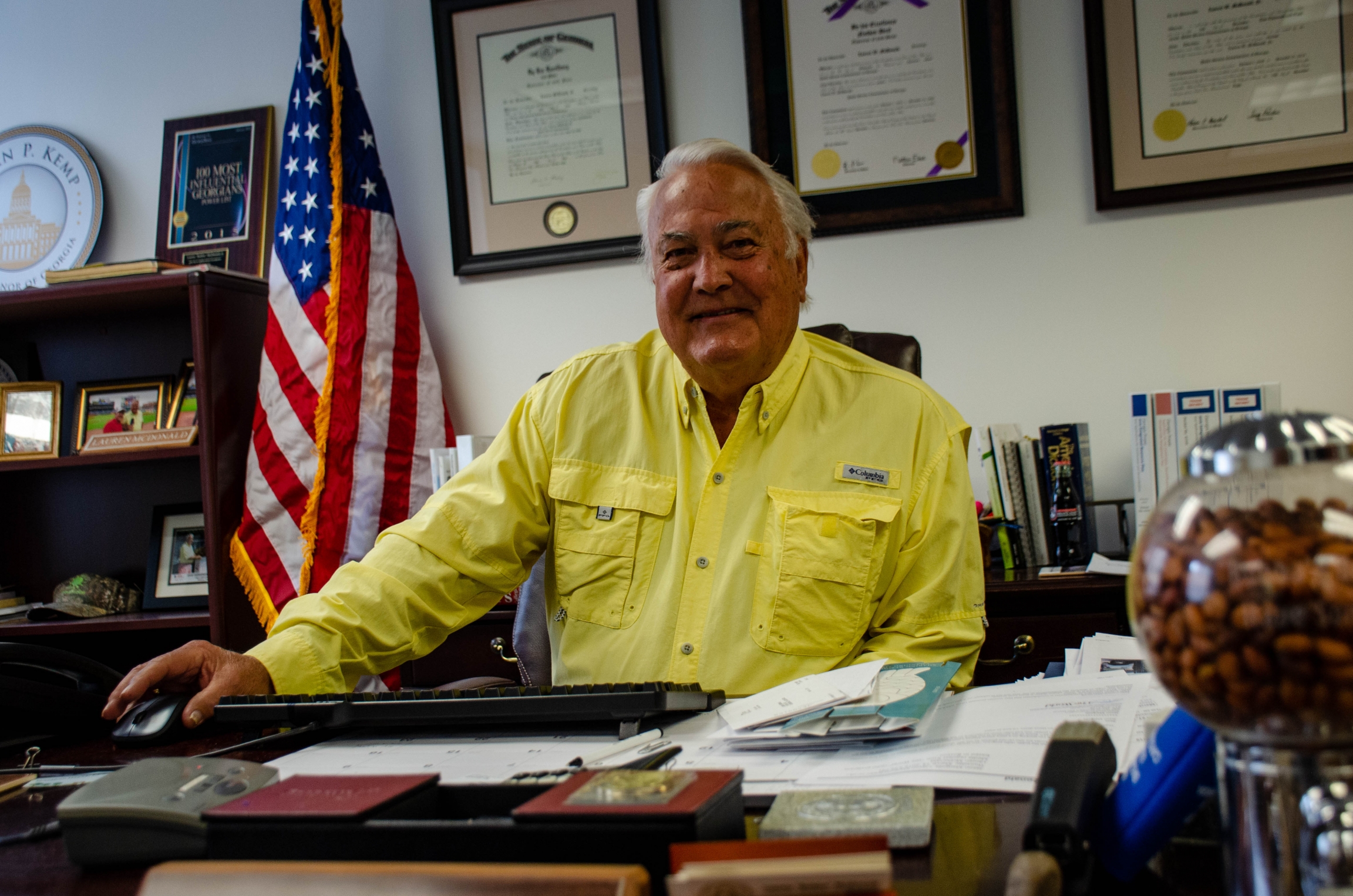 Lauren “Bubba” McDonald Jr., chair of the Georgia Public Service Commission, supports solar energy in Georgia, but says there are limits to how much the state can cost-effectively support.

To get its green plan off the ground, Atlanta will need to sell it to regulators like McDonald, as well as lawmakers in the state’s conservative Legislature.

“You don't lead with climate change,” said Stephanie Stuckey, a former state representative and now the director of sustainability with the Southface Institute in Atlanta.

“You lead with: Let's provide economic development for the entire state,” said Stuckey. “All of the areas where we are building large-scale, industrial solar arrays in Georgia are in rural areas and the economic development and the local government leaders who are embracing these projects are by and large conservative, and they’re not talking about climate change.” 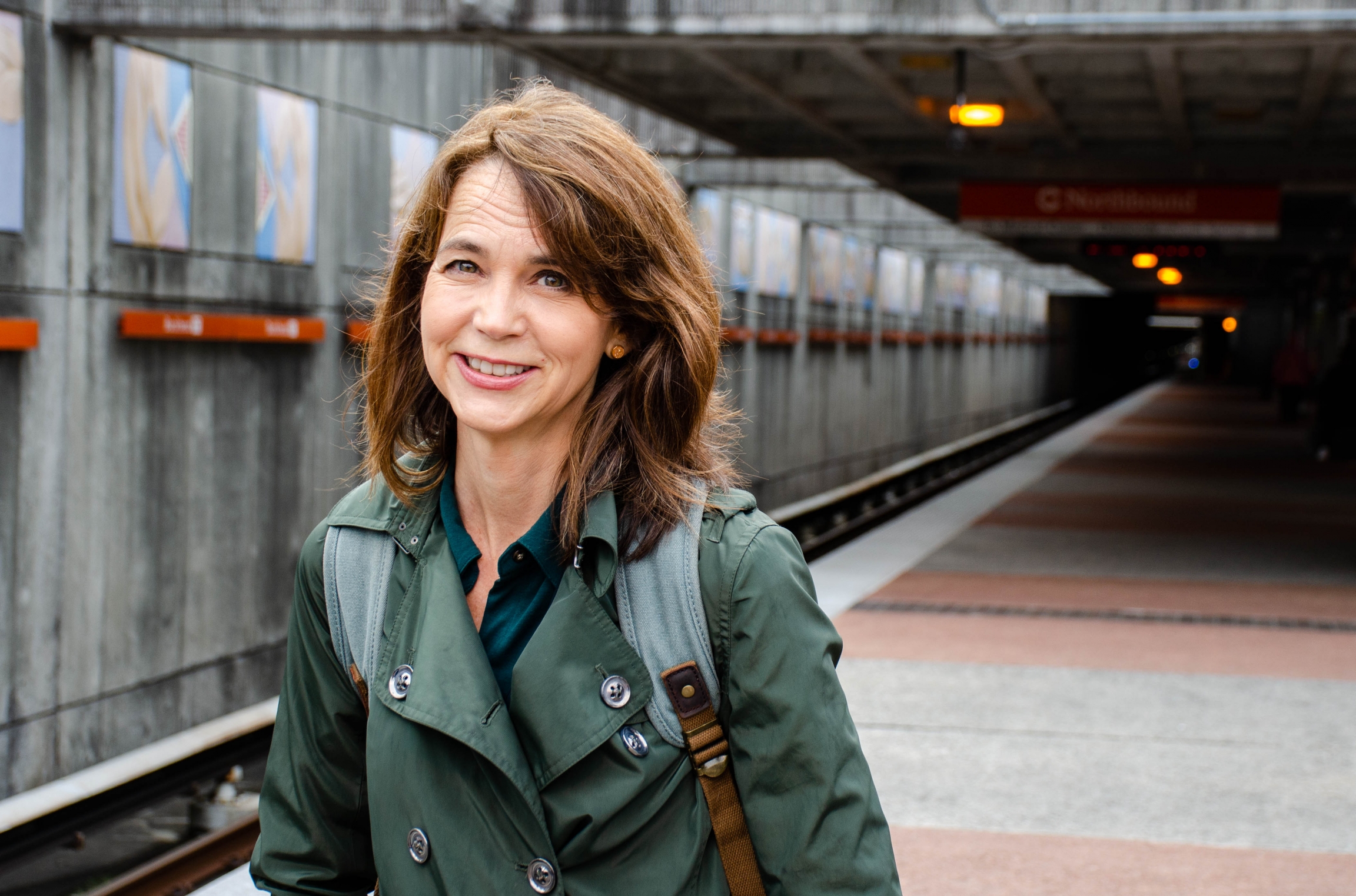 Atlanta’s green energy plan touts the creation of 8,000 new jobs in the industry if policymakers fully implement the plan. Backers say the plan could also help low-income families in other ways.

“We know that solar can lower a person's home energy bill,” said Chandra Farley, the director of just energy with the nonprofit group Partnership for Southern Equity.

Farley says many black households in Atlanta are struggling just to keep the lights on, paying as much as 10% of their income on their electricity bills, and wants policymakers to help Atlanta’s low-income communities by investing in the green plan. To Farley, it’s really a matter of priorities.

“Atlanta is still pretty segregated by race and class. The west side of Atlanta, it's right on the other side of the billion-dollar stadium,” said Farley.

Atlanta’s gleaming new football stadium actually cost $1.6 billion, and Georgia taxpayers could end up paying $700 million for it. Supporters of the city’s green energy plan say that makes their idea sound like a bargain.

It’s early days — Atlanta’s green energy blueprint was just approved by the City Council in March with no set funding source. But City Hall is making the case that it’s not only the right thing to fight climate change in the future, but also to help people in the region right now. 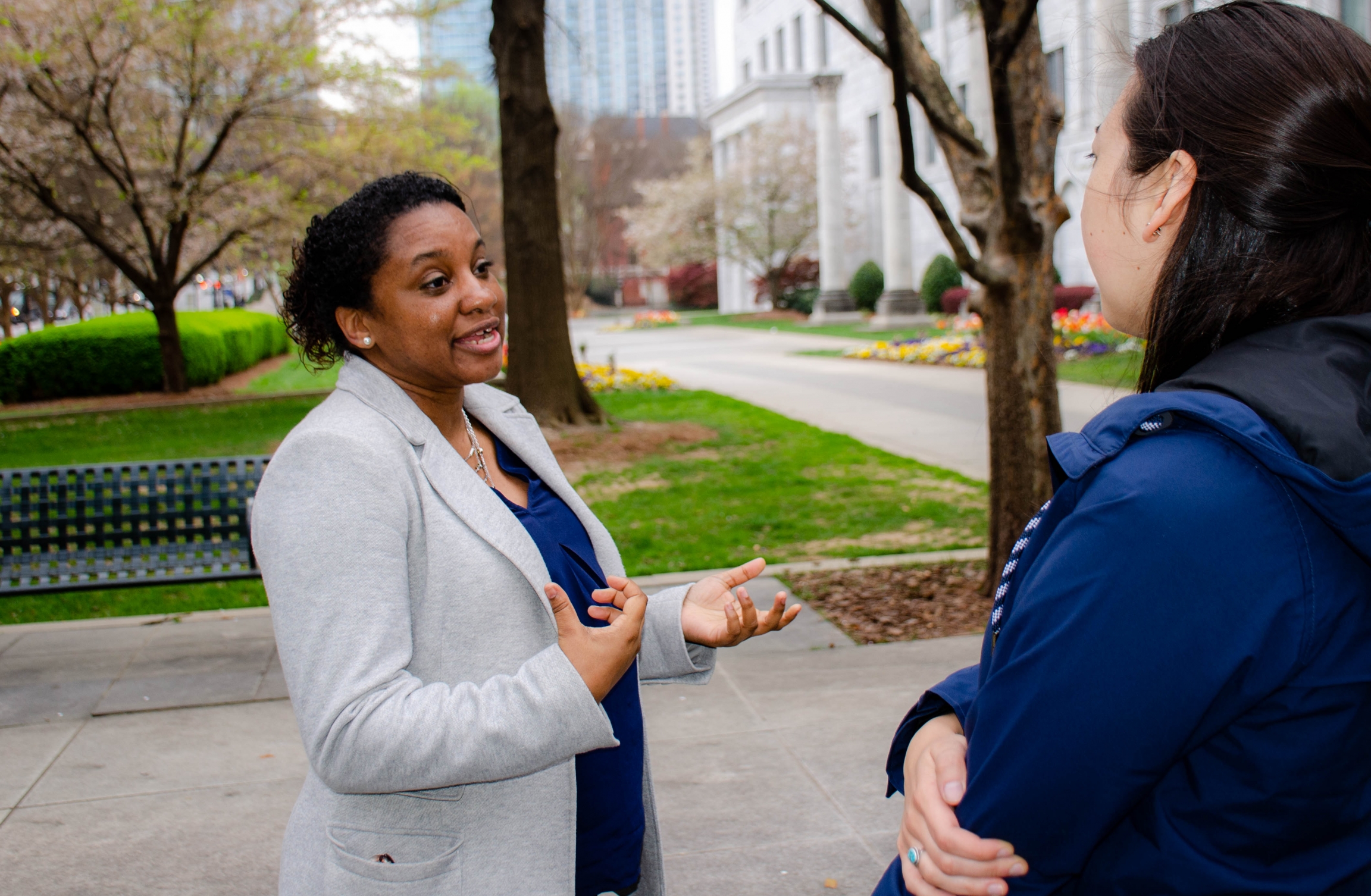 Chandra Farley, with the Partnership for Southern Equity, says solar panels would provide lower costs and price stability to lower-income households in Atlanta that are struggling to pay their power bills.