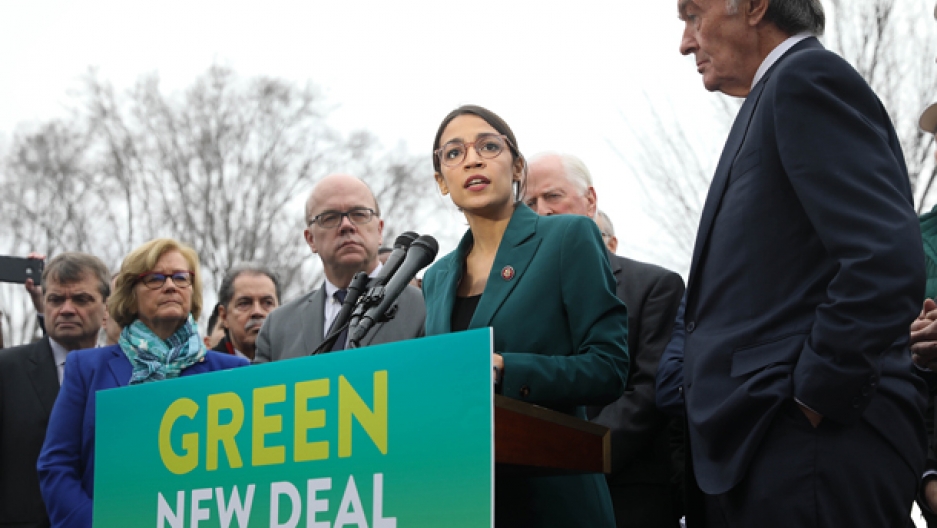 The Green New Deal put forth by Rep. Alexandria Ocasio-Cortez (D-NY) and Sen. Ed Markey (D-MA) does not mention putting a price on carbon.

The Green New Deal resolution recently introduced by Congresswoman Alexandria Ocasio-Cortez of New York and Sen. Ed Markey of Massachusetts has attracted a lot of attention for its bold proposals to transform the US economy as well as a lot of criticism for going too far and being politically untenable. One perhaps unlikely source of criticism has come from the editorial voices at The Washington Post.

The Post's Editorial Board recently laid out its own argument for a Green New Deal that, unlike the AOC-Markey plan, includes carbon pricing and stops short of broader progressive goals.

Stephen Stromberg of the Post, who authored the editorial, expressed some surprise that the Green New Deal did not include carbon pricing, noting that in 2009, Sen. Markey co-sponsored a carbon-pricing bill that, at the time, was considered “the premier global warming/climate change legislation of the Obama era.” The bill did not pass.

“There has been some hand-wringing among environmentalists about the political attractiveness of a carbon pricing-type program.”

As a result, “there has been some hand-wringing among environmentalists about the political attractiveness of a carbon pricing-type program,” Stromberg said. “On top of that, for a long time, [some] have been wary of carbon pricing, either through a carbon tax or a cap-and-trade program like California has, for a variety of reasons."

One reason is ideological: Some people are skeptical of market-based mechanisms and believe government mandates will be more effective. Others believe carbon pricing won't spur enough research and development into alternative energy plans. Still others simply don't like the idea that companies would essentially be allowed to pay to pollute.

“We accept that that's one way to look at it,” Stromberg said. “But another way to look at it is [that] it’s ramping down carbon emissions over time, it's doing so in a cost-effective way and it's marshaling every dollar to its highest benefit. So, if you can get over the discomfort of the appearance that companies are paying to pollute, what in fact you get is a highly effective, highly efficient system to get very far — and, in fact, we think where we need to be — to fight climate change.”

In the eyes of many critics, carbon pricing has another big downside: If coal plants and other industries are allowed to produce emissions simply by paying a fee, they will continue to create pollution hazardous to public health, particularly in low-income neighborhoods. Stromberg acknowledges that this is “a substantial problem.”

To limit it, the Post recommends “a higher price on carbon than we've seen anywhere else before, one that would be much more effective at fighting the coal industry and making it less and less economical — not to mention other industries that produce carbon emissions in various ways.”

In addition, the government will need to make wise choices about what to do with the revenue generated by carbon pricing. “A slice of that revenue undoubtedly has to be spent on helping particularly low-income people cope with the transition,” Stromberg said.

Possible schemes to achieve this include rebates paid directly to citizens and increasing the earned-income tax credit for the working poor. Rebates ensure that people who will be paying more in energy prices and gas prices will not be harmed by the energy transition. “In fact, there has been study after study showing that people can be made whole, if not better than whole, if you have this type of rebates system,” Stromberg said.

“That's what we're really worried about: This idea that the government will spend a large amount of money, will muster man-hours and resources toward projects that seem like they might help in this really important fight, but end up not helping. High-speed rail is just one example.”

“That's what we're really worried about: This idea that the government will spend a large amount of money, will muster man-hours and resources toward projects that seem like they might help in this really important fight, but end up not helping. High-speed rail is just one example,” he said.

That being said, the Post does advocate for direct government spending and intervention beyond a carbon pricing plan, Stromberg adds. In their view, the government should provide reliable, public transportation as an alternative to cars, particularly for low-income people who can't afford to use Uber or pay higher gasoline taxes. The government should also provide more research and development funding to develop zero-carbon technologies and to regulate efficiency standards for cars and appliances.