Steam rises from the cooling towers of the Electricite de France (EDF) nuclear power station at Nogent-Sur-Seine, France. The nuclear industry, and some of the world's top climate scientists, are arguing at the Paris climate talks that nuclear energy must be part of a low-carbon energy future.

James Hansen, perhaps the world’s most preeminent climate scientist, is best known for sounding the alarm to Congress about the risks of global warming way back in 1988. Since then, he’s been an outspoken critic on the lack of progress.

He’s doing that again this week at the Paris climate talks. He spoke about his 8-year-old grandson, Conner. A few years ago, the boy overheard his famous grandpa talking about climate change and started crying.

“So my wife quickly went to him and said, ‘Oh, don’t worry, Conner. Grown-ups are working on this problem. They’re going to solve the problem.’ Ummm, yea, we should be solving the problem.”

Hansen, who was the head of the NASA Goddard Institute for Space Studies from 1981 to 2013, said his grandson is a bit older now and has reached some conclusions, like we can’t build a time machine to fix the climate crisis.

“And the other thing that he concluded was, you know, grown-ups are scared of nuclear power. But, he says they should be scared of climate change.”

For nuclear to make a dent on climate emissions though, we’d better get busy building. To reduce greenhouse gases by 10 or 15 percent by mid-century, assuming business as usual growth, we might need to triple the amount of nuclear reactors worldwide. But building that much nuclear presents a big challenge.

“It’s expensive,” said Kelly Sims Gallagher, director of the Center for International Environment & Resource Policy at The Fletcher School of Law and Diplomacy at Tufts University. “If you’re an independent power producer and you’re trying to decide what kind of power plant should I build, nuclear simply isn’t competitive.”

Nuclear plants costs between $10 billion and $12 billion to build. And atomic energy has other obvious knocks against it, as Mary Lampert knows. She lives in the shadow of the Pilgrim nuclear power plant in Plymouth, Massachusetts, which opened in 1972. (It was recently announced that it would be shut down by 2019.)

“My house is about six miles from the reactor across open water,” said Lampert, who heads the community watchdog group “Pilgrim Watch.”

She also worries about the possible health impacts from the plant and what to do with spent nuclear fuel. 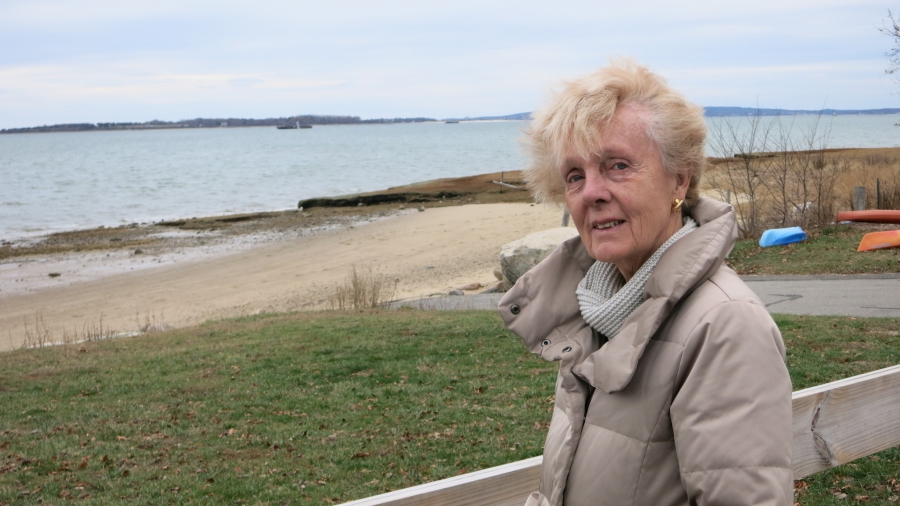 Mary Lampert lives across the bay from the Pilgrim nuclear power plant in Plymouth, Mass. She says the risks that come with nuclear energy are too great to build more.

Lampert makes a convincing argument and expresses concerns held by many across the globe, and many nations. After the meltdown at the Fukushima nuclear power plant in Japan, Germany said it was done with nuclear.

Gunnar Luderer at the Postdam Institute for Climate Impact Research argues that Germany, and much of the developed world, can reduce carbon emissions from electricity sources by 90 to 95 percent by mid-century, without resorting to nuclear.

Luderer says we can get there by investing heavily in renewables and implementing smarter policies and building smarter grids. I asked him how many wind turbines we are talking about building here?

Luderer did some quick math and came up with an answer for how many we would need worldwide: “100,000 wind turbines per year, if I’m not mistaken.”

Now, not all wind turbines produce the same amount of electricity, but 100,000 turbines a year would mean adding about 3.5 million more by mid-century. To get a sense of perspective, the Global Wind Energy Council says there were 268,000 wind turbines spinning their blades across the globe at the end of 2014. In the United States, 48,000 utility scale wind turbines were online at the end of last year, providing enough electricity for roughly 18 million homes, according to the American Wind Energy Association.

There are other big challenges to going all renewable  — solar and wind are intermittent energy sources and take a lot of space to build, to name two major drawbacks — which is why some climate scientists are saying that renewables alone just can’t get us where we need to be.

Martin Malin, executive director of the Project on Managing the Atom at the Belfer Center for Science and International Affairs at Harvard’s Kennedy School of Government, understands why people are frightened by nuclear power. And he understands that tripling the amount triples the risks. So I asked him: Is nuclear worth it?

“What’s worth it is to try and strengthen safety, strengthen security, address the proliferation problems, strengthen the institutions that regulate nuclear power. If we can do all that, it could make it possible for a more dramatic growth and that is worthwhile. Over the long term, we’re going to have to use this technology.”

To get there, Malin says there needs to be a better dialog between the public, industry and governments. He adds that people also need to understand the risks of continued reliance on dirtier energy sources, like coal, risks beyond simply generating more greenhouse gasses.

“Something like 3 million people a year die prematurely from inhalation of fine particulates. Nothing like that number of people have died from nuclear accidents and radiation. So if you sort of compare those numbers, you think, well of course, why wouldn’t you want more nuclear?”

“We have to face the fact that this danger of fossil fuels is staring us in the face,” said Hansen. “It’s absolutely 100 percent certain that we’ve got a very dangerous situation. And for us to say — 'oh, we’re not going to use all the tools that we have to try to solve it' — is crazy.”

Put another way, the world’s policymakers need to decide: which path forward is least crazy.