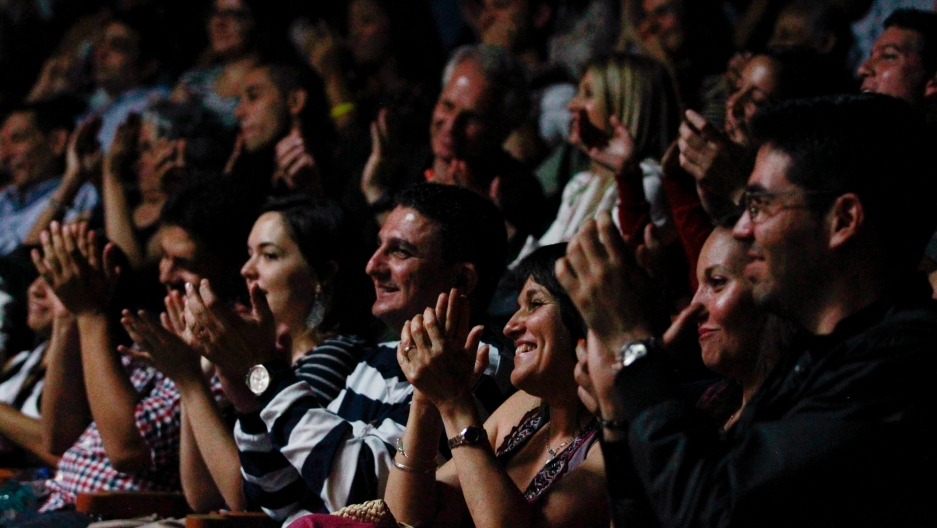 The audience claps during Venezuelan comedian Laureano Márquez's stand-up performance in Caracas, June 29, 2014. The world's highest inflation and shortages of basics from milk to toilet roll are really no laughing matter for Venezuelans, but they find solace in a thriving comedy scene lampooning the governance behind the economic strife. Through cartoons, stand-up comedy and online satire, humor has become a prominent and poignant form of criticism as mainstream media exercise more self-censorship.

Thirty-nine journalists have been detained in Venezuela this year, far more than in any other Latin American country, according to the Caracas-based Institute for Press and Society.

Their arrests are part of the government’s crackdown on journalists who report on the country’s escalating instability as President Nicolás Maduro fights to retain power against the opposition’s internationally backed effort to oust him.

Local reporters have seen early morning raids of their homes, arrests, and rushed and legally questionable trials for charges of “inciting violence. They’ve been given verdicts ranging from self-censorship to jail time. Several foreign reporters — including Univision TV anchor and US citizen Jorge Ramos — have been deported from Venezuela.

In this repressive environment, journalists are finding ways to avoid censorship and still cover the country’s crisis.

Laugh so you don’t cry

Government pressure on the Venezuelan media dates back to the late President Hugo Chávez, who took office in 1999. Over three administrations, Chávez used his power and immense popularity to chip away at the separation of powers and undermine press freedom.

Maduro has continued this tradition since succeeding Chávez, his political mentor, in 2013. He has also overseen Venezuela’s slide into humanitarian crisis, economic collapse and political chaos. To quash protests, his government has turned increasingly authoritarian, violently repressing dissent and silencing journalists.

Under such circumstances, Venezuela’s turn toward satirical news recalls an old saying that’s grown popular in these difficult days: "Me río para no llorar” — laugh so you don’t cry.

Its animated series, “La isla presidencial,” “The Presidential Island,” which began in 2010, has Venezuela’s leftist strongman leader – first Hugo Chávez, now Nicolás Maduro – stranded on a desert island with other presidents of Mexico, Argentina, Bolivia, Brazil, Nicaragua, Colombia and with the king of Spain.

“The Presidential Island” portrays Maduro as illiterate and overweight, a blundering simpleton who is overly proud of his mustache and incessantly invokes the late Hugo Chávez.

In one episode from the current season, Maduro takes it upon himself to ration water during a drought. His poor handling of water distribution leads the other presidents to revolt. They find water sources of their own.

Maduro declares it a “coup d'etat” and insists that it’s all an “imperialist” plot – just as he has done during Venezuela’s repeated recent national blackouts.

Political cartoonists are another front of the Venezuelan media’s resistance to oppression by the Maduro regime.

Cartoonist and graphic artist Rayma Suprani was dismissed from the national newspaper El Universal in 2014 after a drawing that mocked Maduro’s authority. She portrayed Chávez’s signature as a flatline on a hospital heart-rate monitor, as if to say, “Venezuela’s Socialist revolution is dead.”

Venezuela has a long history of satire during times of political and economic crisis.

First published in 1892, “El cojo ilustrado” — “The Illustrated Cripple” — was a Venezuelan magazine that used satirical drawings and articles to address political topics without explicitly referring to the government in power.

During its 23 years in circulation, the publication skewered everything from current events to Venezuelan identity politics — always obliquely, using sly humor.

Laureano Márquez, a Venezuelan humorist, political scientist and author with 3.43 million Twitter followers, irritates the government from the safety of Spain, where he now lives.

“Russia votes at UN against intervention in Venezuela,” he tweeted on March 1. “Except if it’s Russian, Chinese or Cuban.”

Communist Russia, China and Cuba are the Maduro regime’s three most powerful international allies. More than 50 countries — including the United States, Colombia and Canada — back National Assembly leader Juan Guaidó’s bid to unseat the president.

Even Guaidó, who appears to have massive popular support for his challenge to Maduro, has also been the target of online ribbing in Venezuela.

On Jan. 22, security footage from the Hotel Lido in Caracas surfaced that appeared to show Guaidó meeting with officials from the Maduro regime. That would have been an unpopular move among opposition supporters.

But the grainy video simply showed an unidentified person wearing a baseball cap and gray hoodie, walking with his hands in his pockets, followed by Guaidó’s aide Roberto Marrero. It could be anyone, Guaidó’s supporters reasoned.

The hashtag #GuaidoChallenge quickly went viral on Instagram as users posted photographs and videos of themselves, cartoon characters and random people posing in hats and hoodies. One Instagram user dressed up his dog in a hat and sweatshirt and quipped, “It’s a GuaiDog!”

Guaidó eventually admitted that he had in fact met with the Maduro regime, hoping to persuade them to hold a new presidential election.

That had been unacceptable to Maduro. The next day, Guaidó declared himself interim president of Venezuela, triggering the power struggle that has plunged the country into chaos.

There’s nothing funny about Venezuela’s tragedy. But humor is among the few ways Venezuelans have left to cope with their desperation and frustration.

They’re laughing, as the saying goes, so they don’t cry.

Juan-Carlos Molleda is an Edwin L. Artzt dean and professor at the School of Journalism and Communication at the University of Oregon.