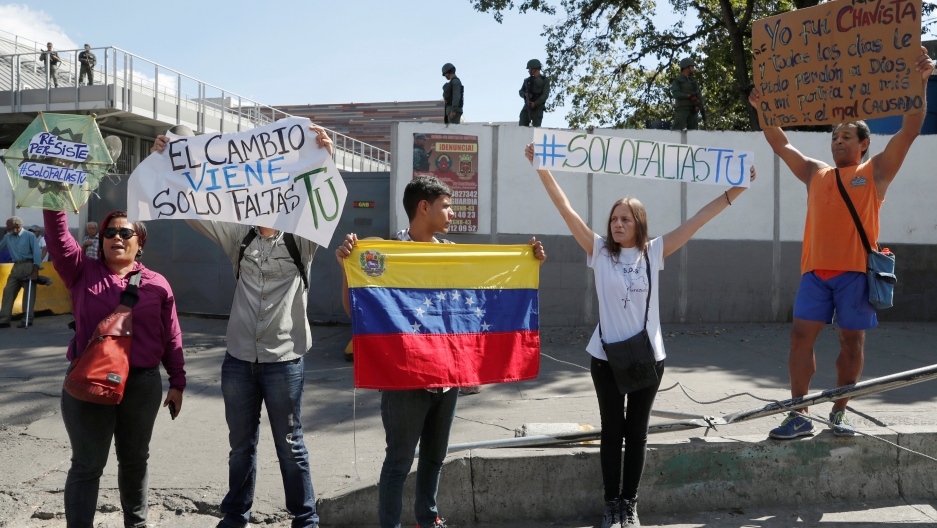 Venezuelan President Nicolás Maduro is increasingly embattled now that the US and several other countries have thrown their support behind opposition leader Juan Guaidó. Guaidó, 35, declared himself interim president last week and was recognized by US President Donald Trump.

In response, Maduro ordered US diplomats out of Venezuela and announced he was breaking all “diplomatic and political relations.”

Over the weekend, the White House said the US would respond if there is any violence or intimidation against US diplomats in Venezuela, or against Guaidó. It called Maduro the "former president" of an "illegitimate mafia state."

Maduro, who still has the crucial support of the Venezuelan military, said in a tweet on Monday, “Our armed forces are prepared and ready to defend the national sovereignty and territorial integrity before attempts to harm our sacred fatherland."

Opposition leader Guaidó, for his part, also had a message for the military: “Soldiers, I give you an order: Don’t shoot at the Venezuelan people. Do not repress peaceful demonstrations and don’t massacre our youths,” he said in a speech Friday in Caracas. “In Miraflores [the Venezuelan presidential palace] they believe torturing our people will stop the protests. We will not tire nor be intimidated.”

Venezuelan historian Miguel Tinker Salas is a professor at Pomona College who has written four books on Venezuela. He says foreign powers are meddling in his home country, deepening the crisis.

"We have plenty of examples where US interventions — whether Iraq Afghanistan, Syria, Libya or anywhere in Central America — have proven to be disastrous for the country and for the region," said Salas, whose latest book is "Venezuela: What Everyone Needs to Know."

Salas spoke to The World's Marco Werman on Monday about how he believes the US should take Mexico's offer to try to negotiate an end to the crisis, instead of openly intervening on Guaidó's behalf.

Marco Werman: How unusual do you think it is for the US and all of these countries to throw their endorsement of someone, Juan Guaidó who just went ahead and declared himself president?

Miguel Tinker Salas: I think it's unprecedented. I think it's it's another form of a constitutional coup, whereby citing a certain article in the constitution and claiming that Maduro is unfit to perform the duties of president, now becomes the criteria by which, in this case, opposition or foreign countries can move to replace a president. It sets a very dangerous precedent. I think that the issues in Venezuela are grave, are serious. Maduro has a significant amount of blame. But then again, this is a crisis for Venezuelans to resolve, not a crisis for others to resolve.

Doesn't the Venezuelan Constitution lay out precisely what should happen in this sort of scenario, and isn't it being followed?

There's also a practical consideration here, too, because this isn't just the US, it's also the EU, it's Canada. There's the Lima Group, the regional bloc of the Americas. Most members of the Lima group have supported Juan Guaidó after he declared himself interim president. At the end of the day, Venezuela's neighbors need to do business with somebody in Caracas who is going to pick up the phone. Who are they supposed to call?

Well, the group that became the Lima Group tried to sanction Venezuela within the OAS. They weren't able to. Other countries did not go along with it. So, they formed the Lima Group to pressure Venezuela. That's a rather unprecedented move. I think the position taken by Uruguay and by Mexico is a much more sane proposition. They've offered to negotiate, again, because if we're betting on some sort of undemocratic or extrajudicial mechanism to unseat Maduro, the legacy will remain, and the legacy for Venezuela will be very dangerous. I think that the only solution is to negotiate the process. Because in the long term, if there isn't a consensus on how that transition happens, we'll be back to square one again with conflict — whether it's from the Chavistas or it's from the opposition. So there has to be some sort of middle ground formed in which that consensus is created, so that if a transition takes place the other side will respect the outcome. Otherwise, it's unlikely the other side will respect the outcome. And we're back at square one.

I know it's hard to generalize, but are the vast majority of Venezuelans happy with Guaidó?

What should the US do tomorrow vis-a-vis Venezuela? I mean, they've recognized Juan Guaidó. Now what?

I think the US should take up Mexico and Uruguay on its offer of negotiations. I think that negotiations that respect both sides, that respect human rights, negotiations that are not meant to favor one side or the other, provide the only opportunity for Venezuela. I know it sounds like a cry in the wilderness, but if we do not find that middle ground, I fear that the outcome will be violence. And I fear that long-term, we see a cycle of spiraling out of control.