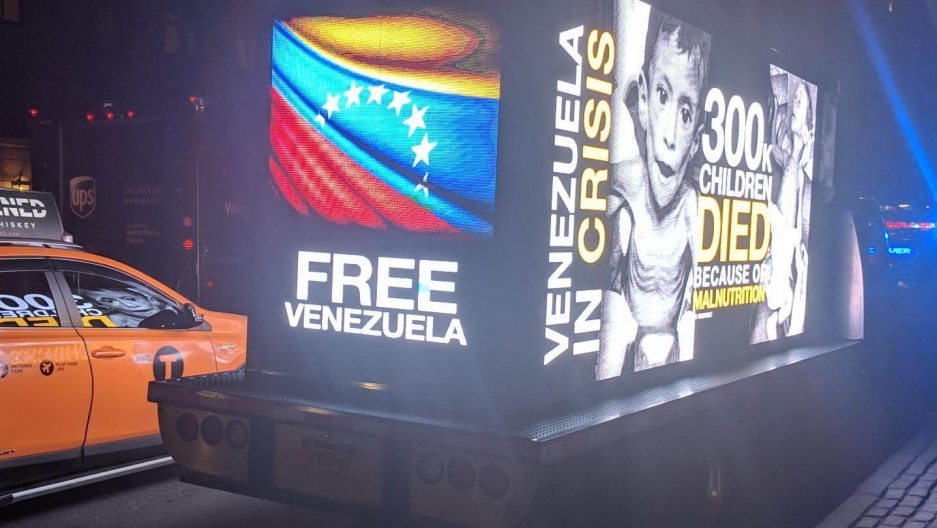 A moving billboard in support of Venezuelan opposition leader Juan Guaidó circulates in New York City on Jan. 23, the same day protests erupted when Guaidó, president of the National Assembly swore to take presidential powers and call for fresh elections. The billboard also showed images of Venezuelans suffering from hunger, together with data about the ongoing crisis.

US sanctions directed at Venezuela target President Nicolás Maduro and his circle of elite government officials in an attempt to control their access to financial assistance from US citizens and companies. In 2015, The Obama administration issued sanctions against Maduro’s administration on the grounds of human rights violations, and they continue under current US President Donald Trump to this day.

Venezuela’s power crisis exploded on Jan. 23 when opposition leader Juan Guaidó invoked a constitutional right to take presidential powers and call for new elections. Maduro’s 2018 election victory was deemed illegitimate by numerous nations in Latin America, Europe as well as Canada, who recognize Guaidó’s legitimacy instead. The international community rushed to take sides, some calling Guaidó’s move a coup while others referred to it as a “self-declaration.”

The current power crisis in Venezuela has raised new, complicated questions on the role and impact of US sanctions.

Sanctions against PDVSA are likely to yield stronger and more direct economic consequences, given Venezuela’s dependency on oil exports and the importance of diluent imports from the US used to process the country’s heavy crude oil. PDVSA and its US subsidiary, Citgo, has been described as Maduro's "lifeline" — Venezuela exported more than 1 million barrels per day to the US in 2018, a significant drop from last year, according to Refinitiv via Reuters.

Related: Why does oil matter so much to Venezuela?

On Monday, Guaidó asked congress to appoint new board members to PDVSA — just before the US issued fresh sanctions.

The US is now redirecting PDVSA payments directly to Guaidó as interim president and US national security adviser John Bolton said sanctions would block $7 billion in PDVSA’s assets “plus over $11 billion in lost export proceeds over the next year,” according to Reuters.

“Many of these high officials have fortunes in foreign banks and properties in foreign countries,” Smolansky says. “The sanctions have debilitated their possibility to move around internationally as well as their financial possibilities abroad. These sanctions have not hurt Venezuelans, they are individual sanctions coming from multilateral efforts of not only the United States, but also Canada, the European Union, and other Latin American countries.”

While “Chavismo” (socialist) elites were hit with a variety of sanctions over the last three years, they’ve done little to make an impact on ordinary Venezuelans, whose lives have spiraled into a humanitarian crisis as hyperinflation has driven nearly 3 million to flee.

“The sanctions have nothing to do with hyperinflation (projected to reach a 10 million percent this year), with the fall in oil production, or the food and medicine shortage that has generated a humanitarian and a migrant crisis. The only person responsible for that is Nicolás Maduro,” Smolansky adds.

Related: How Venezuela’s oil sector is coping with US sanctions

“The situation will deteriorate with these last sanctions especially, they could limit any transaction that Maduro’s government could make to import food and medicine."

Rafael Uzcátegui, director of local human rights organization Provea, laments the use of sanctions, however — particularly the most recent ones. Uzcátegui believes the sanctions will indeed have an important effect on Venezuelans’ everyday lives.

“The situation will deteriorate with these last sanctions especially, they could limit any transaction that Maduro’s government could make to import food and medicine,” Uzcátegui says. “We should remember that 70 to 80 percent of Venezuela’s food is imported, and there’s barely any medicine production in the country.”

Uzcátegui, too, holds Maduro and his government responsible.

“They have refused to recognize the severity of [the] crisis and have insisted in a series of public policies and decisions that have exacerbated the levels of poverty,” he says. “Moreover, they have promoted the usurpation of the presidential power after an electoral fraud, which is the origin of the current political crisis.” 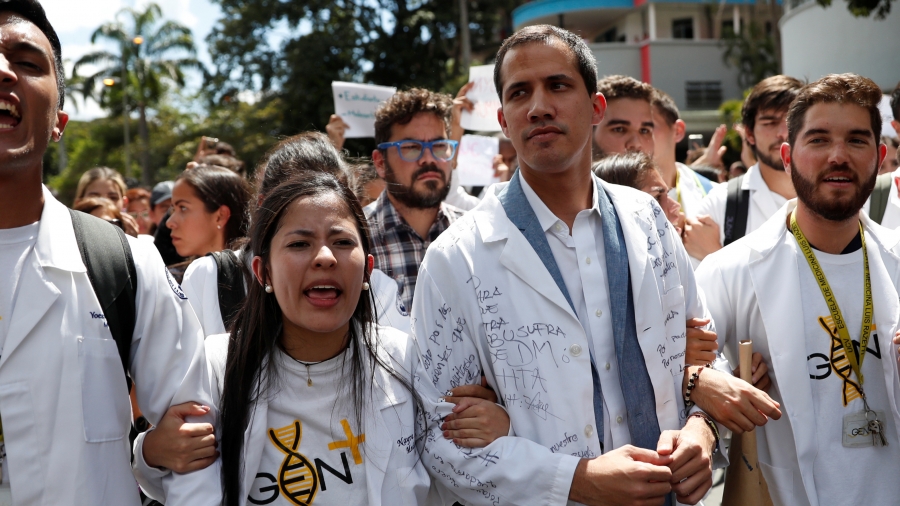 For Pedro José Garcia Sanchez, a researcher specializing in populism and authoritarianism at the University of West Paris-Nanterre, a sort of fusion of terms tends to happen, confusing economic blockade, sanctions and embargo.

“The sanctions target specific government officials, not the whole country,” Sanchez explains, which goes against the more simplistic ideological narrative that pits socialism against US imperialism circulated often in academia and the media.

An embargo bans exchange and trade whereas blockades prevent goods from entering countries, and economic sanctions are a far wider concept, defined by the threat of withdrawal or restrictions on financial relations.

“The sanctions target specific government officials, not the whole country" ... which goes against the more simplistic ideological narrative that pits socialism against US imperialism circulated often in academia and the media.

America’s global banking system is extensive and sanctions alone could prevent Venezuelan government officials from carrying out financial transactions or issuing new debt through US banks, says David Smilde, a senior fellow at the Washington Office on Latin America (WOLA). US sanctions imposed in 2017 attempted to prevent government officials from securing financial relief as living conditions continued to worsen.

Related: The US sanctions Venezuela's President Maduro and calls him 'a dictator'

Venezuela’s political crisis reached new heights of tension in 2017 when the Supreme Court of Justice effectively nullified the opposition-led National Assembly. The move was met with protests that lasted for months, and in which violent crackdowns left behind over 160 deaths, according to the Venezuelan Observatory of Conflict.

In response, the Trump administration imposed new sanctions against Venezuela, and Maduro accused the US of plunging Venezuelan citizens further into economic crisis.

“The idea behind this [2017] sanction is very specific, and it intends to limit the capacity of Maduro’s selling all of Venezuela’s assets,” Smilde says.

However, by the time those sanctions were implemented, Smilde explained, the legitimacy of Maduro’s government was already diminished. US sanctions became part of a larger and more complicated process of mitigating debt in Venezuela.

By law, Maduro must seek approval through the opposition-led National Assembly to borrow funds to deal with skyrocketing debt. But since 2017, Maduro has refused to recognize its authority, bypassing due process as a borrower.

“What can be said is that government could get around the sanctions if they recognize the National Assembly and pass debt through them — as it is stated in the Constitution,” Smilde added.

By 2018, the US list of government officials sanctions expanded, including First Lady Cilia Flores and Vice President Delcy Rodriguez, who had previously described the sanctions as “arbitrary and unlawful.” Other public pro-government figures claim these financial limitations have harmed Venezuelans directly, but the direct impact has been unclear.

“The official goal in 2015 was to punish government officials who were either corrupted or had committed human rights violations, as well as to deter other officials who would be willing to do the same,” says Smilde.

He says economic sanctions tend to have little palpable effects but are the best non-violent way to express disagreement toward a government. 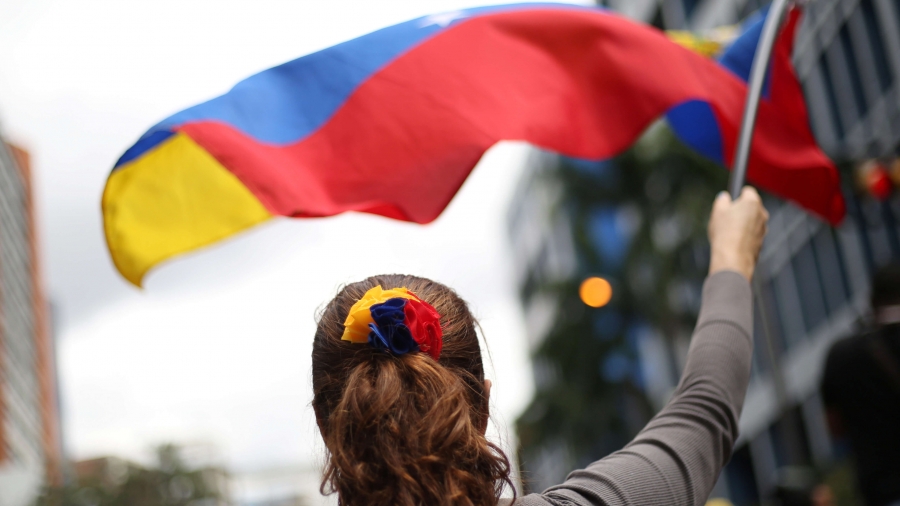 Meanwhile, Venezuela’s complex humanitarian crisis continues to expand. The United Nations High Commissioner for Refugees reported that, as of November 2018, more than 3 million of an estimated 32 million Venezuelans had fled their country since 2014. At the same time, the Venezuelan Observatory of Health highlighted that 94 percent of Venezuelans don’t have enough revenue to pay for basic supplies — especially food.

Censorship and control of information online, as well as mainstream media, has grown stronger and expansive in the last years. Venezuelan prisons and intelligence services offices hold more than 230 political prisoners and have arrested more than 12,500 people since 2014 in connection with protests, including underage minors, according to the Foro Penal, a Venezuelan network of pro-bono criminal defense lawyers.

For years, human rights organizations like Human Rights Watch have denounced the police and armed forces for abuses, saying that “in some cases amount to torture — including severe beatings, electric shocks, asphyxiation and sexual abuse.”

A 2019 report by Provea, a human rights group, estimates 250 people have been killed in protests during the Maduro era. And these numbers continue to soar, according to Provea.

As heated debates around intervention and foreign powers continue to fuel exchanges inside and outside Venezuela, everyday Venezuelans continue to brave harsh realities.

As heated debates around intervention and foreign powers continue to fuel exchanges inside and outside Venezuela, everyday Venezuelans continue to brave harsh realities.

On Jan. 30, thousands marched in Caracas on Jan. 30, calling for the end of Maduro, and power in Venezuela remains uncertain. The latest sanctions halt all US oil purchases in an attempt to put an end to what the US says is Maduro’s history of plundering PDVSA profits to private accounts, ultimately wanting to support Guiadó and push Maduro out of power.

A cautious hope grips Venezuela, but given the grim history of US interventions in Latin America, some fear a turn for the worse. The ones who pay — regardless of who intervenes — are the Venezuelan people.