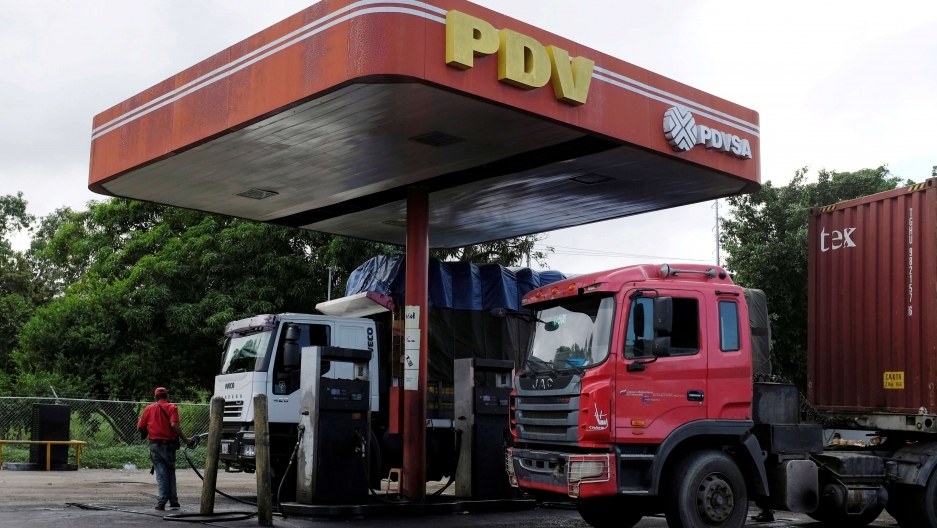 The corporate logo of Venezuelan state-owned oil company PDVSA is seen at a gas station in Cupira, Venezuela, Dec. 16, 2018.

Venezuela's energy sector has the power to shape politics in the country — it accounts for 95 percent of Venezuelan exports.

The US-based oil company Citgo is a subsidiary of Venezuela's state oil company, Petroleos De Venezuela SA (PDVSA). Citgo imports heavy crude oil from Venezuela and then refines and distributes it in the US.

Despite years of turmoil, PDVSA has acted as President Maduro's lifeline.

It became even more critical when the Trump administration blocked US revenue to Citgo, in a bid to force Venezuelan President Nicolás Maduro from office.

Scott Modell, the managing director of Rapidan Energy Group and former CIA officer in Latin America, sat down with The World's Marco Werman to help lay out why oil is such a big deal for the country in crisis.

So, why are the Trump administration's sanctions on Venezuela's state oil company so significant?

Citgo has been a critical revenue generator for PDVSA and the Venezuelan government for a long time. It's a company that's worth billions of dollars. It's the largest single buyer of Venezuelan crude in the United States. And lately, because domestic refineries in Venezuela are operating at such a low percentage of capacity, Citgo's been the largest provider of gasoline to Venezuela. Also critical is Citgo provides [exporting diluents or unfinished oils] used for blending heavy and extra heavy Venezuelan crude. So about 60,000 to 100,000 barrels a day have been flowing from the United States to Venezuela and Citgo has been playing a role in that as well.

I know the price per gallon of gasoline in Venezuela was one of the lowest in the world. Is it still?

It still is extremely low and people that I know who are there, including some of the folks who just recently returned from the US Embassy, said that when they used to go and fill up their tanks the gas station attendants would say, "Just pay me whatever you can." So literally, in some cases, gas is either free or very close to it — despite the crisis and hyperinflation.

Over the past decade or so, what kind of relationship has the state oil company PDVSA had with Venezuela's leaders like Hugo Chávez and Nicolás Maduro?

It's been very critical. In 2002, there was a massive oil workers strike against Chavismo and against Chávez. It was a tough time for Chávez, he solidified power. And one of the first things he did was to clear out PDVSA to make sure that it was no longer an anti-revolutionary organization and he gutted it. And since then, it has been a critical part of the power base in Venezuela and the entire Chavista establishment. And you know, despite the last three or four years of significant deterioration of Venezuela's oil sector, during which time people have expected another round of major oil worker strikes, that has not happened. When you look at the oil workers unions and you look at who is working there, there is no internal push against Maduro. PDVSA is not going to suddenly become a political actor that works with [Juan] Guaidó and puts pressure on Maduro.

We've seen political tension between Washington and Caracas for a long time now, but the economic relationship and this oil relationship didn't really seem to suffer. Citgo always seemed to somehow be insulated from the problems. Why is that?

When Donald Trump was elected — this goes back further than that. But I'll just fast forward to 2016. When Donald Trump was elected, Marco Rubio and a few others brought one of the opposition leader's wives — Leopoldo López, his wife Lilian Tintori — to the White House and made the case. And said, "We have a real problem and we actually need to do something we haven't done before — raise pressure to the next level and bring about regime change in Venezuela." And since then, the administration has tried to strike the balance between ramping up pressure but not wanting to throw Venezuela into a worse humanitarian catastrophe than it already is in. The decision on Jan. 10 of this year, however, for Maduro to swear himself in for another five years, tipped the [Trump] administration over to the point where it could no longer rely solely on individual sanctions. And they decided, obviously as you saw, to go right to the energy sector and have "crossed the Rubicon," so to speak, and I think they're now heading to a place where they're not going to stop until Maduro is gone.

Right. Just this week the Trump administration announced that it would block all US revenue to PDVSA. So what's the goal there and what effect could it have?

I think what they're trying to do is very similar to what they do in the case of Iran, is to cut off the streams of revenue to Maduro and the regime, but they want to keep barrels flowing. And this is very complicated because it's going to force Maduro and PDVSA to reroute 400,000 or 500,000 barrels a day that were going to the United States, to India and China and elsewhere. So it's making it harder and more expensive for PDVSA to do business and it's trying to redirect revenue streams to the interim president.

Do you think Citgo has a role to play in helping Venezuela out of this crisis?

That's the subject of real debate in Venezuela among the political opposition, it has been for some time, and even here in DC. The debate is: to what extent should it? And I think everybody agrees Citgo makes complete sense in any Petro economic recovery plan. It's worth several billion dollars. It is a key part of PDVSA's external operations and it's a great revenue generator. So, I think everybody agrees, we have to remove it as a source of revenue for Maduro in the short run. But in the long run, it's an important piece in the overall economic recovery plan that's going to bring Venezuela back on its feet.

Can you imagine a timeline for that?

I guess, there's two questions on the timeline. One is: how long does it take for this to play out, for either Maduro to hunker down and stay and us to go through more rounds of escalation between the US and Venezuela? Or: if Maduro goes, how long is it going to take for this recovery to take place? And in the latter, to get back to Venezuela's comfortable place where it had been up until three or four years ago at about 2.5 million barrels a day, it's going to take at least three to five years.