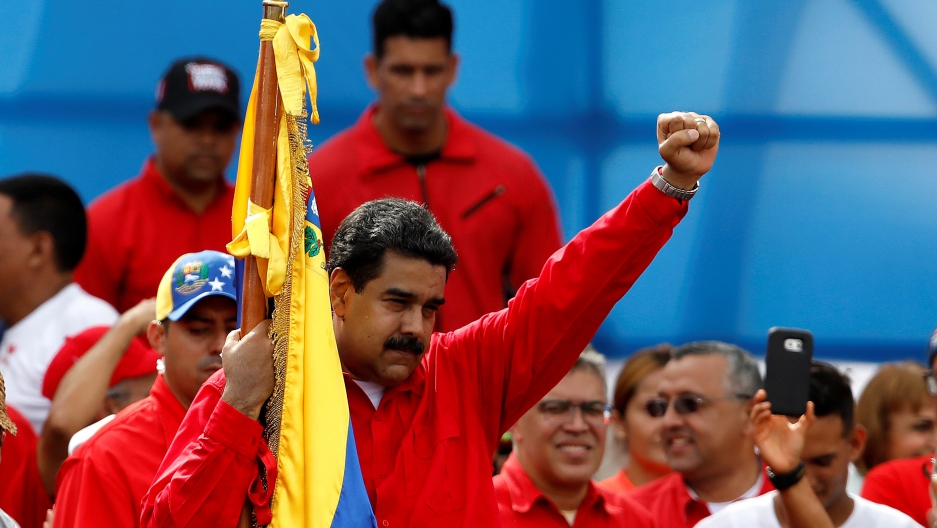 Venezuela's President Nicolás Maduro during the closing campaign ceremony for the Constituent Assembly election in Caracas, Venezuela, on July 27.

The United States on Monday branded Venezuelan President Nicolás Maduro a "dictator" on a par with Syria's Bashar al-Assad or North Korea's Kim Jong-un, and imposed sanctions on him.

"The United States stands with the people of Venezuela in the face of this oppression."

Sunday's vote in Venezuela to elect a Constituent Assembly that would supersede the country's opposition-controlled National Assembly triggered international scorn — and a US response.

"Yesterday's illegitimate elections confirm that Maduro is a dictator who disregards the will of the Venezuelan people," US Treasury Secretary Steven Mnuchin said.

"By sanctioning Maduro, the United States makes clear our opposition to the policies of his regime and our support for the people of Venezuela who seek to return their country to a full and prosperous democracy."

Washington has long been a critic of Maduro — and of his late predecessor Hugo Chávez — but Monday's statement marks the first time that senior officials have publicly branded him a dictator.

And the United States has already imposed sanctions on several Venezuelan individuals and organizations, but, in taking the rare step of targeting a sitting head of state by name, it signaled growing alarm at the crisis.

Mnuchin said Maduro was only the fourth foreign leader to be blacklisted in this way, and McMaster warned he had joined an "exclusive club" led by Assad, Kim and Zimbabwe's President Robert Mugabe.

The order does not, however, impose restrictions on Venezuela's huge oil exports to the United States — a key lifeline for the country's tottering economy but also its leftist anti-American government.

Mnuchin would not say whether oil sanctions are being considered, but noted that Trump had decided not to take measures that would hurt the "Venezuelan people" rather than Maduro's allies.

The Treasury secretary urged those elected to the controversial Constituent Assembly not to take their seats, and warned that any who support the imposition of "an authoritarian regime" will also face sanctions.

"As a result of today's actions, all assets of Nicolás Maduro subject to US jurisdiction are frozen, and US persons are prohibited from dealing with him," he said.

Mnuchin would not comment on whether his investigators believe that Maduro has any assets on US soil or liable to pass through the US financial system.

"Under Maduro, the Venezuelan government has deliberately and repeatedly abused the rights of citizens through the use of violence, repression and criminalization of demonstrations," he alleged.

"At his direction, the regime's security forces have systematically repressed and criminalized opposition parties through arbitrary detention, military prosecution of civilians and the excessive use of force against demonstrators.

"Any member of the opposition or critic of the regime risks being detained, imprisoned, assaulted, tortured and assassinated."