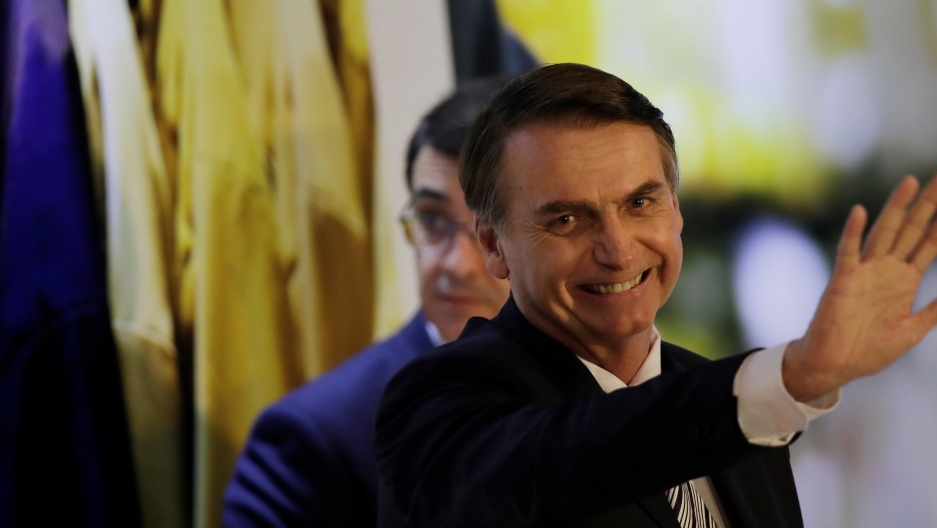 Brazil's President Jair Bolsonaro waves at an inauguration ceremony of the new president of the Parliamentary Agricultural Front in Brasilia, Brazil, Feb. 19, 2019.

The new costume trend at Carnival in Brazil, this year? An orange.

In local political slang, “orange” is a nickname for a fake front to a scheme, and during Brazil’s massive street celebration, festival-goers used the orange to express political satire — oranges abound under the new far-right president, Jair Bolsonaro.

In early March, after two months in office, Bolsonaro had already seen his inner circle linked to several corruption scandals. They involve orange bank accounts and orange female political candidates, commonly used in Brazil to cheat an affirmative action law requiring parties to field women as 30 percent of their candidates.

And so oranges samba danced through the streets, accompanied by songs and chants criticizing Bolsonaro.

The scandals have followed Bolsonaro to Washington, DC, where he will meet with US President Donald Trump Tuesday in a visit aimed at bringing the two countries together for geopolitical and commercial talks. 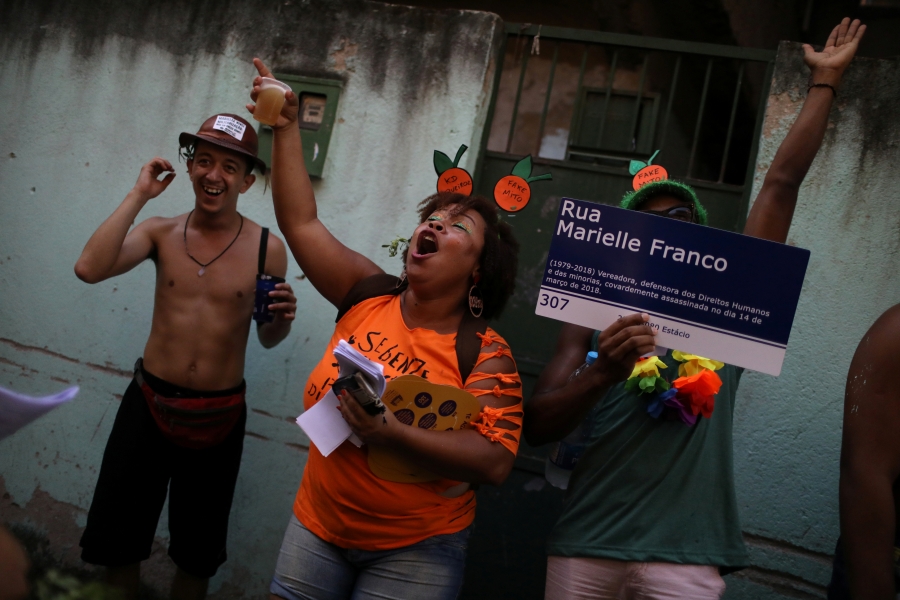 In Brazil, the carnival protests were consistent with the first major public opinion survey about Bolsonaro’s presidency, conducted in mid-February by pollster MDA. It found Bolsonaro’s government had 39 percent approval, more than ten percent lower than three other recent Brazilian presidents — from different political parties — at the start of their terms. The survey also says 57 percent of Brazilians thought Bolsonaro’s sons —  themselves lawmakers — were interfering in his political decisions, and 75 percent responded that family members should not influence the president’s governance.

Bolsonaro’s son Flávio, a Rio de Janeiro senator, has been in headlines for one scandal in which illegal money was allegedly transferred through an aide’s account, and another in which he employed, until recently, the wife and mother of a man investigated for leading a local death squad of ex-police officers.

Bolsonaro’s Secretary General Gustavio Bebianno and Tourism Minister Marcelo Álvaro Antônio have both been accused of campaign finance schemes in which they approved party payments to women’s campaigns that were then immediately transferred for a different purpose. The female candidates in question did not invest significant effort in their campaigns and avoided press — suggesting they collaborated to cheat a new law requiring parties to allocate 30 percent of election funds to women.

If the accusations are confirmed, said Alexandre Furtado, who voted for Bolsonaro, “it’s bad for [the president’s] credibility.” Furtado, 35, is a credit card machine salesman who says his vote was in part due to Bolsonaro’s promises to reduce corruption.

On issues from the environment to gun control, the president has made far-right shifts in a combination of executive orders and agency reassignments.

Meanwhile, Bolsonaro’s opponents see many of their worst fears confirmed. On issues from the environment to gun control, the president has made far-right shifts in a combination of executive orders and agency reassignments.

On the environmental front, Bolsonaro has moved the responsibility of assigning land for Indigenous use from Brazil’s National Indian Foundation (FUNAI) to the Ministry of Agriculture. “It’s crazy because their [Ministry of Agriculture] interests are totally different,” said Luti Guedes, who does community work in poor riverside communities in the northern Brazilian State of Pará. “We’re all expecting deforestation is going to be much worse,” Guedes says. Bolsonaro eradicated the government secretary on climate change and appointed an environment minister with a history of questioning official deforestation data.

The new administration has treated both public and private environmental watchdog groups as threats. Last week, environmental agency Ibama — responsible for environmental licenses and fines — was banned from communicating directly with the press, and Brazil’s Globo News reported that Bolsonaro seeks to disempower international environmental nongovernmental organizations’ capacity to act in the country.

Bolsonaro’s campaign also focused on anti-gay messaging and, in office, he has continued to stump for a bill that would ban sex education and anti-homophobia education from schools. “In a context in which the AIDS epidemic is growing among young people, this would have grave consequences, not to mention increase prejudice in an environment in which violence against and suicides of the LGBT population is already high," Rubens Raffo, technical coordinator for the Forum of AIDS NGOs of Rio Grande do Sulin, told The World.

“In a context in which the AIDS epidemic is growing among young people ... [a ban on sex and anti-homophobia education] would have grave consequences, not to mention increase prejudice in an environment in which violence against and suicides of the LGBT population is already high.”

On gun control, Bolsonaro issued a decree in January making it easier for Brazilians to buy firearms. In a gun control discussion sparked after a March 13 school shooting in São Paulo, Major Olímpo, a top senator and close Bolsonaro ally, said an armed teacher or public employee “could have minimized the size of the tragedy.” Bolsonaro has pledged to usher expanded permission to carry the bill through congress.

Still, Bolsonaro has faced speedbumps to his agenda at home — due to bickering among a fractured legislature — and criticism from abroad after threatening to withdraw from the Paris climate agreement and sharing a false smear story about a reporter investigating his family.

Bolsonaro told reporters last week that because he believes Brazil’s image has been promoted abroad in a “bad way,” he planned to replace 15 of his ambassadors to demonstrate that “I am not a dictator, homophobic or racist.”

But Bolsonaro’s far-right positions and crass communication style have found an ally in US President Donald Trump, whose reception of Bolsonaro in an official visit on March 19 heralds new alignments between Brazil and the United States on trade and military affairs in the hemisphere.

During this week’s visit, the US is expected to name Brazil a major non-NATO ally and be granted expanded access to a Brazilian airbase. The two countries will likely affirm their shared support for regime change in Venezuela, yet Brazil has repeatedly stated it opposes the use of military force — unlike the United States.

Related: Brazil sides with Venezuela’s opposition, but military intervention is off the table — for now

Trump and Bolsonaro “are two crazy guys, but as long as they don’t do anything too crazy, it’s all good,” said Furtado, the credit card machine salesman.

Physics student Luca Lopes, 24, who voted for Bolsonaro “because of his economic positions,” said the new government “is still in a maturation phase.” Lopes said that while corruption allegations against Bolsonaro contradict Bolsonaro’s campaign messaging, he understands them as “a system issue. Anyone in the system is subject to corruption.”

The president’s detractors remain vocal but acknowledge their lack of power. One of the only banners currently uniting Brazil’s tattered left is the significance of the case of slain Rio de Janeiro city councilwoman Marielle Franco, which advanced last week with the arrests of two alleged shooters. Franco was a rising political star earning attention for her black feminist organizing method — unusually horizontal for Brazilian left-wing politics — when she was murdered last March. 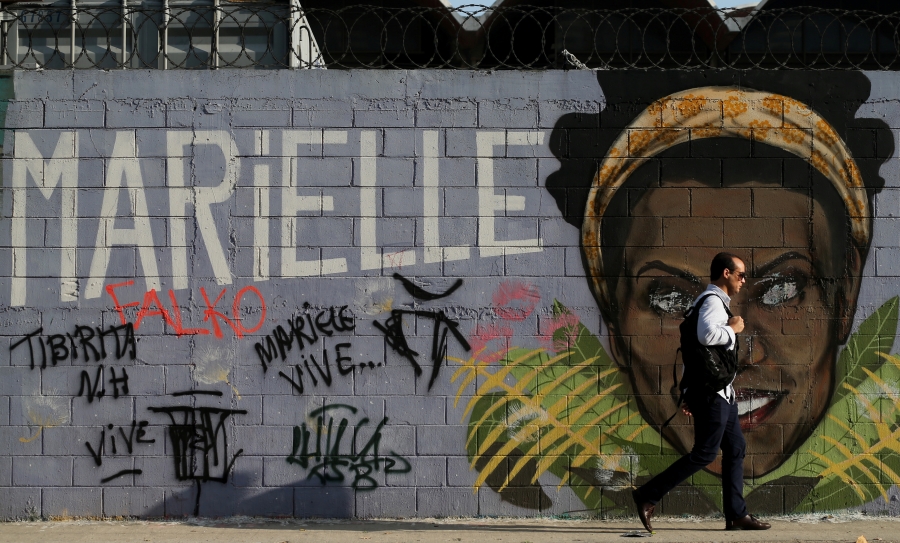 A man walks past a wall with an image of murdered activist and councilwoman Marielle Franco, in Rio de Janeiro, Brazil, March 13, 2019.

At Franco’s vigil last week, government social assistance worker Julia Sobreira, 33, said Franco’s capacity to mobilize people even after her death proves “we need to stop doing politics from the top down and start doing it from the bottom up.”

“Marielle [Franco] represents the force that can change the country, and which has grown under this beginning of the Bolsonaro government. Feminism.”

Thousands filled Rio’s Cinelândia plaza, many of them young women of color. “Marielle represents the force that can change the country, and which has grown under this beginning of the Bolsonaro government,” said Sobreira. “Feminism.”

For now, plenty of Brazilians are adjusting to the Bolsonaro administration as the new normal.