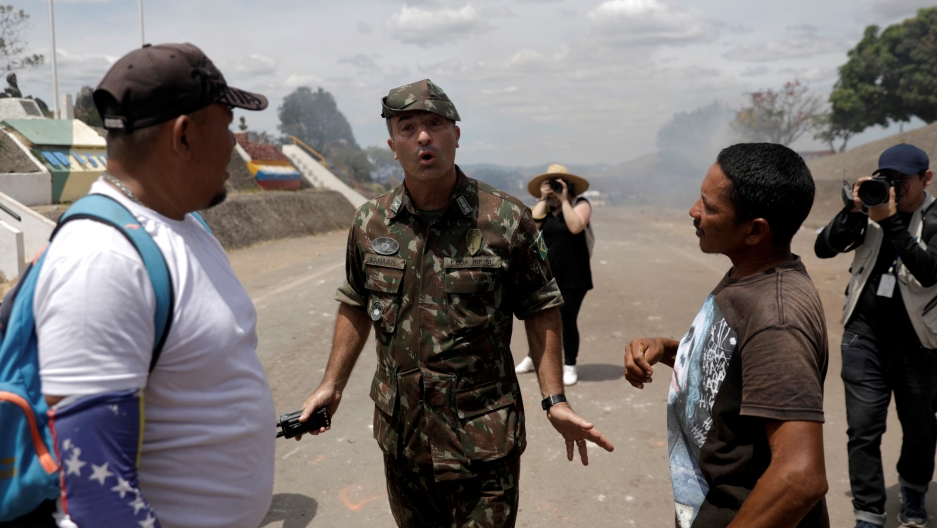 Brazilian President Jair Bolsonaro is headed to the United States on March 19 for a conversation with United States President Donald Trump, and the topic of Venezuela will likely be at the top of the agenda.

Tensions between Brazil and Venezuela intensified last month after violent clashes broke out on the border over a botched humanitarian aid delivery plan. While tensions have subsided and the possibility of armed conflict has been ruled out, relations remain strained.

Venezuelan opposition leader Juan Guaidó, who assumed presidential powers in January, attempted last month to deliver humanitarian aid into Venezuela through Colombia and Brazil, with US support. But Maduro adamantly rejected it and closed its borders with its neighbors.

“If humanitarian aid entered the country, Maduro would be demoralized and Guaidó would assume an even more presidential position … Any problem on the border would be attributed to … authoritarianism."

“If humanitarian aid entered the country, Maduro would be demoralized and Guaidó would assume an even more presidential position … Any problem on the border would be attributed to … authoritarianism,” said Tanguy Baghdadi, an international relations professor at Veiga de Almeida University in Rio de Janeiro.

When the aid plan failed, Guaidó did not rule out support for a possible military intervention that could lead not only Venezuela, but the entire region into an unprecedented crisis.

Brazil has increased troops at the border since 2017 when Venezuelan refugees first arrived. But last month, they decided not to send additional troops to avoid further tension. Yet, divisions between Brazil’s military and diplomatic factions have impeded a unified response to Venezuela’s deepening instability.

“The US is open about its intention to remove President [Nicolás] Maduro, both by supporting the opposition and acting diplomatically,” said Flávio Rocha de Oliveira, a professor at the Federal University of ABC. Brazil has also made it clear that they recognize Guaidó as Venezuela’s legitimate leader.

But Brazil’s military leaders have been more open to dialogue with Maduro, and military intervention is unlikely — for now.

In 2017, over 52,000 Venezuelans arrived at the Brazilian border, fleeing dire living conditions such as a lack of food and medicine and intensive crackdowns on dissent. A mass power outage since March 10 this year has only made conditions worse.

The 3,200 soldiers of the army's 1st Jungle Infantry Brigade spread out between Roraima and Amazonas were relocated to checkpoints between Boa Vista, Roraima’s state capital, and the Venezuelan border in August 2018.

In February, the government had doubled the number of troops stationed at the border in Roraima from 100 to 200 soldiers exclusively on regional patrol. In addition, 120 soldiers and health volunteers from the National Public Security Force were also deployed to the region.

“The number of Venezuelans arriving was so large that it became a regional problem — the state had no infrastructure to receive them and conflicts began to erupt in Boa Vista and at the border. ... Temer came to the conclusion that the only public institution capable of dealing with the situation was the army."

“The number of Venezuelans arriving was so large that it became a regional problem — the state had no infrastructure to receive them, and conflicts began to erupt in Boa Vista and at the border. ... Temer came to the conclusion that the only public institution capable of dealing with the situation was the army,” Santoro said.

By April 2018, the number of refugees entering the country reached 800 per day.

According to Baghdadi, Brazilian border troops have continued to increase since 2017 due to the influx of refugees and the virtual collapse of Roraima's infrastructure. “An escalation of tensions is possible, but unlikely at the present time, considering, of course, the military support that each side would receive from other countries.”

Russia, standing firm with Maduro, has sent two nuclear-capable bombers to Venezuela and, according to Reuters, the country possesses 5,000 Russian-made, MANPADS surface-to-air weapons. In 2009 alone, the Venezuelan government received about $2 billion to spend on Russian armaments and between 2005 and 2009, Maduro had more than 30 active contracts for the purchase of military equipment.

Even though Brazil’s military capacity is strong, there is “concern about the displacement of Russian S-300 missile batteries to a region close to the border, which inhibits the action of aircraft on the Brazilian side,” said Flávio Rocha de Oliveira, the professor at Federal University of ABC.

The Russian-made S-300 Air Defense system has a range of 186 miles, and the Maduro government positioned it near the border with Brazil, in the city of Santa Elena de Uairén, to guarantee Maduro’s no-fly zone decreed at the beginning of the humanitarian aid standoff to prevent aid entering from Brazil.

Bolsonaro and his government have disputed the best way to approach the deepening crisis with Venezuela. Brazil’s military has been cautious about a military solution, but Minister of Foreign Affairs Ernesto Araújo defends a more proactive, interventionist position.

Araújo said that Brazil had taken the US’ lead in recognizing Guaidó and therefore, supporting regime change. He called for the end of the so-called "consensus diplomacy" — a policy that seeks cooperation with developing countries or the "global south" — which he believes enabled Chavismo power for too long.

His views put him at direct odds with Vice President and retired Gen. Hamilton Mourão, who advocated for opening a dialogue with Maduro.

In fact, Brazil’s military “opposed the participation of Brazil’s … attempt to deliver humanitarian aid — the military's view is that Brazil did its part by offering help, but once the Venezuelan government refused, that was it,” Santoro explained.

Ultimately, Araújo’s diplomacy won, and Brazil attempted to send two trucks with humanitarian aid (with medicine and food donated by the US), part of the 178 tons of food and medicine that the Brazilian government has stored with US assistance.

During the standoff, Venezuelan soldiers threw tear gas into Brazilian territory amid violence that resulted in at least four deaths in the city of Santa Elena de Uairén.

“Since then, [Araújo] has been under the tutelage of various military personnel of the Bolsonaro government, namely the generals Hamilton Mourão [vice president] and Augusto Heleno [of the GSI, Institutional Security Cabinet],” journalist José Antônio Lima said.

Mourão’s presence at a meeting of the Lima Group, a body of several Latin American countries and Canada, on Feb. 25 in Peru made it clear that he — not Araújo — represented Brazil’s position, said José Antônio Lima.

“Bolsonaro did not take a firm stance on how to respond to this crisis. This has led to a growing discomfort among the military wing,” who opposes any kind of armed confrontation, and that “tends to be sympathetic to negotiations with Venezuelan military and members of the government,” said Baghdadi, the international relations professor at Veiga de Almeida University.

“By recognizing Guaidó and breaking off military cooperation with Venezuela, [Brazil] burned that bridge with the regime."

“By recognizing Guaidó and breaking off military cooperation with Venezuela, [Brazil] burned that bridge with the regime,” said José Antônio Lima.

“Regardless of what happens in Venezuela, Brazil … will try to appease the situation on the border,” José Antônio Lima said. The Brazilian military intends to prevent a major conflict at the border and is betting on negotiations.