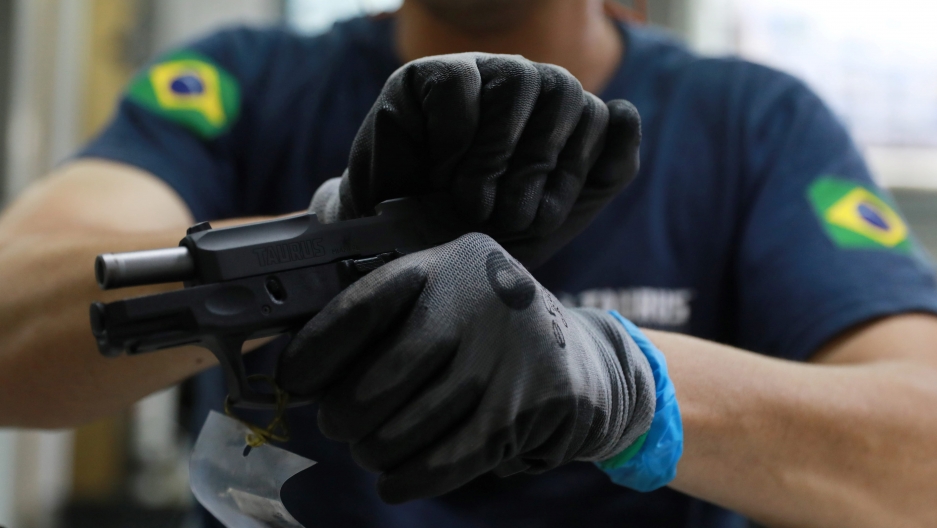 On a Saturday afternoon at a shooting club on Rio de Janeiro’s outskirts, 58-year-old court officer Márcio Monteiro takes aim at a paper target. He fires standing, kneeling and with one hand. He and four others have just learned how to load and fire a .38-caliber revolver for the first time as part of a shooting safety and basics class, a requirement in Brazil before purchasing a gun. The students — in addition to Monteiro, a doctor, an office administrator, a bus company owner and a nutritional supplement saleswoman — each paid around $240 for the day’s instruction.

“Everyone should learn to shoot,” he said. “It’s part of our right of legitimate defense.”

Buyers no longer need a police statement attesting their need for a weapon, and are only required to renew their license every 10 years, rather than every five. Monteiro thinks he will also soon have more options for where he can take his new gun, because in addition to Bolsonaro, Brazil voted in a new Congress that took office in January, removing several scandal-plagued centrist and leftist politicans in favor of right-wing newcomers. Monteiro anticipates an expanded pro-gun caucus will do as they campaigned and pass legislation allowing citizens to carry guns in Brazil’s streets and workplaces. 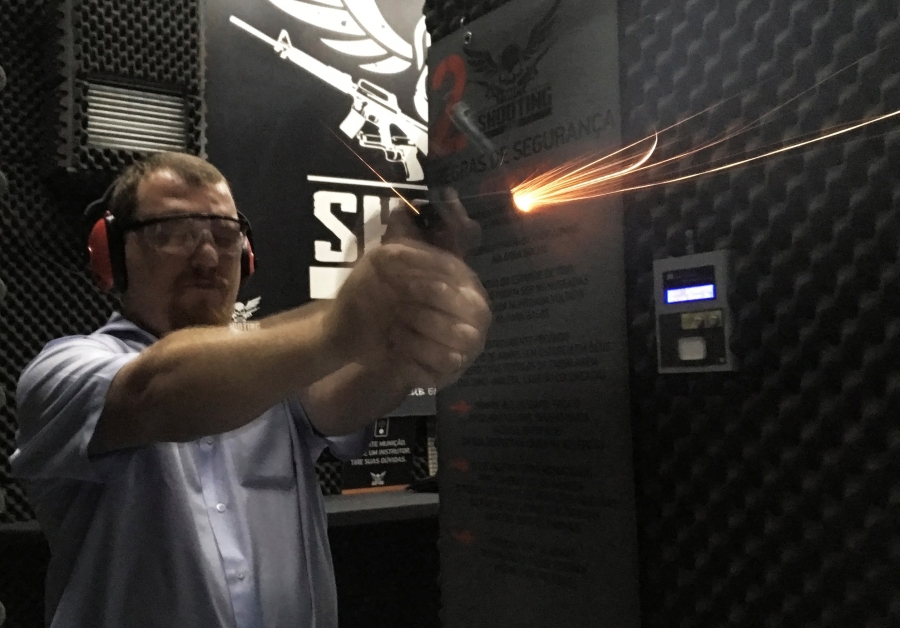 Brazil’s academic research community overwhelmingly predicts these measures will lead to more violence in a country with around 43,000 gun deaths per year. But in the Bolsonaro era, their arguments are losing to a political bloc that is resolutely opposed to empirical research and that takes many of its cues from pro-gun campaigners in the United States.

Bolsonaro’s close political circle and Congressional allies — the bedrock of Brazilian social conservativism and right-wing economics — often cite a set of Brazilian pro-gun activists who criticize what one, Bene Barbosa, called “a clear bias” in Brazilian academia against gun control. Barbosa said when Brazil’s current gun regulations were debated in Congress in 2003, “we had to look for literature and experiences abroad that were already consensus,” leading Brazil’s pro-gun movement to research and arguments from American pro-gun advocates.

At the time, NRA lobbyist Charles Cunningham visited Brazil to strategize; since then Barbosa and fellow commentator Fabrício Rebelo have helped popularize NRA slogans in Brazil — such as “the only way to stop a bad buy with a gun is a good guy with a gun” — and the work of American pro-gun economist John Lott, author of the 1998 book “More Guns, Less Crime.”

Though Lott’s work is surrounded by controversy in the United States, where findings from the book have been debunked by groups such as the National Research Council, Barbosa said, “I continue seeing a coherence that is plenty strong in his studies.”

Bolsonaro’s sons, themselves politicians who campaigned along side their father in October’s election, proudly told supporters in 2017 via Facebook Live about meeting with NRA representatives at a Las Vegas gun convention. The group discussed “what’s happening in the politics and culture in Brazil,” said Carlos Bolsonaro, “where individual liberties are punished.” 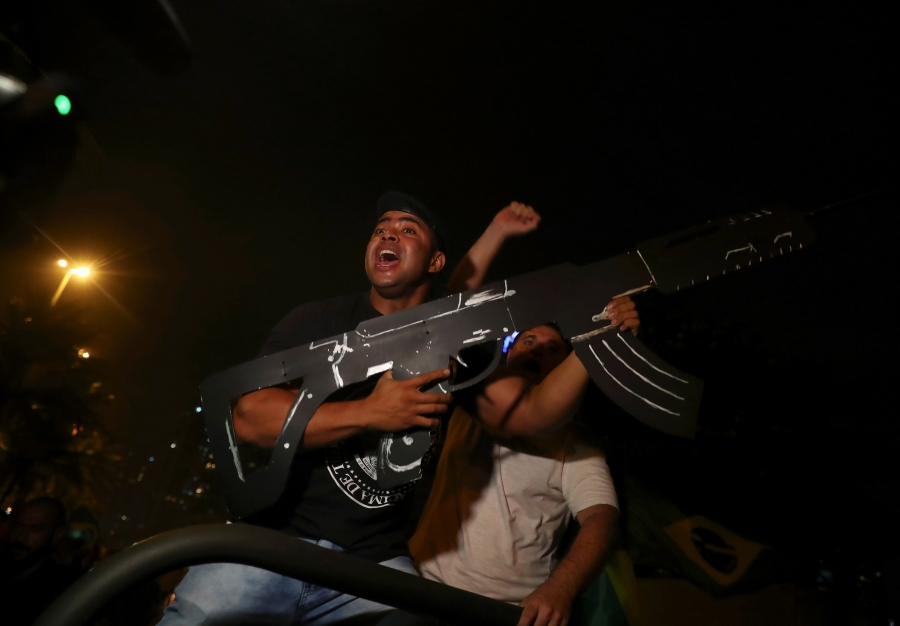 The framing of the gun debate around individual liberties — rather than collective safety — is far more American than Brazilian.

Like most countries in the world, Brazil does not have a constitutional right to bear arms. In 2003, its Congress passed a law implementing strict background check and documentation requirements for civilians seeking to buy guns. It was part of a gun control trend across Latin America, based on Brazilian and international research that found that fewer guns circulating led to fewer gun deaths.

In the past five years, public support for the right for civilians to own firearms has slowly grown from 30 to 37 percent in Brazil. Bene Barbosa says partial credit is due to the growth on the internet and on college campuses of youth libertarian movements that understand gun rights as part of “individual choice” for security.

Many Brazilians, such as court officer Monteiro, also have grown more attracted to the idea of owning a gun for personal protection as they have observed daily violence rise and have concluded that “the government is unable to provide your security.”

Bolsonaro’s vague pledges to make Brazil safer with more guns were neither fully detailed nor fully questioned during a presidential runoff election in which he refused to debate his opponent.

Samira Bueno, director of the research coalition Brazilian Forum on Public Security, said Brazil’s current public conversation on guns is an example of “a process of complete devaluing of scientific knowledge” underway in the country. She points to a study on the effects of the 2003 gun control law that won the two biggest research prizes in Brazilian economics. The study concluded that a 1 percent increase in guns circulating in Brazilian cities is equivalent to a 2 percent increase in the homicide rate.

“Even if you prefer to argue about gun ownership from a rights standpoint, the legal provision for self-defense in Brazil is in the penal code, which is subordinate to constitutional rights such as security,” said Bueno in an interview. It was that right to security upon which the 2003 gun control law was based. Changing the law, she said, “should only be possible through broad debate in Congress, not through decree.”

Polled in December by the firm Datafolha, 61 percent of Brazilians said they believe “gun ownership should be prohibited because it threatens people’s lives.”

“People understand that Brazil’s gun control law had a huge impact on homicide reduction,” said Melina Risso of the Igarapé Institute, an independent think tank. In the first four years after it was implemented, Brazil’s homicide rate fell, according to the federal Institute of Applied Economic Research. When it began to rise again, it did so at a rate 10 times lower in the 13 years after the law was passed than it had risen in the 13 years before the law. 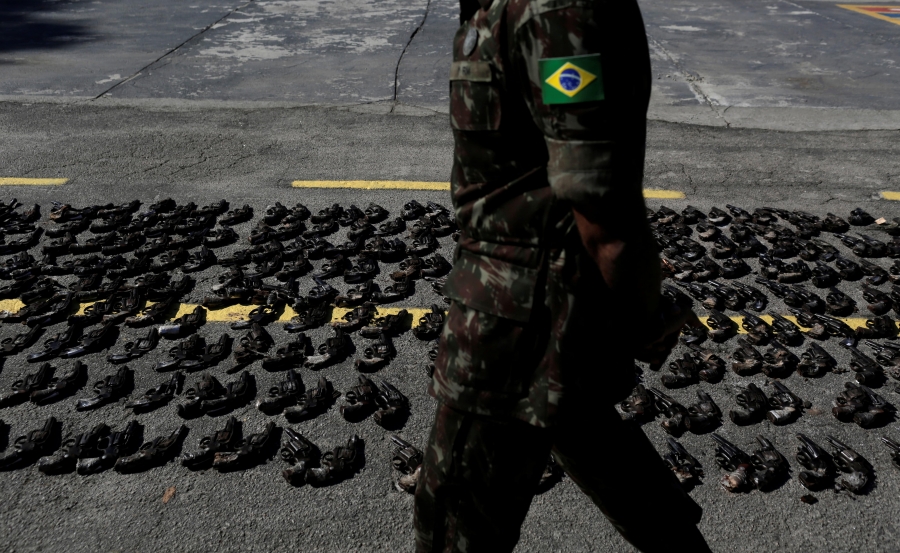 A Brazilian soldier walks past guns seized from criminals by the armed forces before the guns are destroyed in Rio de Janeiro, Brazil June 20, 2018.

Still, the fact that homicides continued to rise remains a talking point for Brazil’s pro-gun camp, including, most recently, for Bolsonaro’s justice minister Sérgio Moro.

“If gun control was so successful,” Moro told reporters in January, “the country would not have record numbers of homicides.”

Risso, Bueno and economist Daniel Cerqueira, who authored the award-winning study on gun control, point to other factors behind Brazil’s continued homicide creep: the growth of gangs in overcrowded prisons and authorities’ lack of commitment to evidence-based methods of reducing violence. Several Brazilian states in the past decade successfully reduced killings by focusing on prevention and intelligence, setting monthly progress goals overseen personally by state governors. In states that did not prioritize these measures, homicides skyrocketed.

Roughly half of all Brazilian homicides occur in two percent of the country’s cities, many of which, according to Cerqueira, are hot spots for gang conflict and where lawmakers do not prioritize intelligence and prevention-based security policy.

“We don’t need to re-invent the wheel,” to improve security in Brazil, Cerqueira said, but focus on “impact monitoring and strategies based in the scientific method.”

The loosening of arms control, he said, is a step in the opposite direction.