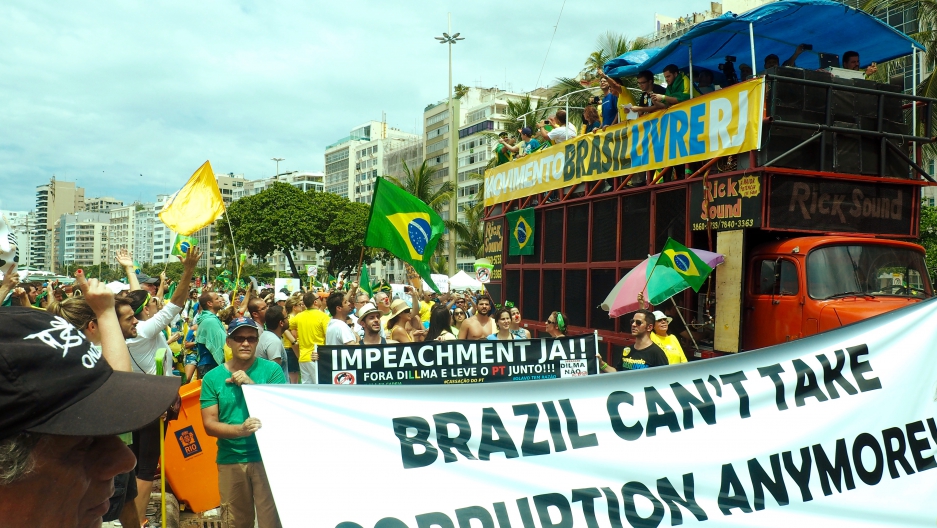 Protesters hold a street demonstration in Rio de Janeiro on Sunday, calling for the impeachment of President Dilma Rousseff.

At every turn of Brazil’s political crisis — today it’s ex-president Lula's struggle to take a spot in President Dilma Rousseff’s cabinet — there is a group of protagonists looking familiar who are neither politicians nor anti-corruption investigators.

They are young, organized right-wing demonstrators, and they may be a scale-tipping force in the question of whether Brazil’s Congress votes to impeach the current president.

Engineering student Pedro Souto, 22, rode atop one of the soundcars with a Brazilian flag draped around his shoulders like a Superman cape during Rio’s Sunday protest. More than 200,000 people turned out. The soundcar had a banner announcing the Free Brazil Movement, or Movimento Brasil Livre, one of the main groups that organized nationwide protests on March 13 and that continues to call members to the streets with each new development in Brazil’s political drama (which now come daily). 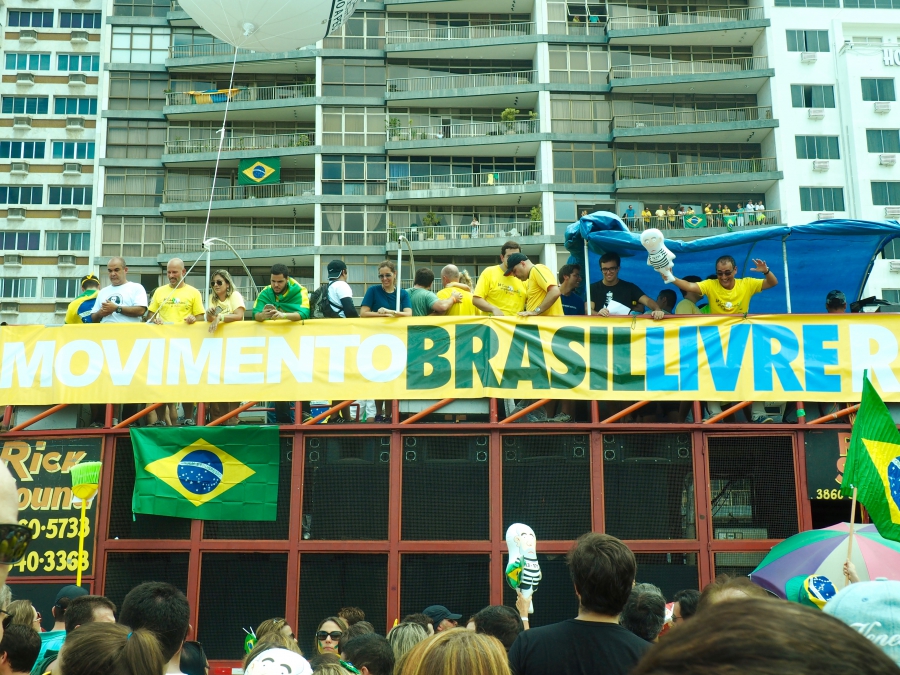 Pedro Souto, Bernardo Santoro and other protesters stand atop the Free Brazil Movement soundcar during a protest in Rio de Janeiro on Sunday.

The Free Brazil Movement was founded by members and alums of another group that's been spreading fast in this country: Estudantes Pela Liberdade, “Students for Liberty.” By liberty, they mean libertarian: they favor cutting government spending, privatizing state companies and reducing regulation.

These policies are far from how Brazil is set up right now. Like many Latin American countries, Brazil is a social welfare state with universal healthcare and many companies that are partly government-owned.

But for the last few decades, pro-market, anti-regulation think tanks have been growing in the region. Economist Bernardo Santoro is part of that movement in Brazil. He recalls attending an event in Rio de Janeiro state in 2012 that was organized in part by a group called Atlas Network.

There, attendees talked about the future of libertarianism in Brazil, brainstorming “ideas for how the movement in Brazil would grow up, and bringing Estudantes Pela Liberdade — Students for Liberty — to Brazil was one of those ideas.”

Both Atlas and Students for Liberty are based in the US, and both have received tens of thousands of dollars in funding in the last five years from American sources like the John Templeton Foundation and the Charles Koch Foundation, the billionaire-backed group known for supporting far-right causes.

Students for Liberty’s Brazil chapter got its start with grants from American donors, but now the group is mostly funded from inside Brazil, according to director Juliano Torres. And it’s big, with more than a thousand members.

Now, roughly half of all Students for Liberty members worldwide — who get training materials on how to plan events, raise money, and speak in public — are Brazilians. A handful have traveled to the US for trainings, and many discuss economic policy using references such as the Cato Institute and US Senator Rand Paul.

Torres said the student libertarian movement grew so much in Brazil because “we took advantage of the unpopularity of the president and the Worker’s Party.” In 2014, the Brazilian economy slowed and began to contract dramatically, and headlines featured the Worker’s Party’s involvement in the Petrobras bribery scheme.

“Students for Liberty is not a political organization,” says Torres, “but we encourage that our members are politically active.” In 2014, members and alums of Students for Liberty founded the Free Brazil Movement and helped found the Vem Pra Rua movement in order to protest against Rousseff. Rousseff has not been charged in the Petrobras anti-corruption probe, but since last March, the Free Brazil Movement has tried to build pressure to get her impeached in favor of a more pro-business president.

In December, Brazil’s house speaker Eduardo Cunha of the PMDB party filed impeachment charges, alleging illegal use of money in her 2014 budget.

“What’s going on in Brazil right now, we want to learn from and we want to figure out how to take their best practices to implement in other places,” says DC-based Students for Liberty coordinator Sam Teixeira. Teixeira says in political situations where the government is unpopular, it is easier to advocate for opening markets as a solution.

“At the end of the day,” says Teixeira, “we want to see people doing well, people happy, people prosperous. Being able to live the life that they choose and have autonomy. Those are things that don’t exist in Brazil or most parts of the world. We really hope and believe that the libertarian philosophy can bring prosperity and happiness to the world.”

Political scientist Celso Barros, who is a columnist for Folha de São Paulo newspaper, says “the majority of Brazilians would never vote for libertarian policies. All you need to do is walk into the nearest favela to have someone explain to you that we're a long way from meritocracy in Brazil.”

Barros says some economic reforms are necessary in order to make it easier to do business in Brazil. But he adds that the increasing likelihood that President Rousseff won't finish her term — be it because of impeachment or a ruling about her 2014 campaign finances — means that in the short run, Brazilians are likely to see economic policies that are harsher than voters would accept through the normal election process.

The PMDB has quietly released an economic platform that is farther to the right than their historic party line. About concrete changes we’re likely to see, “the right would like to have less labor regulations,” says Barros. “They would love for unions to be less powerful.”

Bernardo Santoro says regardless of who next assumes the presidency, the Free Brazil Movement will continue to push for reducing the size of government.

For Barros, what’s most concerning is the precedent set for future stability in Brazil if Rousseff is impeached on what he describes as “weak charges.” He, too, sees an echo of American politics in young groups leading the impeachment charge: “These guys are clearly inspired by the Tea Party and the recent radicalization of the Republican Party.”

Barros says what’s ahead for Brazil is unknown.