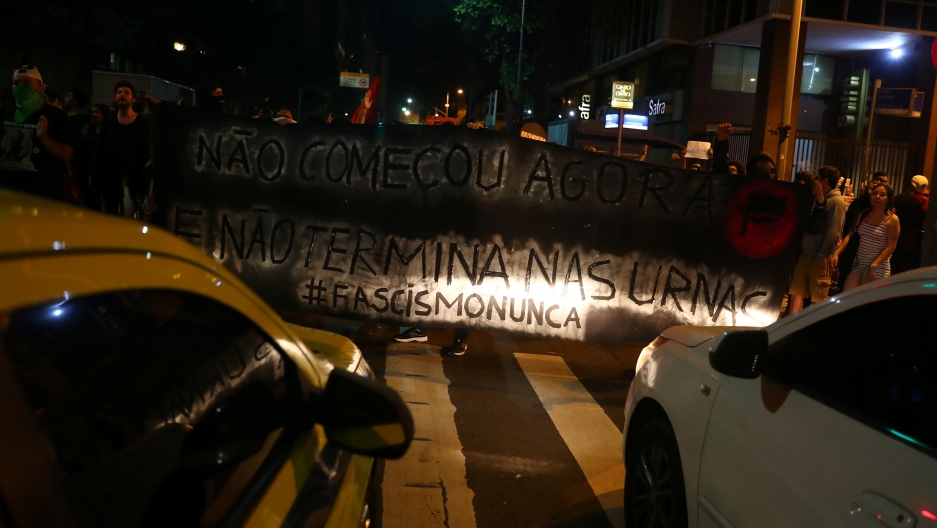 Protesters stop the traffic during a demonstration of resistance against Brazil's president-elect Jair Bolsonaro in Rio de Janeiro, Brazil, Oct. 30, 2018.

Though Brazil’s presidential election is over, its new heights of polarization appear here to stay among society. In addition to sparking public violence, political divisions have cut deeply into the private lives of Brazilian families.

One week after Brazil voted in the far-right Jair Bolsonaro as their next president, I met up with a 35-year-old banker from Rio de Janeiro named Raquel to speak about how the election had affected her relationships.

She asked that her last name not be used because she is worried about online harassment as a result of her political beliefs. Raquel voted for the left-wing candidate, Fernando Haddad of the Workers’ Party, who lost in the runoff with 45 percent to Bolsonaro’s 55 percent.

She said Haddad was not her ideal choice, but rather a vote “to try to block Bolsonaro,” whose “hateful discourse toward women, black and LGBT Brazilians” she considers unacceptable. And Haddad did fit Raquel's requirement for a candidate who campaigned on a pledge to reduce inequality.

Raquel’s mother voted for Bolsonaro. Though the two women have voted differently in the past, for the first time, political discussions between the two became “impossible,” said Raquel.

Bolsonaro, a former army captain and seven-term congressman, styled himself as a corruption-free opposite to the Workers’ Party, which participated in massive bribery scandals in recent years. But Bolsonaro also gained followers by lambasting minorities, praising Brazil’s former dictatorship and inflaming culture wars with false information, such as claims that Haddad created educational material in order to turn schoolchildren gay.

Raquel said her main challenge with her mother was a barrage of false information her mother read and shared on WhatsApp and Facebook. Despite pledges from Brazil’s government and social media companies to combat online misinformation during the campaign, one fact-checking group alone identified 113 election-related hoaxes that were shared over 3.8 million times on Facebook and Twitter. Fact checkers Bárbara Libório and Ana Rita Cunha wrote that the total shares across all platforms were far higher, “given that the biggest vector of disinformation in this election was WhatsApp — a closed platform.”

“It’s sad and disappointing,” Raquel said, to see her mother, an educated woman, spreading conspiracy theories and refusing to accept critiques of them. Raquel unfollowed her mother on Facebook and the two have not spoken about politics for weeks, though she hopes it will eventually be possible.

Elsewhere across the country, family feuds have broken out, doors have been closed to relatives and Christmas celebrations have been canceled.

Political analyst Marco Bastos said Brazil’s “major economic crisis” is key to understanding its current state of affairs, as is mistrust in political elites after the Car Wash anti-corruption probe. Within this context, “the culture war was instrumentalized by the alt-right as a way to get traction,” he said.

And those factors led to one of Brazil’s most polarizing campaigns in recent history: approaching the election’s first round, Bolsonaro and Haddad each had rejection rates, the percent of voters who would never vote for them, higher than any other two frontrunners since 2002.

Bolsonaro in particular specialized in targeted social media campaigns to set his own political narrative.

“There’s quite some evidence that would suggest the president-elect thrives on polarization and that he actively creates threats and enemies,” said Fundação Getúlio Vargas international relations professor Oliver Stuenkel.

Stuenkel said Brazil’s polarization and flood of online misinformation have parallels in other parts of the world, like the United States, India, South Africa and Venezuela. As fake news becomes more sophisticated and “people increasingly live in separate universes, in a sense,” he said creating “international networks and globalizing this debate about how to deal with polarization” become all the more important.

Even after the election, Bolsonaro has continued to verbally attack his political opponents and the media, saying “we can’t continue flirting with socialism, communism, populism and extremism of the left,” and that “almost all of the fake news directed against me came from Folha de São Paulo,” Brazil’s largest newspaper, which he said “is over.”

Because Bolsonaro is not moderating his tone, Bastos says it is up to the rest of society “to maintain a healthy dialogue about politics” — especially among people who voted differently. He believes it is possible with patience and effort.

So, too, does Raquel. Since August, she’s even been dating someone who voted radically different.

Raquel met 33-year-old Renan, who works at a pharmaceutical company, on Tinder. They didn’t talk about politics on their first date “because when you’re trying to win someone’s heart, you avoid controversial topics,” he said. They talked families, books and jobs, and Renan said “the conversation was so good we only started kissing after we asked for the check.”

But it was election season, and it wasn’t long before Raquel sent him a quiz about which candidate best matched his values.

Renan says his main political belief is in the importance of free-market economics. He told Raquel he was so unhappy with the way the Worker’s Party had governed for 13 years, during which “Brazil grew much less than it should have,” that if the party made it to the runoff, he would vote for any opponent, even Bolsonaro.

“Oh, my God,” she remembered thinking. “How is this possible?”

Raquel thinks Bolsonaro’s ideas are “violent, aggressive and racist.” So she talked them through with Renan. And he said he agrees with that view.

However, Renan said his vote for president would be based foremost on “what, economically, he is willing to do,” and that he believes the social issues Raquel cares about can only be resolved by first “reducing the fiscal deficit, reducing bureaucracy and encouraging entrepreneurship.”

The couple has discussed the election — and now the new administration — constantly. And they both say that’s made them respect each other more rather than less.

It’s important “to listen to the other person,” said Renan, and to make sure everyone is basing their ideas on trustworthy sources. He and Raquel say they each recognize the trade-off they are making in their decision — and that they are open to changing their minds.

“It hasn’t happened yet,” they both said. But still, they have decided not to get angry.

Raquel recalled the many times Brazilian politicians have made deals with supposedly sworn enemies in recent years.

“If tomorrow it’s in their interest to ally with each other, they will do it,” she said. “This division and fighting is only real between us, everyday people.”