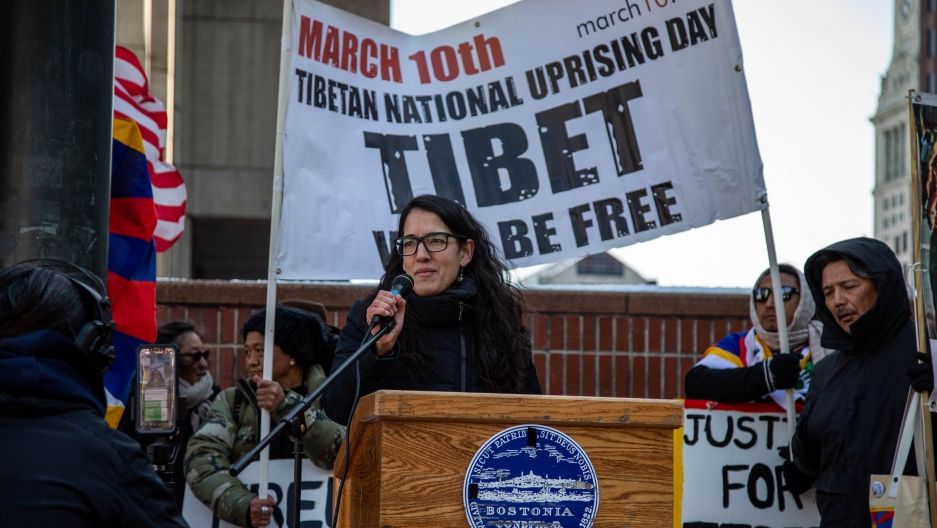 A Tibetan flag flutters alongside a Massachusetts one and the US flag outside Boston City Hall, marking the 60 years since the Tibetan uprising in Lhasa prompted the Dalai Lama to flee his palace.

A group of Tibetans and activists gathered on a frigid Friday to hoist the flag, which will fly through March 14.

Lhadon Tethong held her 2-year-old son in her arms as the flag was raised. Like her son, Tethong was not born in Tibet.

Her father fled his homeland after the uprising, so she was born in Canada and never lived in Tibet. Tethong, director of the Tibetan Action Institute, has been an activist most of her life. 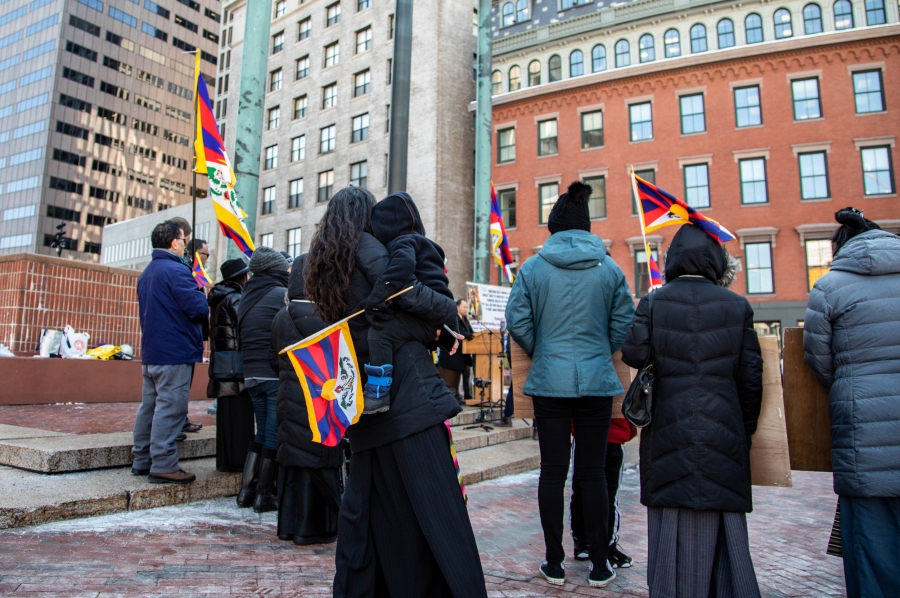 Lhadon Tethong holds her son while the activists watch the Tiben flag go up the flagpole in front of Boston City Hall.

The March 10 anniversary is a bitter one for Tibetans, she says.

“It was the ultimate sort of breaking moment for their lives, for people fleeing into exile, for His Holiness leaving Tibet.”

“It was the ultimate sort of breaking moment for their lives, for people fleeing into exile, for His Holiness leaving Tibet,” Tethong said. “For all the Tibetans that have lived like my father in exile for so long, who thought for a very long time that they would be going home. Sixty years is a long time. And so that sadness … I think every Tibetan — and I feel it — even having been born and raised in the West.”

The Dalai Lama was supposed to attend a dance troupe performance on March 10, 1959, but he was told he could not bring soldiers, and his bodyguards could not be armed. Soon, thousands of people in Lhasa surrounded the Norbulingka palace. A few days later, the Dalai Lama fled Lhasa for India. Tibetan rebels launched an attack on March 19, but Chinese troops captured the city on March 25. Some 87,000 Tibetans were killed, and some 100,000 fled as refugees.

“After a decade of China trying to consolidate its rule in Tibet, Tibetans were saying enough is enough,” Tethong explained. “‘China out! Tibet for Tibetans!’ These are the slogans that they used.” 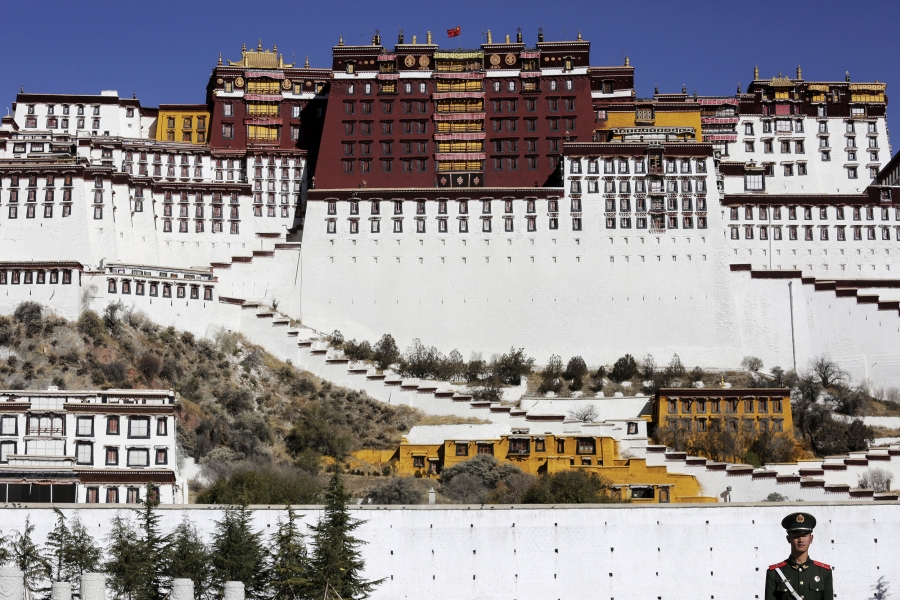 A paramilitary policeman stands guard in front of the Potala Palace in Lhasa, Tibet Autonomous Region, China. The Potala Palace, once the seat of Tibetan government and traditional residence of Dalai Lama, is 1,300 years old and is a UNESCO World Heritage site.

Tethong, now 42, first became an activist in college. The Free Tibet movement is less prominent than it was in the late 1990s and early 2000s — there are fewer “Free Tibet” bumper stickers  — but support of the movement meant a lot to activists and Tibetans. 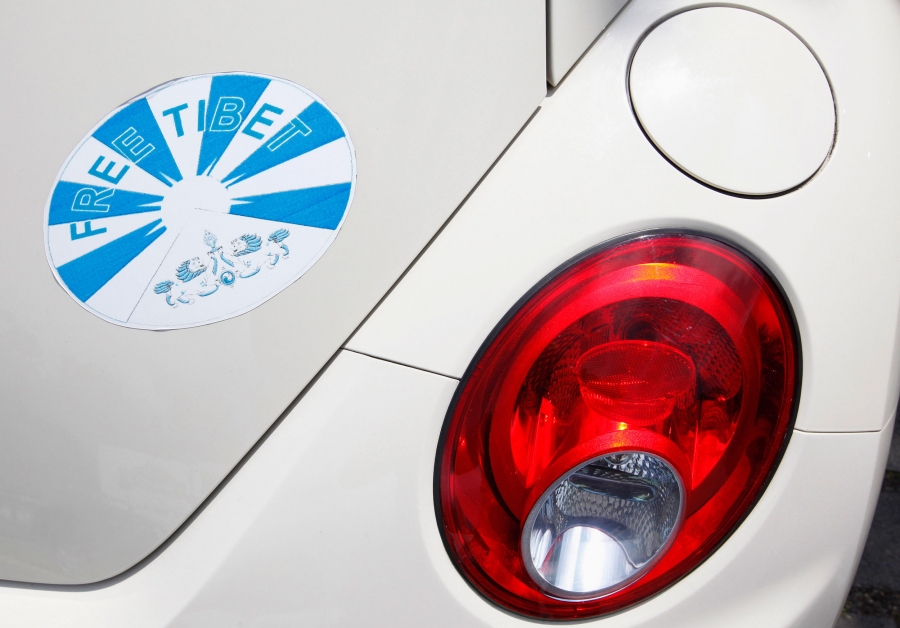 A "Free Tibet" sticker is seen on a Volkswagen Beetle car during a public talk by Tibetan spiritual leader the Dalai Lama in Frankfurt May 14, 2014.

Hollywood actors like Steven Seagal and Richard Gere support the movement. In 1994, the Beastie Boys sampled two Tibetan monks on their album, “Ill Communication,” and created a fund to disperse royalties to them. 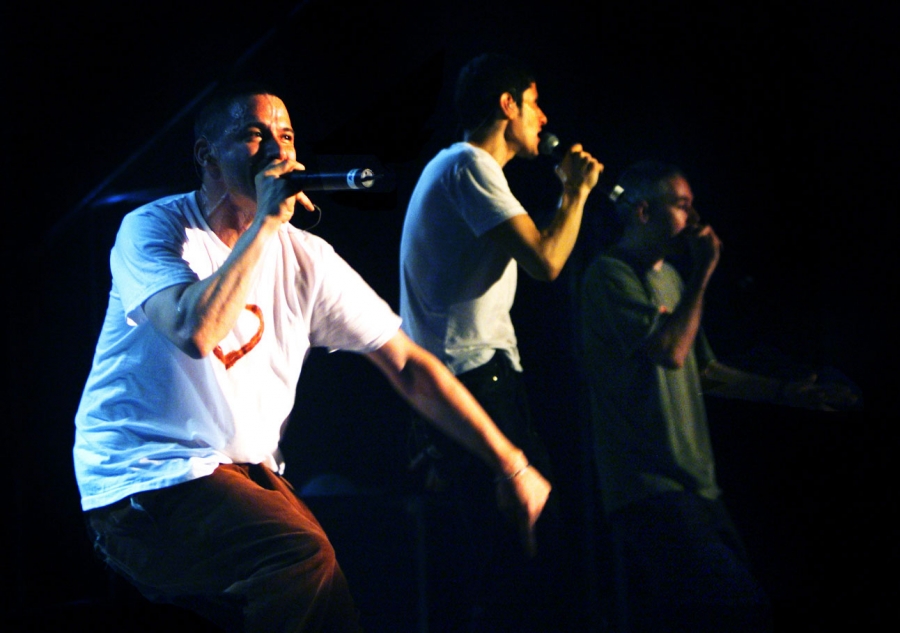 The first Tibetan Freedom Concert was held in San Francisco in 1996, and concerts were hosted for the next three years, and in 2001 and 2003.

“People outside didn't necessarily really know what was happening inside, but Tibetans inside were aware of this global support.”

“People outside didn't necessarily really know what was happening inside, but Tibetans inside were aware of this global support,” Tethong said. “The Dalai Lama has the Nobel Peace Prize. People in Hollywood and people in positions of power, in these foreign governments, speak up for us. They knew that. And so, it was — for all of us — an incredible morale boost, and it helped us to solidify a kind of Tibet support ... And so that movement gave rise to what we have now, which is Tibetan-led, active grassroots movement.” 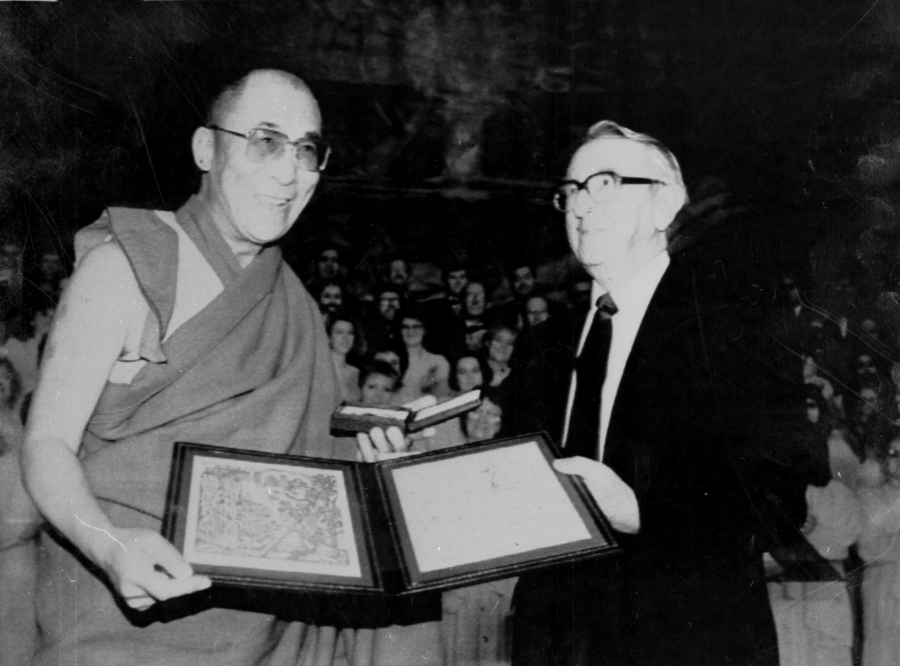 Other high-profile protests occurred in the lead-up to the 2008 Summer Olympics in Beijing. Tethong, then the executive director of Students for a Free Tibet, snuck into China and organized protests on the Great Wall and at Mount Everest. She said social media helped Tibetan protesters inside Tibet.

“Using their social media profiles, they were using it sort of everywhere and even making videos where they were saying — and it was very political, the statement, — ‘I am Tibetan, and I love Tibet,’” she said. “But it was creative in that it was harder for the Chinese government to crack down on them because in a way, what they were saying was not supposedly against the law or bad.” 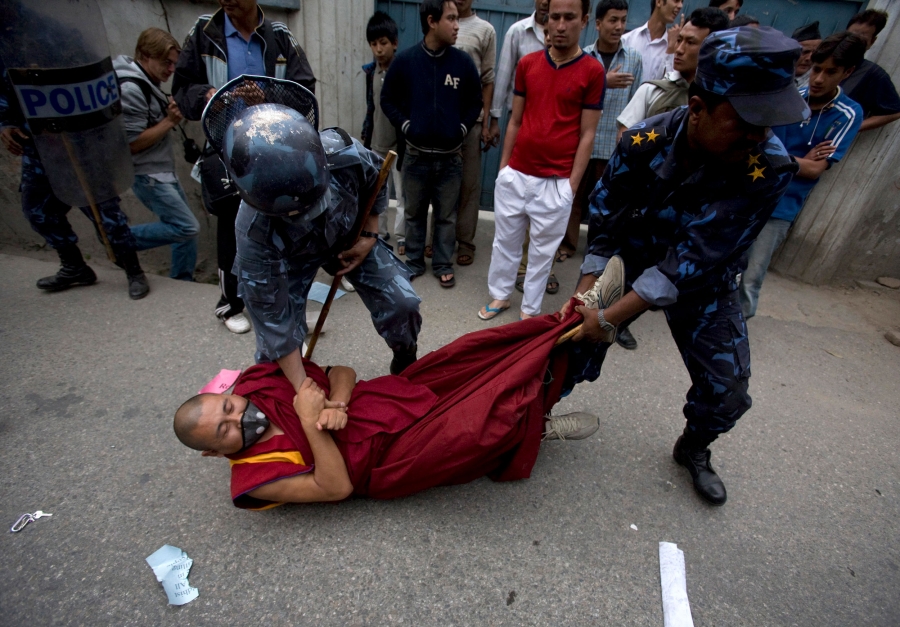 Riot police drag a Tibetan monk to a police vehicle after he was detained for protesting outside the Chinese embassy in Kathmandu on April 1, 2008. Dozens of Tibetan monks and activists were detained after shouting anti-China slogans and yelling "Free Tibet" in Kathmandu.

President Donald Trump signed the Reciprocal Access to Tibet Act in December 2018. The law instructs the state department to deny visas to Chinese officials who restrict Americans from traveling into Tibet.

Her position at the State Department has not been filled by the Trump administration.

“Increasingly, we see that countries that have typically spoken out on behalf of Tibet are now shying away from doing so.”

“Increasingly, we see that countries that have typically spoken out on behalf of Tibet are now shying away from doing so,” Sewall said. “Heads of state, leaders of parliament, are more reluctant to meet with His Holiness the Dalai Lama. This means that the symbolic act of visibly, for example, having the president or the secretary of state welcome His Holiness the Dalai Lama into official meeting rooms is really important diplomatic symbolism. That's absent right now.”

Sewall says the US has been silent recently on any issues relating to Tibet, except the passing of the Reciprocal Access law by Congress.

“Congress … has essentially provided that legislation to the Trump administration,” she said. “Many people had been working for some time on reciprocity because people can't travel to the Tibet Autonomous Region, whereas, the Chinese have enormous freedom within the United States, so the law's a good thing. It's just that it comes from Congress, not from the executive branch. And there are many things that the Congress cannot do. The Congress cannot make the president of the United States meet with His Holiness the Dalai Lama.” 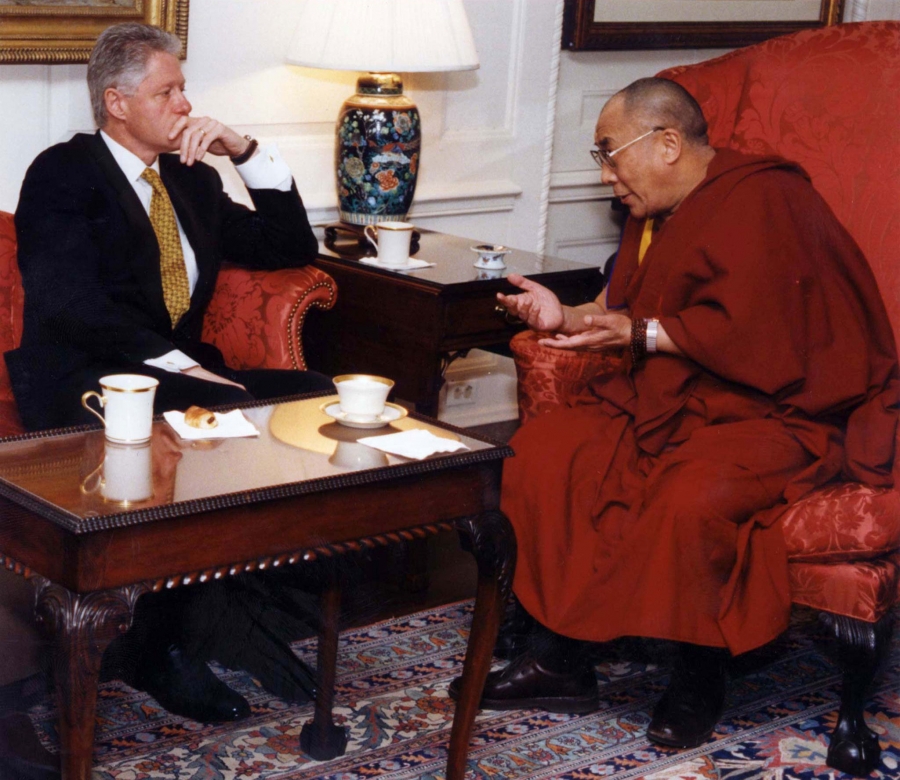 US President Bill Clinton meets the Dalai Lama at the White House on Nov. 10, 1998. Clinton saw the Buddhist leader in defiance of Beijing's wishes. President Donald Trump has not signaled whether he would meet with the Dalai Lama.

“At this point, we don't even have the moral leadership of pointing out the importance of this issue. We aren't engaging the Chinese in a public way on these issues.”

“But there's a huge difference between remaining silent and stating positions,” she said. “At this point, we don't even have the moral leadership of pointing out the importance of this issue. We aren't engaging the Chinese in a public way on these issues.” 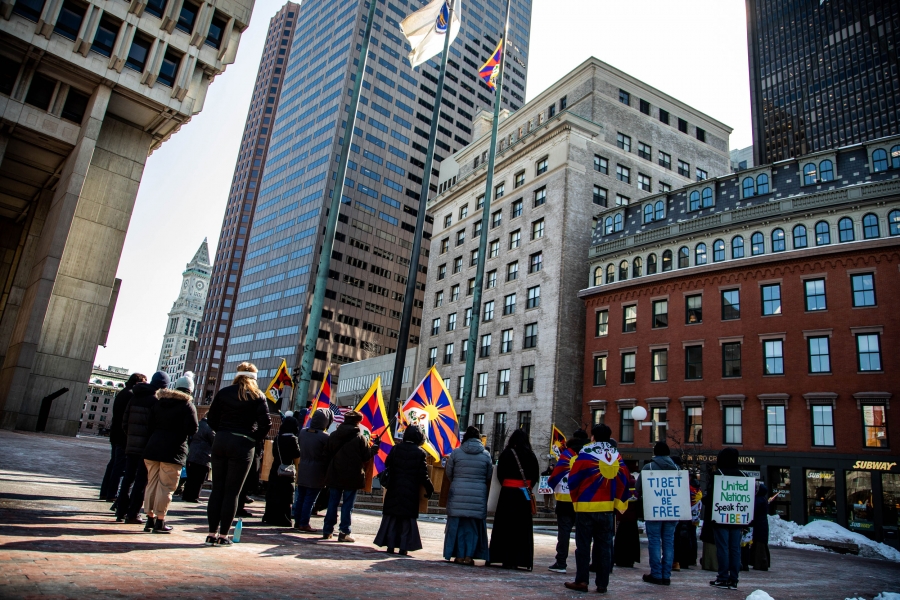 The group of activists watches the Tibetan flag fly in downtown Boston.

Back in Boston, Tethong is hopeful.

“If you think about the resources that the Chinese state has thrown at occupying Tibet and crushing Tibetan spirit, this issue should be over,” she said. “And it's not — far from it. I think that the resistance spirit that was in the streets in Lhasa in March 1959 still exists with an entirely new generation of Tibetans inside Tibet where protests and resistance continues to this day.” 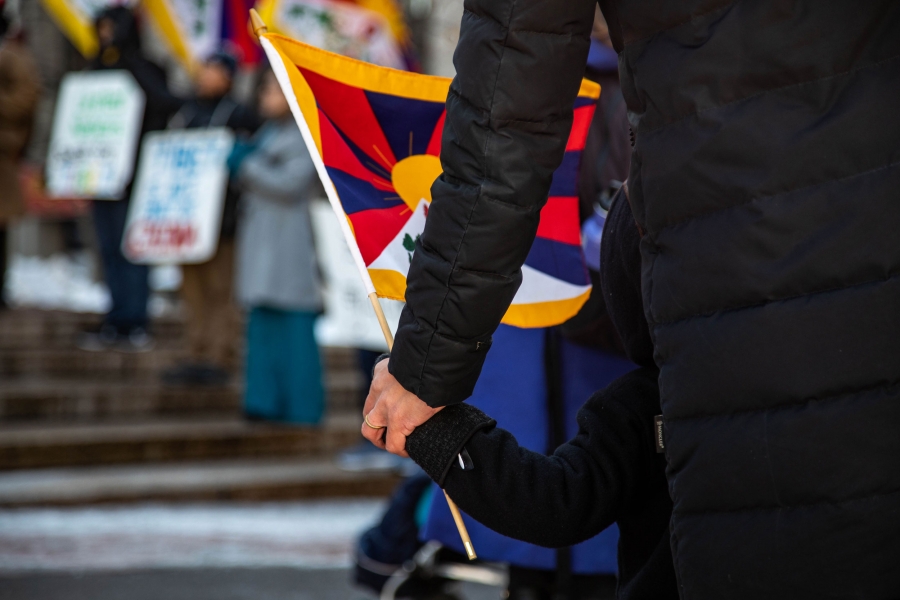 Lhadon Tethong holds her son's hand at the rally marking the 60th anniversary of the Tibetan uprising.