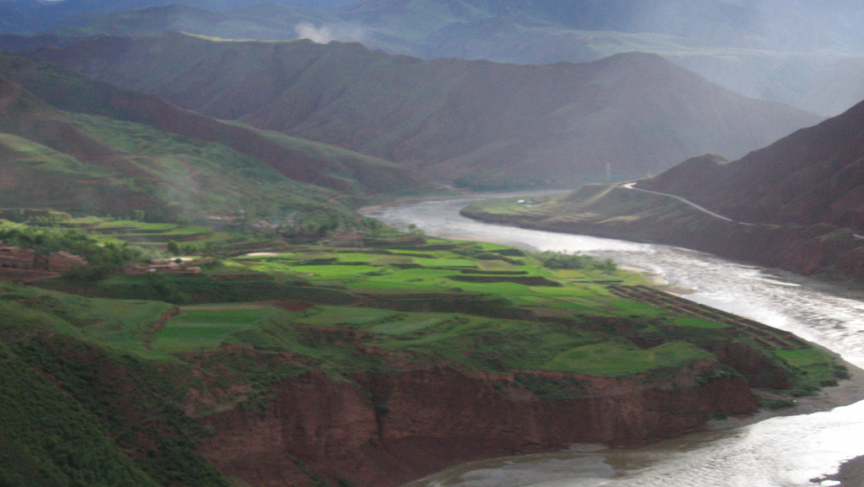 Melting glaciers on the Tibetan Plateau feed into many of the regions’ rivers, which China is damming for hydropower.
Credit:

From damming powerful rivers to tearing up savanna for mining to expelling Tibetan nomads from their ancestral lands, China is exploiting the natural resources of Tibet on an epic scale, a new book argues.

Only the Arctic and the Antarctic have more ice than the glacial highlands of the Tibetan Plateau, earning it the nickname "the third pole." These glaciers feed into rivers that provide water for more than a billion people in Asia. But to generate hydropower for its own population, China has begun damming those rivers.

Tibet has huge reserves of copper, lithium, gold and silver. Most of it has never been touched, because the Tibetans didn't mine the land: it's against their religious practices to disturb the ground. But China has begun mining on an enormous scale.

Back in the 1930s, the Tibetan Plateau was considered the "Africa" of Asia, because of its wide savannas, teeming with wildlife. Now, it’s nearly empty.

Travel writer Michael Buckley documents all of this in his new book, Meltdown in Tibet: China’s Reckless Destruction of Ecosystems of the Highlands of Tibet to the Deltas of Asia. He focuses primarily on the dangers China’s damming projects pose to some of the mightiest and most important river systems in the world.

China's been "gung-ho on dams ever since Mao Zedong came into power," Buckley explains, but not on the Tibetan Plateau — it was always in the East. Now the dam movement in China is expanding westward with no end in sight.

The headwaters of the Yangtze River, the Yellow River, the Brahmaputra, the Irrawaddy, the Ganges and the Mekong all flow from the high-altitude plateau into Asia, providing life-giving water for drinking, agriculture, fisheries and, more recently, hydropower.

“You've got the hugest hydro-potential ever,” Buckley says, “because you’re starting in the Himalayas and dropping 3,000 or 4,000 meters."

China wants to double its use of hydropower by 2020, as a way generating more “green” energy. The only way to do that is by expanding dam building to the rivers of Tibet, because the rivers of China are already thoroughly dammed, Buckley says. “You can't dam them anymore. China has more dams than the rest of the world put together. So they’re gradually working their way towards the Tibetan Plateau.”

China says they need the dams for industry and the military. But they are also essential for mining, which has taken off on a very large scale, Buckley says. “[Mining] used to be small operations, like gold miners, individuals, small groups — and then along came the railway, which is basically from Xining to Lhasa. ... That railway enables cheap labor to come in and it also enables exportation of minerals for the first time in Tibet's history,” Buckley says.

Using what Buckley calls outright land grabs, China has taken over swaths of Tibetan grasslands — land that has been grazed by Tibetan nomads for hundreds of years. “They've just ripped up any contracts that they've got with these people and told them, ‘Your 30-year lease is not worth anything now. Move along. Just go and get settled in the house over there,’” Buckley says.

To make the land grabs even easier, China has declared some areas national parks. “This is the worst form of ‘greenwashing’ you will ever come across,” Buckley says. “They declare a place to be a nature reserve and inform the Tibetan nomads, ‘You're in a nature reserve. You'll have to leave.’" After the native population moves out, he says, the government waits a bit and then suddenly along comes a mining company that tears up the very same land.

“The thing Tibetans really object to is when they start mining at sacred mountain sites,” Buckley says. “A lot of villages have their own sacred mountains, and if you disturb the spirits, it's very bad karma for them.”

The effect of all of this on wildlife has been nearly catastrophic. Back in 1980, a delegation from Tibet's Government-in-Exile visited and was shocked by the silence of the grasslands, Buckley says. “They did not hear the herds of animals that they would normally hear: the wild asses, the wild yaks, the thundering hooves — even the birds were missing. They started looking around more and they could not find any wildlife. It was gone. It was just decimated.”

The disappearance of the yaks is especially destructive to the local population. Buckley says this is partly by design. “Tibetan nomads get everything from the yaks. They use the yak dung as fuel; they use the yak hair to make tents. They don't really want to eat the yaks, though, because if they eat them, they lose them. So their objective is to milk them and get the butter and cheese.”

The Chinese, he says, “came up with this idea that you should make these yaks into meat we can actually eat. It’s very alien to Tibetans, this idea; they don't like this idea at all.”

In order to make re-settlement of the nomads a non-reversible process, the Chinese take away the yaks and send them to the slaughterhouse: If the nomads don't have yaks, they can't survive. “They become nobodies, like refugees in their own land,” Buckley says.

Protest within Tibet is futile, Buckley says. They are up against a military-industrial complex that is determined to squash it. “People are imprisoned. People disappear. There have been a number of demonstrations against mining where Tibetans have been killed. The only chance that you might have for stopping some of this damming is Chinese groups. They don't like those dams either, and they have mounted fierce protests in Szechuan and Yunnan, and they've had some successes.”

“I think the only chance of really stopping activity like this lies with Chinese NGOs and Chinese groups being very brave and managing to highlight the issues and to stop a few projects,” Buckley concludes.