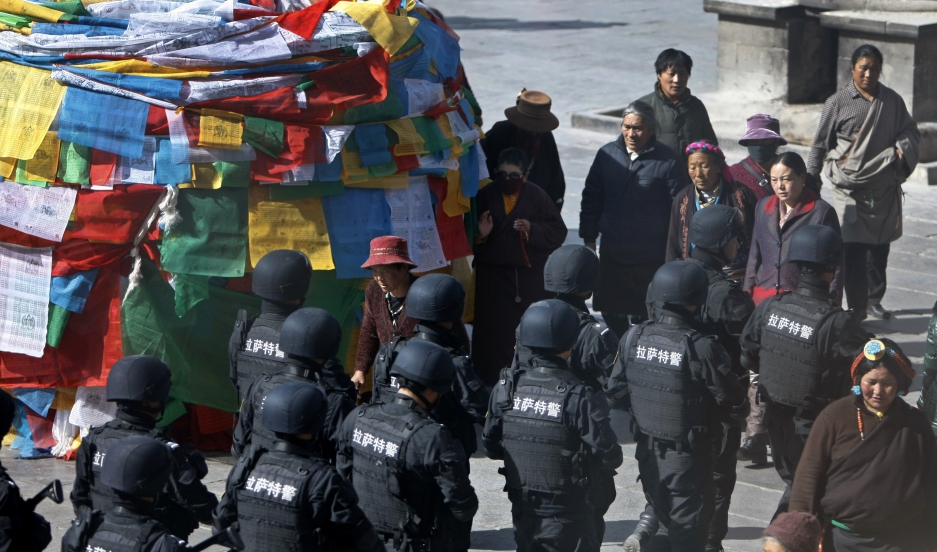 Chinese police patrolled outside Johkhang Monastery in the capital of the Tibet Autonomous Region of China in March 2014. Security forces always go on high alert around the sensitive March 10th anniversary.

These are treacherous days for anyone in China who dares to publicly criticize government policy, especially when it comes to Beijing’s handling the troubled ethnic minority regions of Tibet.

A Tibetan blogger named Druklo is one of the latest people to find that out the hard way. Druklo was arrested by Chinese police in a part of Qinghai province that Tibetans call Rebkong, according to a Tibetan friend who now lives in exile. The friend asked to remain anonymous out of concern that making their friendship public might put Druklo at greater risk.

The day before his arrest in March, Druklo and his brother-in-law traveled to Rebkong on business, the source said. Police arrested them at their hotel the next morning. Officials released the brother-in-law after several days. But Druklo, who is better known by his pen name of Shokjang, remains in custody.

“Shokjang is someone who is all the time prepared to be arrested, and he knew that the danger of being arrested was there all the time," said the detainee’s friend.

The arrest of Druklo is part of a broader crackdown on freedom of expression in Tibet, according to human-rights groups. John Gaudette, of the Tibetan Center for Human Rights and Democracy, says Tibetan writers who work to preserve a unique Tibetan cultural identity have come under increasing pressure from Chinese authorities.

“In particular, in Tibet, artists are serving a role of preserving and adapting Tibetan culture,” Gaudette said. “And that’s something there have been substantial crackdowns on.”

In the days leading up to his arrest, Druklo wrote a blog post about the deployment of security forces in the Rebkong area. The anniversary of the March 10 uprising against Chinese rule in 1959 is always a sensitive time for government authorities, and China often boosts security measures in Tibetan areas during that time.

Authorities had detained Druklo before. In 2010, police arrested him alongside fellow writer Tashi Rabten. They were released one month later.

Friends of Druklo, along with human-rights groups, have expressed concern for his safety while in detention. Torture methods like stress positions, beatings, sleep deprivation and starvation are well-documented in Tibetan prisons. Torture is especially common during initial detention before trial, according to Gaudette.

“My guess is that, depending on evidence they have, which probably is fairly minor, he’s probably being subjected to severe torture now, and then that'll change into a starvation diet,” Gaudette said of Druklo’s case.

The Chinese Embassy in Washington, D.C. did not respond to a request for comment.

The crackdown on writers and journalists is not limited to Tibet. President Xi Jinping has tightened press freedoms across China, according to Bob Dietz at the Committee to Protect Journalists. Not long after President Xi took office in Jan. 2013, a Communist Party communiqué called on the media to be “of one heart and mind with the Party.”

“We’ve seen periods of loosening and tightening in Chinese media policies,” Dietz said. “Right now, it’s in a period of intense tightening — not just for Tibetans, but for all Chinese.”

The situation in Tibet remains especially tense and writers including Druklo appear to be a target. While Druklo’s exiled friend said he worries about the writer’s safety, he also praised Druklo’s courage and resolve.

“It was a condition that he accepted, that he will go to prison,” Druklo’s friend explained, “because he said simply, 'There is no choice for us Tibetans.'”