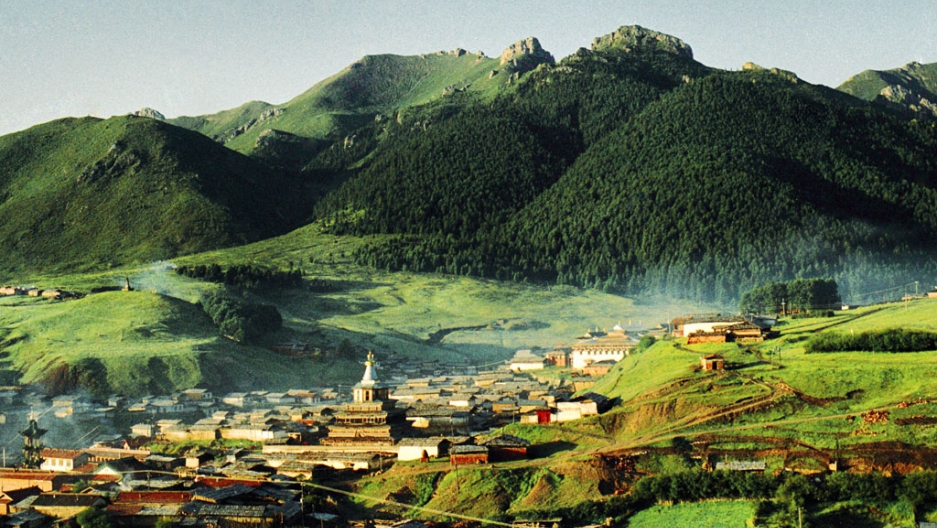 BIHAR, India — There is only one road to Kirti monastery, and it is rough.

Snow peaks tower to the north and west of the sprawling complex in eastern Tibet. Nomads who visit the chapels to pray let their yaks graze on the grasslands rolling in every direction.

Kirti, located in the region of Ngaba, which the Chinese refer to as Aba, is a spiritual hub and a center for Buddhist scholarship. Since the 15th century, its pagoda-like temples and elaborate shrines, libraries and debate halls, paintings and sculptures of Buddhist masters, have called to monks across Tibet.

In recent months, however, Kirti has become known for something else entirely.

Since March, eight monks from Kirti have self-immolated in protest of China's grip on their homeland. Another monk and a nun from the neighboring prefecture, Kandze (Chinese: Ganzi) have also set themselves on fire. On Thursday, reports emerged of yet another nun burning herself alive in the Tawu area between Ngaba and Kandze.

More: Tibetan nun burns herself to death in Tibet

Palden Choetso (also known as Choesang), a 35-year-old Buddhist nun, is reported to have succumbed to burn injuries after calling for freedom in Tibet and setting herself on fire. She is the 11th Tibetan to have done so since March this year. Four monks and two have nuns died; the others are in police custody.

When they self-immolate, these young Tibetans — mostly between the ages of 18 and 25 — shout things like ''Freedom in Tibet,'' ''We want human rights," and ''Return of the Dalai Lama in Tibet.''

While their message is clear, pressing questions remain: What motivates a nun to soak her robes with petrol and then set herself on fire? Why would a monk drink gasoline, then walk to his village square and set himself aflame with a cigarette lighter?

Do these Tibetans believe their sacrifice will be like that of the Tunisian fruit-seller Mohamed Bouazizi who self-immolated in December of 2010? Nobody could have predicted Bouazizi’s action would spark the Arab Spring.

Self-immolation as a tool for Tibetans’ political expression is new. Before 2009, there was no known occurrence of such type of protest inside Tibet.

To understand these acts of self-immolation, one must consider the decades of repression Tibetans have endured.

More: What does a trend of self-immolations tell us?

A few years ago, while researching a book on Tibetan Buddhism, I stayed at a truck-stop hotel near the Kirti monastery. One morning, a plain-clothes cop barged into my dank room and took me to the police station for six hours of questioning.

Ultimately, I was released and rather unceremoniously put on the next bus towards Chengdu, a 12-hour journey south.

A Tibetan nun takes a break in the sun from a three hour "Puja" or prayer meditation session at the Keydong Thuk-Che Choling Monastery in May 19, 2003 in Kathmandu, Nepal. (Paula Bronstein/Getty Images)

I was not mistreated, only exhausted, which does not compare to the intimidation, fear and violence that Tibetans endure daily under China’s rule.

The climate near Kirti was repressive then. It's worse now.

Today, Ngaba and Kandze, which both lie in China's Sichuan province, are under full lockdown. Riot gear-clad soldiers, armored tanks and patrols with mounted weapons make their rounds throughout day and night. They carry fire extinguishers.

Watchtowers and fortified roadblocks have been installed, and the movement of all Tibetans is strictly monitored.

During dozens of trips to Tibet and China, I have spoken with scores of monks and nuns. Each spoke passionately of his or her deepest aspiration: that the Dalai Lama, Tibet’s exiled spiritual leader, be reunited with his brethren. Each had experienced political indoctrination or had been tortured for refusing to participate.

Chinese officials vilify the Dalai Lama. They say he wants an independent Tibet, even though since 1988, the Dalai Lama has publicly stated that he seeks genuine autonomy for Tibetans within the People's Republic of China.

The Dalai Lama has been said to have "the face of a man and the heart of a beast" and is "a wolf in monk's robes." These are the words of a government spokesperson in Beijing and the most senior official of the Tibet Autonomous Region, respectively.

China's Foreign Ministry has recently condemned the self-immolations and accused the Dalai Lama and Tibet support groups of encouraging them. Ministry spokeswoman Jiang Yu has called such alleged support "violence and terrorism in disguise."

Displaying the Dalai Lama's photograph, praying for his long life, wearing an amulet with his image or having his voice chanting mantras on a mobile ringtone are all considered criminal acts in China.

“The Dalai Lama is the heart of our nation,” a Tibetan nun in Kandze once told me, quietly revealing a photograph of him she had kept hidden.

One nun said she had spent years in prison for demonstrating in Lhasa. For refusing to denounce the Dalai Lama, she said, she and her fellow nuns had electrical wires attached to their tongues and were shocked repeatedly. Then, they were hung from the ceiling upside down, their hands and feet bound together behind their backs, and beaten.

A farmer who had just been released from prison told me how he spent five years incarcerated for yelling in a public square for the return of the Dalai Lama to Tibet. Within minutes, plain-clothed policemen tackled him and threw him into a van. He was convicted of sedition.

He was released on “medical parole” after his body could no longer endure the torture he had received as police tried to extract a confession from him. Shocks from electrical batons and beatings with heavy, sand-filled rubber tubing do not leave external scars, but they destroy prisoners’ internal organs.

“The [electrical] shocks felt like a fire in my chest. They told me to admit the Dalai had ordered me to demonstrate in the streets — and then shocked me, over and over,” the farmer said. "I was told to admit my crimes of trying to split Tibet from China, and that I was supported by the Dalai Lama."

"I am a simple person," he said. "I have only ever seen photographs of the Dalai Lama. I want to see the Dalai Lama in my country, Tibet — that was all I was yelling for that day in the streets.”

The farmer and the nun were as determined as any two people I have ever met. This is what the Chinese government fears — the power that comes from this resolve for freedom. And, it is this fear that causes the Chinese state to shove electrical cattle prods into the mouths of those who call for the Dalai Lama’s return.

The Dalai Lama said recently while traveling in Japan that the incidents of self-immolation are "a sign of deep desperation; Chinese leaders need to look into these incidents more seriously. Ruthlessness only will not be good for all."

China must realize that it will be unable to change Tibetans’ hearts and minds, that its response to dissent has created more dissent, as well as what they fear most: instability.

Tibetans continue to post pamphlets around Kirti monastery and in the main market of Ngaba stating that if the government crackdown continues “many more people were prepared to give up their lives.”

They are no longer waiting for Tibetan leaders in exile to negotiate with the Chinese Communist cadre. They have seen that decade-long finger pointing hasn’t changed anything on the ground.

Knowing that such torture is in store for them in Chinese prisons, and that they cannot depend upon any judicial process, some Tibetans are now choosing to burn themselves alive.

Matteo Pistono is the author of "In the Shadow of the Buddha: Secret Journeys, Sacred Histories, and Spiritual Discovery in Tibet" and founder of Nekorpa, an organization that works to preserve the pilgrimage experience. Pistono’s work has appeared in The Washington Post, BBC's In-Pictures, Men's Journal, Kyoto Journal and HIMAL South Asia.