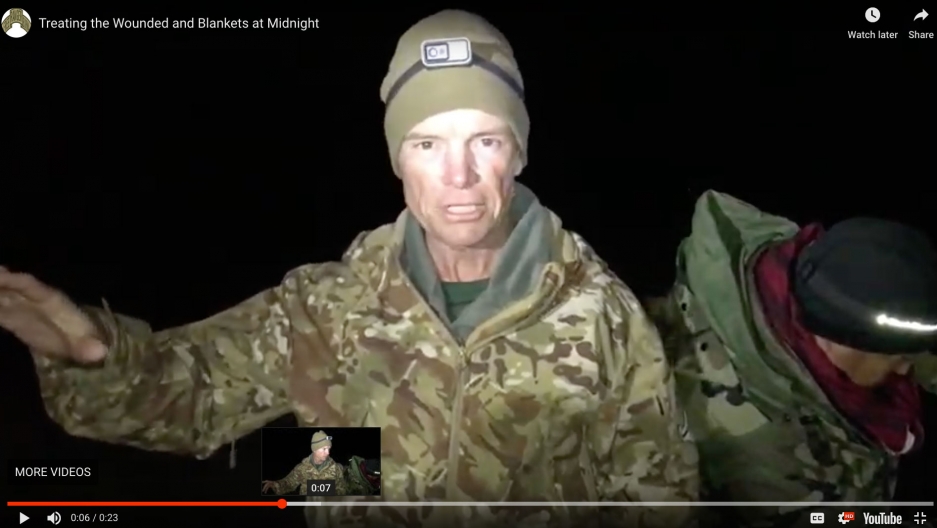 In a recent YouTube video created by the Burma Free Rangers, David Eubank explains to viewers the scene and how the Rangers are treating wounded civilians in Eastern Syria.

ISIS fighters are defending the tiny patch of desert they still hold in eastern Syria.

And now some of the women and children who travel with ISIS, as well as some of the ISIS fighters themselves, are surrendering.

A few humanitarian aid groups are on hand to meet the civilians and fighters as they turn themselves in.

One of those is David Eubank, a former US Special Forces operative who heads the Free Burma Rangers relief group. Eubank spoke with The World in 2017 from Mosul, Iraq.

Now, he's in eastern Syria near the Iraq border, helping those fleeing ISIS as the group defends what little ground it still holds. He described the scene to host Marco Werman.

David Eubank: Every day, hundreds of people run away. All day long, the shelling as the coalition and the Syrian Democratic Forces try to defeat what's left of ISIS in this pocket. And as that shelling happens, people break away and flee — many of whom get shot by ISIS as they try to flee. We treat those wounded. They all come different ways. They end up mostly on foot, although a few have driven vehicles to our lines, and they come out bewildered, terrified, many — especially the kids — they don't know anything. They're wide-eyed, like what in the world is going on? One Canadian ISIS girl said — when my daughter gave her some food — she said, "Is it OK to take this? We were told we'd be tortured and killed by the enemy, you all."

Marco Werman: So, that girl who was leery about taking any food assistance from you, she was recruited by ISIS — and she came from Canada to fight in Syria?

She came from Canada to join the caliphate not as a fighter, but as a wife. Two Canadian girls — one Canadian girl went to join her husband who'd already joined ISIS. (He told her to come, and she went.) And the other one just went because she just liked the idea and got there, and it didn't turn out so well. I would say, out of 300 people that flee, about 30 or 40 are men and they're obviously ISIS soldiers, with the beard style and the tough hands, and fit. Today, we saw blond Ukrainians coming out, all kinds of people.

You are former special forces. Is any of this surprising to you?

I saw ISIS multiple times. One time, two yards away; that's very close, eye to eye. You know, I was wounded four times in the Battle of Mosul. They killed my translator; 30 of my close Iraqi friends were killed. I saw many children killed by ISIS. They never surrendered. And now, to see them surrendering, it moved me to tears.

You're there in eastern Syria with your family, your wife, your 12-year-old son and two teenage daughters. Why take this risk with your kids?

My kids do feel this is the right place for them, to give love to people in need. And my kids are not right at the front line. They're not in direct danger. And then when the ISIS families see America's not just soldiers and might and power, but American families who love each other — and I believe that's the antidote — that's love.