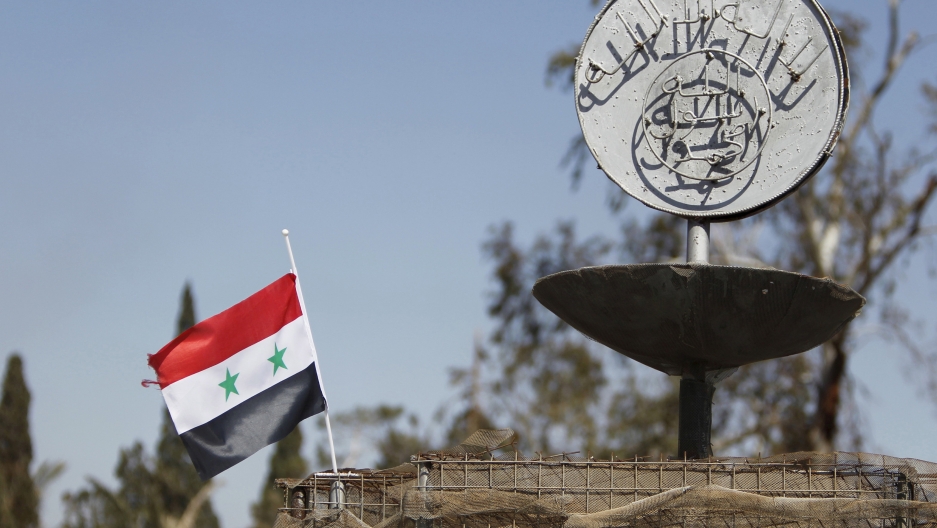 A Syrian national flag flutters next to ISIS's slogan at a roundabout where executions were carried out by ISIS militants in the city of Palmyra, in Homs Governorate, Syria, April 1, 2016.

When President Donald Trump announced last month that the US would conduct a “full and rapid withdrawal” of its forces from Syria, four weeks of confusion ensued in Washington as both anti-ISIS partner nations and Trump’s own administration scrambled to make sense of the decision.

Today, Vice President Mike Pence confirmed Trump’s declaration of an ISIS defeat, just hours after the militant group claimed responsibility for an explosive attack in Manbij near a vegetable market on Jan. 16 that killed US troops.

"The caliphate has crumbled, and ISIS has been defeated," said Pence to a roomful of ambassadors on Jan. 16.

While a withdrawal has begun, US National Security Adviser John Bolton has said that a full pullout will be conditional on “guaranteeing the safety” of Kurdish forces, whom the US has backed, in northeast Syria.

Trump himself has contradicted his initial tweet stating that the US had “defeated ISIS in Syria,” referencing on Jan.  14 the group’s “little remaining ... territorial caliphate” while sending other mixed signals to regional actors, including Turkey.

Amid this chaos, the course of events in Syria itself, as well as how key international players such as Russia and Turkey will react, remains unclear. But analysts agree that a pullout will prove harmful to US interests in Syria and Iraq, leading to further instability and a potential resurgence of ISIS.

One certain loser appears to be the People’s Protection Units (YPG), the Kurdish-dominated group that has served as the ground force for the US-led coalition’s war on ISIS in Syria.

Jennifer Cafarella, director of intelligence planning at the Washington, DC-based Institute for the Study of War, affirmed this view. “The biggest variable remains what military operation Turkey launches [against the Kurds] after the withdrawal of US forces,” she said in remarks to The World. “Near-term scenarios include an expanding YPG/PKK [the YPG’s Turkey-based sister organization] war in which the YPG/PKK cuts a deal with [Syrian President Bashar al-Assad] in return for military support against Turkey.”

The YPG has repeatedly reached out to the Assad regime in recent weeks, inviting government forces to take positions outside the city of Manbij, a likely Turkish target.

The Kurdish search for allies has also brought them to another US foe: Russia.

Speaking to The World, Aaron Stein, director of the Middle East program at the Foreign Policy Research Institute, stated that Russia would seek “to fill the vacuum” in the event of a US pullout.

This could occur “through a Turkish buffer zone … [with] some movement of regime forces closer to the border.” Stein also proposed that Moscow may seek to “block the Turks out, using the threat of an invasion to force the Kurds to cut a deal with the regime, resulting in some sort of Russian-regime patrols on the border.”

Some level of Russian-Kurdish cooperation is already underway, with Russian military police conducting patrols outside Manbij on Jan. 7.

While the abrupt US withdrawal announcement itself may have been unexpected, experts affirmed that the policy does not represent a sea change for Trump.

In Cafarella’s view, the move was long coming. She argues that “the actual turning point came shortly after he [Trump] was elected,” with only the timing of the move proving surprising. “He seems to have made a decision early on to allow the territorial campaign against ISIS to conclude but to go no farther in Syria. I don't think his decision to withdraw was that surprising strategically,” she said.

Other sources put it more bluntly. “The president does not want to be in Syria,” said a senior Washington, DC-based analyst, speaking on condition of anonymity. “Important interests within the government want to keep us in Syria and are trying their best to secure their respective agendas. They will succeed in postponing the withdrawal somewhat but I am quite sure that by the end of this year at the latest there will be no more official US military presence in Syria."

One outcome seems certain: an increased risk of conflict in Syria.

“By withdrawing in Syria, the US is not just leaving before finishing the job against ISIS, it is leaving behind new conflicts created by the campaign it launched against the group,” said Hassan Hassan, co-author of “ISIS: Inside the Army of Terror.”

“Exiting without a strategy is not a prudent exit strategy. The move threatens to unravel the Syrian conflict and ease the return of violence, and not just in areas where the US operated.”

The potential for interstate conflict to further play out across the country is a particular source of concern. “Long term, the region will remain engulfed in conflict as ISIS resurges, al-Qaeda expands, and the Israelis likely escalate their kinetic operations in Syria in response to Iran's continued [buildup],” said Cafarella.

Israel has conducted hundreds of airstrikes in Syria over the course of the nearly eight-year conflict, with over 200 of those coming between March 2017 and September 2018 alone.

Whatever the result in the region, the chaos within the Trump administration over its Syria approach is unlikely to subside. “This is clearly an unusual level of dysfunction in the interagency process,” said the senior Washington analyst who asked to remain anonymous, referring to the conflicting statements emerging from Trump, Bolton and US Secretary of State Mike Pompeo.

“Different people in the government insist on different things … the buck does not really stop anywhere. [There is] a widespread intent to evade the president’s deeply isolationist tendencies. The result is what you see.”