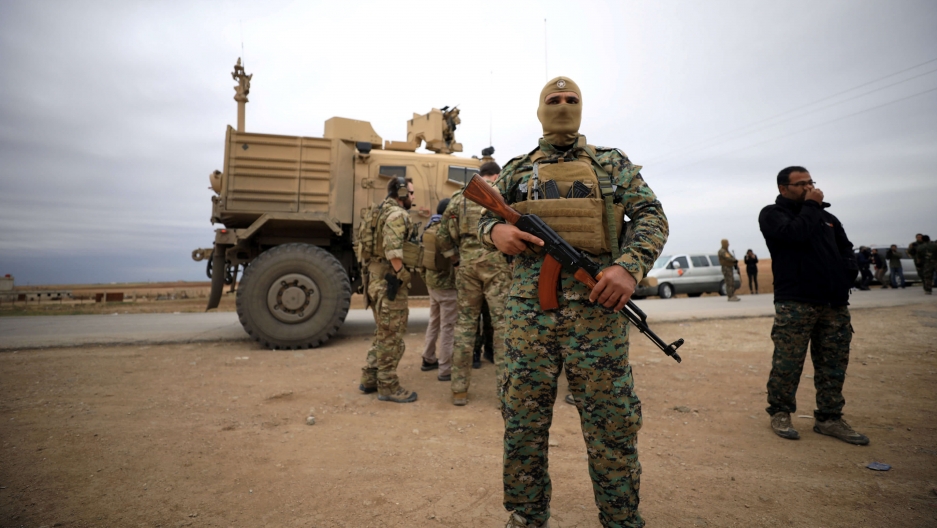 Syrian Democratic Forces and US troops are seen during a patrol near the Turkish border in Hasakah, Syria Nov. 4, 2018.

At the end of 2018, President Donald Trump boldly announced that the US had defeated ISIS in Syria and that he planned to pull back all 2,000 American troops stationed in the country.

“Our boys, our young women, our men, they’re all coming back and they’re coming back now. We won,” he said in a video message on Twitter.

If anybody but Donald Trump did what I did in Syria, which was an ISIS loaded mess when I became President, they would be a national hero. ISIS is mostly gone, we’re slowly sending our troops back home to be with their families, while at the same time fighting ISIS remnants......

The decision shocked policymakers and US allies alike and resulted in Defense Secretary Jim Mattis resigning.

Since then, there have been contradictory statements from administration officials at the highest level. Secretary of State Mike Pompeo said the fight against ISIS actually continues and that America won't stop until ISIS is defeated and Iran is driven out of Syria.

“This isn’t a change of mission. We remain committed to the complete dismantling of the ISIS threat and the ongoing fight against radical Islamism in all of its forms,” Pompeo said during his speech at The American University last week in Cairo.

So, has ISIS really been defeated?

According to Mia Bloom, a professor at Georgia State University who’s written several books on terrorism and violent extremism, ISIS has lost about 98 percent of the territory it held in 2014 and 2015.

Most recently, the US was able to capture Hajin, the largest urban area controlled by ISIS, on the Euphrates. ISIS responded by claiming the December 2018 Strasbourg Christmas market shooting.

“So, while ISIS might be defeated in the region, this has inadvertently created incentives for ISIS to flex its muscles in other parts of the world,” Bloom said. “And at the same time, about 6,000 or 7,000 of those ISIS fighters that were in Syria have moved to other places in the region. So it just shifted the focus of potential problems.”

The Trump administration has been sure to say that although they’d be pulling out troops, the fight against ISIS continues. However, on Sunday, President Trump threatened to "devastate Turkey economically" if it attacked US-allied Kurdish militia in Syria. And that could jeopardize stability in the region.

Starting the long overdue pullout from Syria while hitting the little remaining ISIS territorial caliphate hard, and from many directions. Will attack again from existing nearby base if it reforms. Will devastate Turkey economically if they hit Kurds. Create 20 mile safe zone....

Bloom said that the presence of US troops in Syria have staved off attacks from Turkey against the Kurds. And the Kurds have been the US’s most reliable allies against ISIS in the region.

Beyond the political skirmish, Colin Clark from the security consulting firm The Soufan Group questions whether or not Turkey, without the participation of the US, can handle fighting against the Kurds or fighting against ISIS.

“It's also a matter of capability," Clark said: Even the highly-regarded Turkish military may not be able to fight a two-front war.

'The richest terrorist group in the world'

At one point, ISIS was considered the richest terrorist group in the world. The exact wealth of the terrorist group is difficult to pinpoint, but analysts say they could have had anywhere from $400 million to $1 billion.

But Clark from The Soufan Group said we’re looking at the wrong number.

“We don't focus enough on the groups’ debits," Clark explained. "So, even while the group [ISIS] is under siege … [and] has lost approximately 99 percent of its territory, what that means to me is that it's got less money that it needs to spend on infrastructure and on governance."

Clark said that means ISIS has more capital than any insurgent group would need and more than enough capital to wage a low-level insurgency in parts of Syria and Iraq for the better part of the next decade. In fact, al-Qaeda was able to stage 9/11 for less than half a million dollars.

Bloom points out that many of the attacks abroad are not particularly expensive to accomplish.

“It really doesn't take a lot of money to ram a truck into a group of people,” she said.

Both Bloom and Clark believe that the greatest danger ISIS presents  — regardless of what their finances are in the future — is that people are going to be inspired to do something horrible in the name of ISIS.

“Scraping together a few thousand dollars, especially if you're not worried about ruining your credit, is not very difficult to do,” said Clark.