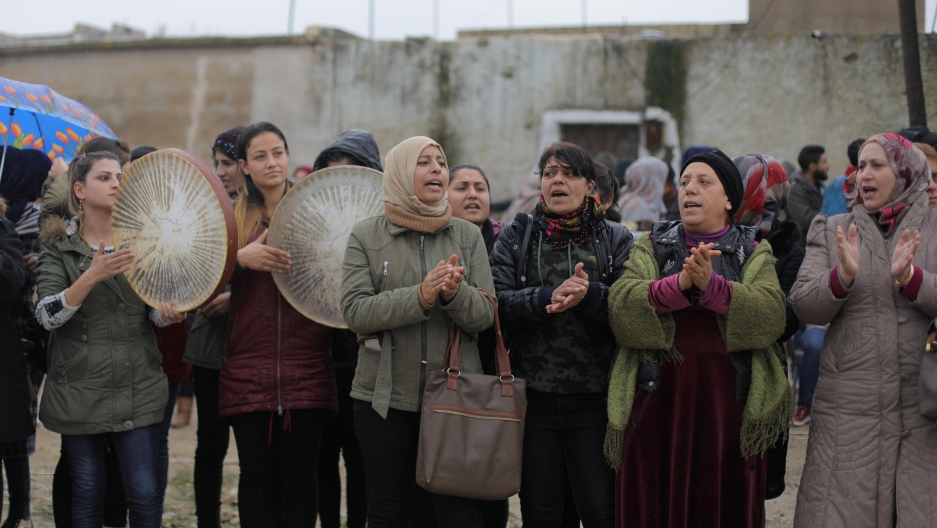 Women chant slogans during a protest near the Syrian-Turkish border in Ras al-Ayn town, Syria Dec. 20, 2018. US President Donald Trump on Thursday issued a surprise decision to declare victory over Islamic State militants in Syria and completely withdraw US troops from the country.

Kurds, among the biggest winners of Syria's war, stand to lose most from a US decision to withdraw forces who have helped them battle ISIS militants and deter their adversaries Ankara and Damascus.

With US help, the Kurdish-led Syrian Democratic Forces have captured large parts of northern and eastern Syria from ISIS, but warn that the jihadists still pose a threat even if President Donald Trump has declared their defeat.

Related: Kurds have a long list of reasons for seeking independence

"It's some kind of abandonment," said Ayub Nuri, Canadian Kurdish journalist and author of "Being Kurdish in a Hostile World." "The presence of US troops in Syria has deterred the Islamic State, deterred Turkey. It has deterred Russian and regime forces from approaching the only areas that are safe. So, of course, many people see it as a betrayal."

Not only will Trump's decision expose SDF territory to the risk of an ISIS resurgence, but it increases the possibility of an assault on Kurdish-dominated northern Syria by Turkey and its Syrian rebel proxies.

"Instability in one of the most instable places on Earth is not good," said Jan Egeland, head of the Norwegian Refugee Council. "We're not asking any country to militarily engage in Syria. But when one party is withdrawing it could easily lead to more conflict elsewhere. Others move in to take away a power vacuum; would it mean more war in the north between Turkey and Kurds? We don't know." 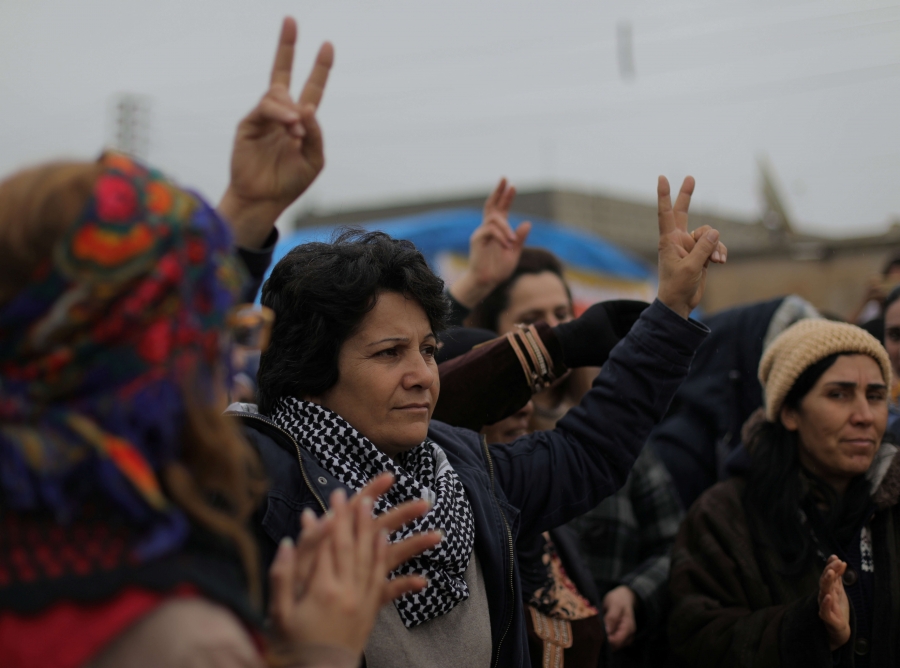 A woman gestures during a protest near the Syrian-Turkish border in Ras al-Ayn town, Syria Dec. 20, 2018.

It's shaping up to be a case of déjà vu for the Kurds, a stateless minority divided between Syria, Iraq, Iran and Turkey whose national aspirations have historically been thwarted by foreign powers. The Kurds are the largest ethnic group left stateless following the Ottoman Empire's collapse a century ago.

"Iraqi Kurds are kind of used to it because it was exactly a year ago that the US abandoned Iraqi Kurds when Iraqi troops invaded the Kurdish region," said Nuri. "So, for Iraqi Kurds, it's not new. For Syrian Kurds, I think it's a surprise or a shock."

To protect themselves from Turkey, some analysts say, Syrian Kurdish groups may now beat a path to Damascus to make a deal with President Bashar al-Assad and his Russian allies who could shield them in exchange for the surrender of their autonomy.

Unlike Syria's rebels, the SDF and the Kurdish YPG militia that leads it have never fought to topple Assad. At times, they have even cooperated against common insurgent foes, and earlier this year political talks were held in Damascus.

These, however, got nowhere: Assad opposes the Kurdish vision of a federal Syria that preserves their regional autonomy.

Seen as the most likely winners from a US withdrawal, Assad and his Iranian and Russian allies are already eyeing the recovery of SDF territory that spans roughly one-quarter of Syria and is rich in farmland, oil and water.

"The Syrian government must certainly take the area after the [US] withdrawal," an official in the Iranian-backed regional alliance that supports Assad told Reuters.

In the Kurdish regions of northern Syria, Trump's move has deepened fears of an attack by Turkey, which views Kurdish control of the north as a menace to its security and has demanded an end to US support for the SDF.

"This withdrawal is a green light to Turkey to go into the Kurdish areas and crush the Kurdish autonomous region or fight the Kurds. That's the main fear," said Nuri.

Trump's decision stunned the SDF, even though it had been wary of what it saw as shaky US policy toward Syria, said Ahmad Sleiman, a Kurdish politician and commentator.

"Relying on the Americans is always a failed experience, at the very least for Kurds," he told Reuters. "Now the Kurds' choices have become much tougher."

US support for the Syrian Kurdish YPG militia, the backbone of the SDF, evolved from 2014 when ISIS was at its zenith and the Kurds were battling to prevent ISIS from capturing the town of Kobani at the Turkish border.

The relationship enraged neighboring Turkey, which views the YPG as an extension of the Kurdistan Workers' Party (PKK), which has waged a 34-year-old insurgency in Turkey's mainly Kurdish southeast.

Ties expanded as YPG fighters rolled back ISIS with air and special forces support from the US-led coalition. ISIS has now lost most of its territory in Syria.

But at least 5,000 jihadists are still battling hard in their last enclave east of the Euphrates River near the Iraqi border, SDF commander-in-chief Mazloum Kobani told Reuters last week.

These include hardened foreign combatants and possibly even the group's leader, Abu Bakr al-Baghdadi, Kobani said. ISIS also has a pocket of desert territory west of the Euphrates in areas otherwise held by Damascus and its allies. 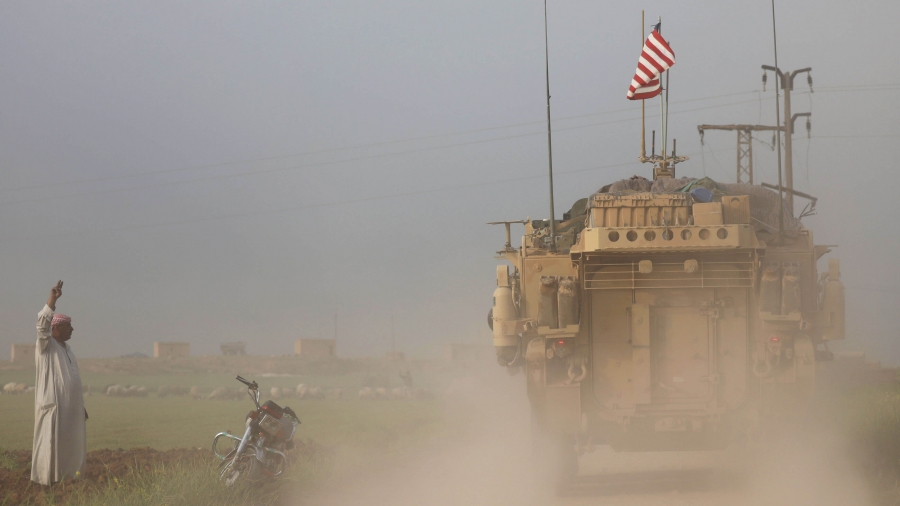 A man gestures at US military vehicles driving in the town of Darbasiya next to the Turkish border, Syria April 28, 2017. President Donald Trump on Thursday issued a surprise decision to declare victory over Islamic State militants in Syria and completely withdraw US troops from the country.

Nawaf Khalil, a German-based analyst of Kurdish affairs with SDF ties, flagged the risk posed by the many former ISIS members who had melted back into civilian life.

"Within months they can rejoin Daesh [Islamic State], maybe under another name," he told Reuters, also noting the hundreds of foreign jihadists in SDF detention whose governments refuse to repatriate. "There is real, serious danger. Thousands of people joined Daesh. They did not evaporate," he said.

Turkish attacks in Syria this year have led the SDF to temporarily halt operations against ISIS. Now, Turkey is threatening to mount a major attack into the northeastern area targeting the YPG.

"The operation east of the Euphrates will start soon, God willing," Abu Hatem Shaqra, head of the Turkey-backed Ahrar al-Sharkia Syrian rebel group, which is set to take part, told Reuters. Praising Trump's decision, he added, "Our aim is to take all the SDF-held areas."

Much now depends on how the United States manages the withdrawal of the 2,000 troops.

"If the Americans pull out fast, it will be chaos. If the Turks come in [...] it will be terrible blood-letting," said Joshua Landis, an expert on Syria and head of the Center for Middle East Studies at the University of Oklahoma.

The natural resources in the Kurdish area would represent potentially strong bargaining chips in a negotiation with Damascus, but the US declaration has undermined the Kurdish negotiating position.

"It's not clear who wins yet, but it is clear who loses. The YPG loses, and the Kurdish population loses," said Joost Hiltermann of the International Crisis Group think tank. "Their bargaining position is basically reduced to nil."