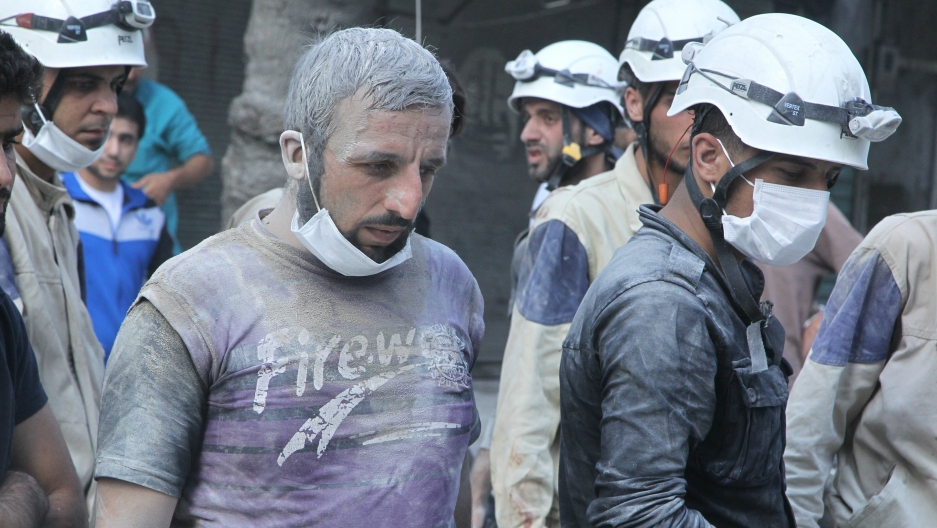 Residents and members of the Syrian Civil Defense, or "White Helmets," look for survivors at a damaged site after what activists said was a barrel bomb dropped by forces loyal to Syria's President Bashar al-Assad in the Al-Shaar neighborhood of Aleppo, Syria, Jan. 26. 2016.

Search and rescue workers in Syria say civilian lives are at risk after being hit by a freeze in US funding for their organization.

The US is currently reviewing its support for the Syrian Civil Defense, known as the White Helmets, and other Syrian assistance programs worth around $200 million.

A State Department official told PRI that the review came at the request of President Donald Trump. They added that the US has provided more than $33 million in financial support to the group since 2013.

The stalling of funds appears to be the latest effort by Trump to reduce US involvement in Syria, contradicting advice from senior defense officials who advocate long-term engagement.

Raed Salah, the head of the White Helmets, told CBS that a long-term halt in funding would have a “serious impact on our ability to provide the same intensity and quality of services that we currently provide to civilians.”

Another representative said the move would “negatively impact the humanitarian workers ability to save lives."

The White Helmets, named after the distinctive protective headgear they wear while carrying out rescues, have more than 3,000 civilian volunteers across rebel-held areas of Syria.

In areas government-run emergency services cannot reach, they are the first to respond to airstrikes carried out by the Syrian regime and the Russian air force.

The group has also documented the aftermath of US airstrikes in Syria, on one occasion contradicting the Pentagon’s account of an airstrike which killed dozens of civilians.

They film much of their work pulling people from the rubble of devastated buildings, documenting the aftermath of attacks as they try to save lives.

The group was profiled in an Oscar-winning documentary. But it has also been the subject of an online smear campaign by Russian-backed media and pro-government activists, who accuse the group of being a propaganda construct of NATO and of working with extremists.

The review of US funding for the White Helmets follows the freezing of some $200 million dollars in March, also at Trump’s request, for stabilization projects in Syria, including the removal of unexploded weapons and the restoring of water and power supply.

The aim of these projects was to restore some normality in areas previously controlled by ISIS militants, in the hope of preventing the group’s return.

But Trump has clashed with defense officials over the US role in Syria, and has spoken often of his desire to end its involvement there as quickly as possible.

“We’re knocking the hell out of ISIS. We’ll be coming out of Syria, like, very soon,” the president said in March. “Let the other people take care of it now.”

Secretary of State James Mattis has instead called for a longer-term presence for the roughly 2,000 troops in the country, in order to ensure the defeat of ISIS and contain Iranian influence.

This is beyond belief and must be fixed immediately. The White Helmets (@SyriaCivilDef) are volunteers who have heroically and selflessly saved tens of thousands of lives https://t.co/VRIUFdOnm3

The stalling of funds appears to be aimed at pushing other countries with an interest in the conflict, such as Saudi Arabia, to fill in the gaps as the US pulls back.

“The president has been clear that partners and allies should assume a larger role in stabilizing Syria,” the State Department official said.

But analysts say that might not be possible, and that US financial assistance to Syria serves a purpose.

“Charitably, you could read it as an attempt to encourage more burden sharing by allies. But many of the United States’ friends are already contributing, and it doesn’t seem possible that they’ll be able to fill the gap left by the Americans,” says Sam Heller, a senior analyst on non-state armed conflict with the Crisis Group think tank.

“This stabilization assistance has its own positive impact, but it’s also a complement and a prop for America’s other lines of policy effort in Syria, whether that’s deescalation in the country’s southwest or securing an enduring victory over ISIS in the northeast. All of that will be undercut if this assistance isn’t restored,” he says.

Samantha Power, the US ambassador to the United Nations in the Obama administration, tweeted that the decision to stop funding the White Helmets was “beyond belief and must be fixed immediately.”

“The White Helmets are volunteers who have heroically and selflessly saved tens of thousands of lives,” she added.

Firas Abdullah, an activist and volunteer with the White Helmets, told PRI that the organization has not been officially informed of any halt to their funding, and that they receive support from a variety of different organizations.

But he said the organization’s work is vital for saving lives.

“The situation can’t be imagined without the White Helmets. They are the ones who are rescuing and saving people under their houses after they’ve been destroyed above their heads,” he said by phone from the Aleppo countryside, in northern Syria.

“It’s very important to support the White Helmets," he said. "They are working for humanity.”

Meanwhile, as the Trump administration reduces funds for reconstruction efforts, it continues to bomb Syria. In the last week, the US-led coalition carried out 22 airstrikes against ISIS targets.