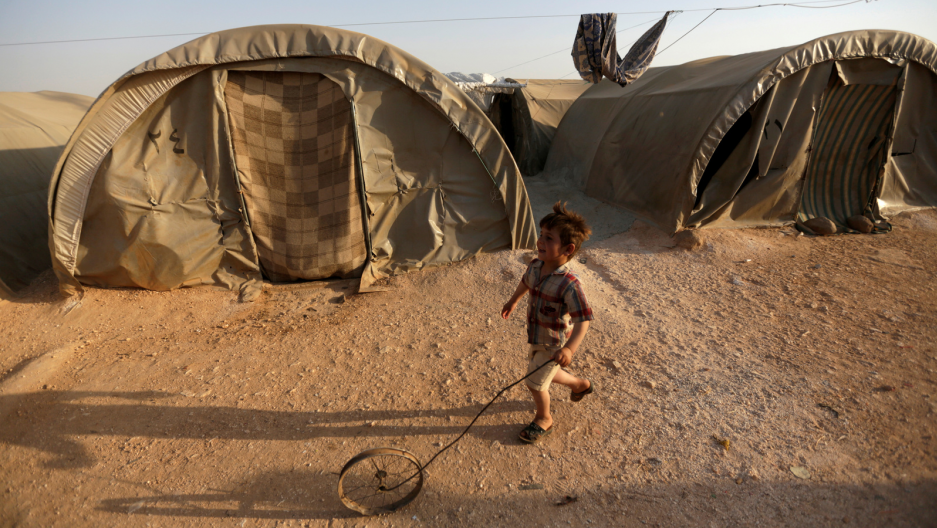 An internally displaced Syrian boy plays with a wheel in Jrzinaz camp, in the southern part of Idlib, Syria, June 21, 2016.

In early September, President Donald Trump did something strange: He took a break from baiting his enemies and boosting his allies on Twitter to tweet a warning to the Syrian government, Russia and Iran about Idlib, the last rebel-held province in Syria.

“President Bashar al-Assad of Syria must not recklessly attack Idlib Province,” the president wrote on Sept. 3. “The Russians and Iranians would be making a grave humanitarian mistake to take part in this potential human tragedy. Hundreds of thousands of people could be killed. Don’t let that happen!”

The United States has troops on the ground in Syria, but Trump has never seemed particularly interested in gains and losses on the ground in the complicated civil war. As a candidate, he railed against American wars in the Middle East that had cost the nation money and lives, promising not to embroil the country in future misadventures under his leadership. US forces were in Syria to fight ISIS and fight ISIS only. The civil war between rebels and the Syrian government was not America’s problem and not America’s fight.

Trump has twice carried out strikes against the Syrian government after it used chemical weapons. But both strikes were limited in nature and seemed to be Trump enforcing the “red line” that his predecessor Barack Obama had failed to. However, Trump’s talk on Syria remained focused on getting American troops out after the defeat of ISIS. And when Syrian government forces cornered rebels in southwestern Syria earlier this year, the US did nothing.

But while Trump ran on an anti-interventionist Middle East policy, he simultaneously pushed a hard-line anti-Iran stance that seemed incompatible with promises of limited involvement in Syria and the broader Middle East.

Now, the administration appears more ready to back up its Iran rhetoric with actions — actions that would mean a deeper and prolonged involvement in Syria.

A few weeks after Trump tweeted his warning on Idlib province, National Security Adviser John Bolton said that US troops would remain in Syria as long as Iranian troops and their proxies were “outside Iranian borders.”

“Trump wants an aggressive policy,” said Bassam Barabandi, a former Syrian diplomat who defected in Washington during the early days of the conflict. “He wants something to show his constituents that as president ‘I’m doing something very strong on Iran.’”

While the Trump administration’s Iran stance clearly plays a role in the sudden shift on Syria, the president’s own emotions and personal interactions may have had something to do with it as well.

Speaking to the conservative Daily Caller website in a September interview, Trump recalled meeting a Syrian woman at a gathering of supporters in Indiana when he was asked about his evolving Syria policy and his warnings on Idlib province.

“She was from the area, she said she thinks her family is going to be killed,” he said. “I went out and then yesterday I read a big story about it, and I said, ‘you know, that woman is potentially right.’”

Later, speaking at a press conference following the United Nations’ General Assembly meeting in New York, Trump offered more details, saying that somebody stood up at a meeting with supporters to tell him about a province in Syria with three million people who were in imminent danger. By the president’s telling, it was the first time he’d heard of Idlib province or the danger it was in.

“I said, ‘That’s not going to happen. I didn’t hear of Idlib province,’” Trump said. Then, he read a story in The New York Times: “I said, ‘Wow, that’s the same story that the woman told me that I found hard to believe because why would — how would anyone do that to three million people?”

Related: She’s one of the Syrian refugee ‘hero swimmer’ sisters. Now, she's in a Greek prison.

Last week, the Wall Street Journal reported that the Syrian woman was Rim Albezem, a New Jersey cardiologist who heads a chapter of the Syrian American Medical Society, an organization that provides humanitarian and medical assistance to Syrians impacted by the war. Syrian activists raised $100,000 to buy her and a Washington-based Syrian television anchor seats at an "intimate roundtable" at the president’s Mar-a-Lago resort and later spent additional money to get Albezem into a fundraiser for Indiana senate candidate Mike Braun, where she lobbied Trump in person. Activists also took out ads on “Fox and Friends” — assuming the president was watching — and hired a lobbyist. The goal was to get Trump to change his tune on Syria. And it worked.

Trump later took credit for halting what had looked like an imminent attack on Idlib.

“When you literally don’t know anything about the subject, then yes, it is going to be the small personal experiences like that, as scary as it is for us to see,” said Charles Lister, a senior fellow at the Middle East Institute in Washington and the author of "The Syrian Jihad." “Putting on Fox News, or meeting somebody at a political rally, that forces him to think about a certain issue that otherwise is largely irrelevant, at least in terms of the details.”

Emotions and personal interactions also seemed to play a role in the president’s decision to strike the Syrian government after a chemical weapons attack in April 2017. After chemical weapons were used against the town of Khan Sheikhoun, a “heartbroken and outraged” Ivanka Trump was influential in making her father take action, according to her brother, Eric.

Trump, who had once famously said he would look Syrian children affected by their country’s war in the face to tell them they could not come to America, appeared moved by the images of dead and dying children in Khan Sheikhoun, saying that the attack had a “big impact” on him and forced him to rethink his attitude on the conflict.

Now, the US has shifted on Syria once again, but experts see success in confronting Iran in Syria as difficult — at least in the short term with so few American troops on the ground.

“It’s ridiculous. The idea that keeping troops in a corner of northeastern Syria is going to deter the Iranians is crazy,” Lister said. “Two-hundred-plus Israeli air strikes over the last couple of years haven’t deterred the Iranians, so plunking 2,000 troops down in largely isolated FOBs [forward operating bases] with very minimal patrolling activities isn’t going to do much for the Iranians.”

The 2,000 or so US troops in Syria are largely confined to advising and assisting the Syrian Democratic Forces, a Kurdish-led anti-ISIS coalition strong in northeastern Syria. Most are far from Syrian government forces, Iranian troops and Iranian proxies. The presence of US troops could serve as a deterrent to Iran and its allies from advancing into new areas, but rolling back Iranian influence seems unlikely without a more robust deployment or a willingness to support anti-regime Syrian rebels.

To Nicholas Heras, a fellow at the Center for New American Security’s Middle East Security Program, confronting Iran in Syria is not a short-term mission.

“To deter and diminish Iran is possible, but it is going to take a long time,” he said. “Probably decades, not years. And that is not being communicated to the American people.”

US officials, Heras said, “would swear on a stack of Bibles they were not going to create and an Afghanistan-like situation where a decade and a half from now US forces would still be in Syria.”

“They’re setting the conditions just for that, for US engagement in Syria that could be as long as Afghanistan,” he added.

What comes next in Syria is difficult to say. Last month, Turkey, which backs Syria’s rebels, came to an agreement with Russia to establish a demilitarized zone around Idlib and avoid a Syrian government offensive on the province. But previous ceasefires in the war have collapsed and on Sunday, Syrian president Bashar al-Assad said the Idlib deal was a “temporary” measure. If the military does come, Washington could face pressure to show how serious it really is about its warnings on Idlib and its willingness to confront Iran.

But given the sharp turns on Syria already by the Trump administration, unpredictability reigns.

“The challenge with Syria right now is everyone has to read a tarot card as to what exactly will happen with the Trump strategy,” Heras said. “As recently as two months ago, the Trump administration was allowing Assad and his allies to reconquer all of western Syria. It’s tough to wrap our heads around how you can displace both Assad and Iran from western Syria with the leverage we have on the ground there now.”