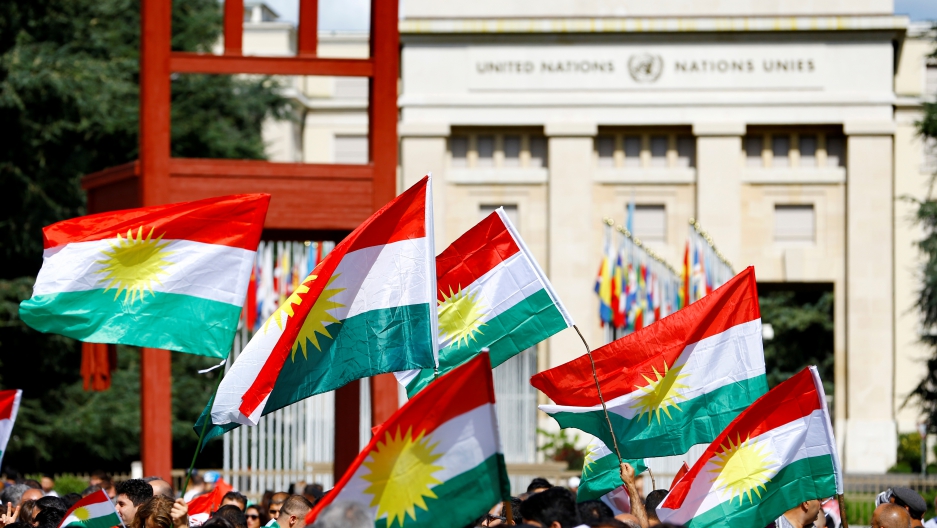 People wave flags at a demonstration in support of the referendum for independence of Kurdish Iraq in front of the Palais des Nations in Geneva, Switzerland Sept. 10, 2017.

On Sept. 25, Iraqi Kurds will vote in a referendum that will reveal whether they want to stay part of Iraq, or go their own way and establish an independent Kurdish state. Kurdish leaders, especially President Masoud Barzani who has been the driving force behind the movement, say the vote is binding and it is for independence.

For the more than five million Kurds living in the northern provinces of Iraq, the upcoming referendum is a dream come true. They hope a Kurdish state would bring an end to years of persecution, uncertainty and treatment as second-class citizens in Iraq. Most importantly, Kurds say, having a state of their own means Kurds will no longer be dragged into Iraq’s endless cycle of violence and sectarian war that has gripped the country for many years.

But the independence vote has many others worried — especially the Iraqi government. Baghdad is against the referendum or any talk of Kurdish independence, arguing that it will lead to the disintegration of Iraq.

Iraqi leaders have not made any military threats against the Kurdish project. In July, Iraqi Prime Minister Haider Abadi was asked at a press briefing what his government’s response to the Kurdish referendum would be. He said, “What I will do? Will I deploy tanks, for example? I will not do that."

On the other hand, the Iraqi army is locked in a bloody war with ISIS and Shiite parties are tied down by political rivalries. Shiite leaders say the referendum is unconstitutional.

In response, the Kurds argue that Baghdad has violated its own constitution in every way possible — such as cutting the Kurdish region’s share of the federal budget, blocking foreign arms supply to the Kurds, sidelining Kurds in government and military institutions and stopping the Kurdish region from selling its oil in the international market. These are now the basis for the Kurdish independence move.

Related: The curse of oil in Iraqi Kurdistan

Kurds overwhelmingly voted for the Iraqi constitution in 2005 because it promised to treat them as equal partners in the post-Saddam Hussein Iraq. Now, they believe, that constitution has been rendered worthless.

Other countries such as Turkey and Iran have expressed concern about the Kurdish plan. For years, Turkey and Iran were against Iraqi Kurdish freedoms because they feared their own large Kurdish populations would seek similar freedoms. Now, Turkey says their concern is bringing further instability to the Middle East as a result of the Kurdish independence vote. But the Kurds have an answer for that, too.

Related: Trump meets Turkey's Erdogan as the US vows to arm his enemies

Kurdish President Barzani told the BBC on Monday, “When have we ever had stability and security in this region that we should be concerned about losing it? When was Iraq so united that we should be worried about breaking its unity?”

Kurds believe they have been, and will continue to be a force for good in the region. Kurdish Peshmerga forces have been fighting ISIS for the last three years and have sheltered 1.8 million Iraqi and Syrian refugees of all faiths and ethnic backgrounds. The Kurdish region is a melting pot of cultures, religions and politics with Kurds, Arabs, Turkmen, Christians and Yazidis living side by side. In addition, as an autonomous region it has not posed a threat to any of its neighbors such as Iran and Turkey. On the contrary, the Kurdish region has been a major trade partner and lucrative market for Iranian and Turkish businesses.

Then comes the United States. Washington has been asking the Kurds, at least publicly, to postpone the referendum. In a meeting with the UN representative to Iraq in July, US Ambassador to the United Nations Nikki Haley “conveyed her appreciation for the legitimate aspirations of Iraqi Kurds.”

The Trump administration and a number of senators and congressmen appreciate the Kurds’ effective fight against ISIS but fear that this month’s vote will strengthen Shiite hardliners in Baghdad in next year’s general elections.

Regardless of the official and diplomatic line, Washington and its allies, including Saudi Arabia and Turkey, seem to realize that Iraq as it once was, is gone. Now, militia groups in Iraq are more powerful than the army and essentially run the state. And the brutal ISIS episode that killed thousands and alienated millions has further torn the country apart. Besides, the Kurds have been running their own affairs for 25 years. As a stable and secure region and now a major hub of international diplomacy and coalition forces the Kurds are in fact, more like a state than Iraq is.

Ayub Nuri is a Canadian Kurdish journalist and the editor-in-chief of Rudaw English. He recently published "Being Kurdish in a Hostile World" (2017).