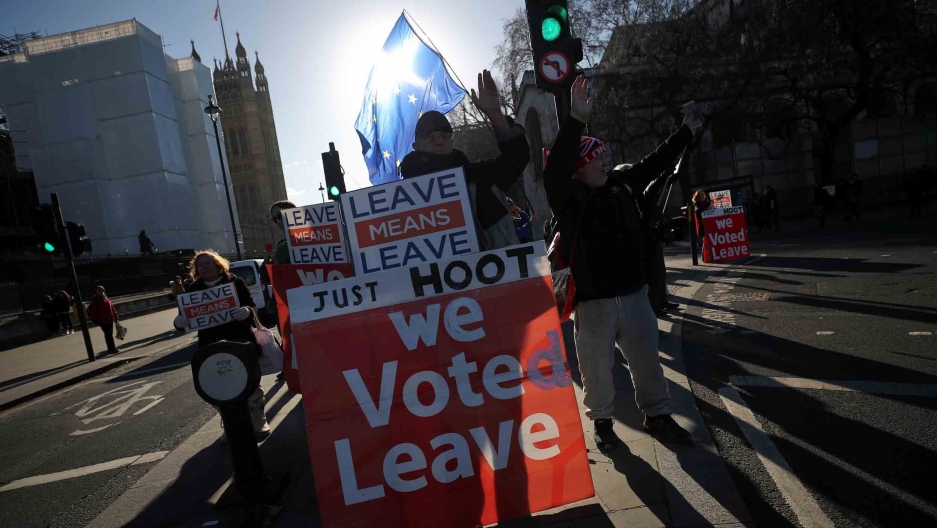 Anti-Brexit and pro-Brexit protesters stand together during a demonstration outside the Houses of Parliament in London, Britain Jan. 28, 2019.

As British politicians struggle over the details of a bitter divorce from the European Union, two and a half years after the Brexit referendum, assessing the state of the EU — and reflecting on how it came to be — makes a lot of sense. Especially for those who care about the power of Europe to influence America’s stability, as well as the financial markets.

A vision of a united Europe was born out of the ashes of World War II and early supporters included former British prime minister Winston Churchill, who was one of the first to champion the idea of a “United States of Europe” during his historic 1946 speech at the University of Zurich, in Switzerland.

The European Union is now a vast political and economic union of 28 member countries and, with more than 500 million people, its combined population is the third largest in the world after China and India. It did not begin as a large political project but rather as a series of small steps in an American-led effort to promote postwar security, according to Mark Blyth, professor of international economics at Brown University.

“An interesting aspect of the story is how the United States itself was not just present at the beginning, [but] was actually quite generative of the project,” he said.

It started in 1951 with the creation of the European Coal and Steel Community, an organization of six western European countries.

“The basic idea here was originally an American [one] ... which was you can’t kind of tell the Germans not to be an industrial power,” Blyth explained.

The belief was that the risk of Germany or any European country brutally dominating the region again after World War II, could be diminished by making sure that the “weapons of warfare, particularly heavy metals, coal, steel — the stuff you need for tanks and causing trouble — was in a sense spread out amongst the Europeans themselves,” he said.

Europe’s “dependence on the US was all part of the plan” of a generation of postwar American leaders, according to author and journalist Claire Berlinski.

It would take decades for the European Union we know today, with its single market, open borders, expanded membership and common currency, to be developed through a series of treaties.

Gillian Tett, US managing editor of the Financial Times, worries that the vision of those who first imagined a united Europe has been forgotten in the long process of creating it.

“America has all the founding fathers, the Hamiltons, all of those,” she said, but “no one really knows quite who created a modern Europe.”

Related: After the UK, which nations are more vulnerable to an anti-EU revolt? These 5 charts may tell you.

She has a point. Rarely does anyone talk about those early European leaders who inspired and pioneered the project, and good luck trying to find any of them on euro banknotes, she says.

As Tett reflects on what the EU has become, she sees a system plagued by bureaucracy in Brussels. “It’s one thing to say: yes, we’d like to be the United States of Europe, or at least punch above our weight on the world stage,” she said. “To do that though, you need to have clear-cut decision making.”

Instead, Tett fears that a project which was created, “with the hope of reducing hostilities between different nations,” has actually “exacerbated tensions” in recent years, as demonstrated by the handling of Greece’s economic crisis.

“What’s ended up happening is that Germans and Greeks are more at odds with each other than they’ve ever been, in recent history, which is a tragedy,” she said.

In the wake of the 2008 financial crisis, Blyth says Europe and America have experienced similar challenges. There has been a significant increase in economic inequality and a rise in nationalism, both of which have led to, “a loss of faith in the mainstream (elite) political classes that have been governing Europe and have been the drivers of the European project,” he explained.

Europe itself has become a target, he said, and “the football” in a “new nationalist competition.”

Nonetheless, neither Tett or Blyth have lost hope in the European project, even though they say they believe “the system has taken a good beating,” over the past 10 years and is in urgent need of reform.

On Tett’s wish list: a clear statement from European leaders about their vision moving forward, and a serious effort to bring the union’s economics and politics into closer alignment, along with much greater accountability and transparency for its citizens.

These are all problems that can be solved, Blyth argues and if they are, Europe “will still be here.”