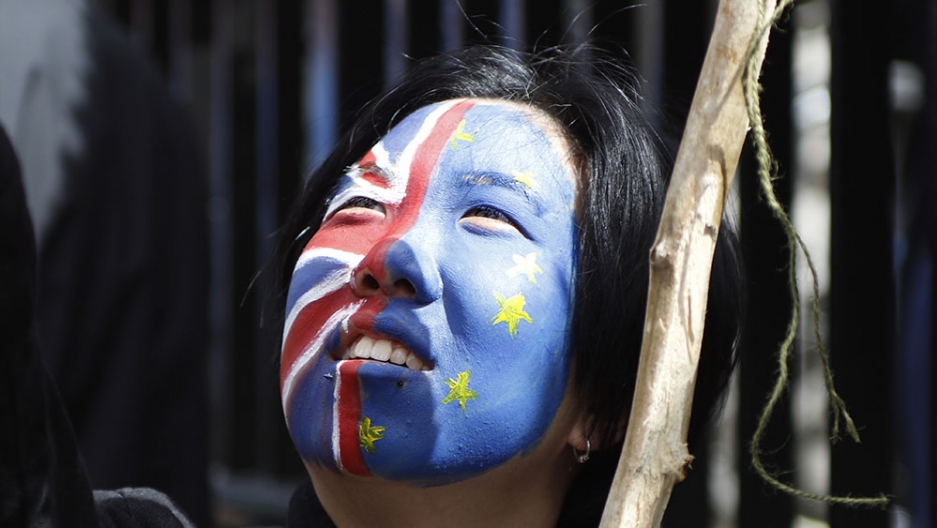 A woman looks upwards during a 'March for Europe' demonstration against Britain's decision to leave the European Union, in central London, Britain July 2, 2016.

The UK vote to exit from the European Union revealed the polarization of British society. There were gaps between the young and old, the haves and have nots, the more and less educated, and the local- and foreign-born.

Immediately after the polling results were announced last month, fears were rife that Brexit would trigger a domino effect, empowering an anti-EU movement across the continent. Which country, if any, would follow the UK's footsteps?

We tried to address that question with a different approach. Using the latest EU data, we found out to what extent other major EU member countries share the indicators that contributed to Brexit.

The generational divide was evident in the referendum. Places with higher population of older voters picked Brexit while places with more younger voters chose to remain in the EU.

Data show that the population age 15 to 49 in the Netherlands, Italy, Germany, France and Finland makes up less than 45 percent of the total population.

All countries have a larger portion of people aged 15 to 49 compared to the population of 50 and above, but the smallest gaps were found in Germany, Italy, Finland, Bulgaria and Portugal. In those countries, the younger age bracket is less than 5 percent larger.

Nativism and nationalism are the main ideological forces behind the Euroskeptic movement. British referendum results showed that foreign-born voters overwhelmingly voted for "remain."

Using that logic, we looked for countries with the fewest foreign-born people. The populations of Romania, Poland, Bulgaria, Slovakia, Czech Republic and Hungary are less than 5 percent foreign-born.

However, even with larger foreign-born populations like the UK (13 percent), it may not be sufficient to change the final outcome.

According to post-referendum analysis by the Financial Times, the two strongest indicators in determining voting preference were education level and occupation. Voters with a degree and a job classified as a “professional occupation” were more likely to vote "remain."

Analysis by the Guardian found that annual income was another strong indicator. The higher your salary, the more likely you would vote to stay in the EU.

These findings point to another important factor — income inequality. The focus of the political establishment on urban development and the failure of their trickle-down economics have widened the gap between the rich and the poor, the urban and the rural. This in turn has fueled far-right populist political movements across the continent.

The EU data show that Bulgaria, Spain, Greece, Italy and Germany not only have higher income inequality, it has worsened in the past decade. Although Romania and Portugal rank high, income gaps in both countries have significantly narrowed.

Poverty leads to social and political discontent, which could lead to revolt against status quo if not addressed. According to 2014 data from the EU, one out of every five residents in the UK were at risk of poverty or social exclusion. This number has barely changed since 2005.

This number was higher in another nine EU countries. Among them, Greece, Spain, Italy, Ireland and Portugal have seen the number increase significantly in the past decade.

This indicator was developed by the EU as part of its strategy to promote social inclusion. See its definition here.

The fears that the influx of refugees into Europe would burden the welfare system and change a nation's identity are the main drivers of Euroskeptic movements.

The impacts were most felt in countries that took in the highest number of refugees. Five countries have received more asylum applicants than the UK from 2009 to 2015. They are Germany, Sweden, France, Italy and Hungary.

There were more than 1 million asylum-seekers in Germany, more than double that of Sweden, which had the second-highest number.

Based on these five factors, the countries most vulnerable to Euroskeptic movements are Italy (with four of the five factors we chose), Germany (3), Spain (2), Greece (2), Hungary (2) and Bulgaria (2).

It should be noted that this simple analysis does not take into account the different sociopolitical circumstances and other unique factors in each country, which can play a much bigger role.