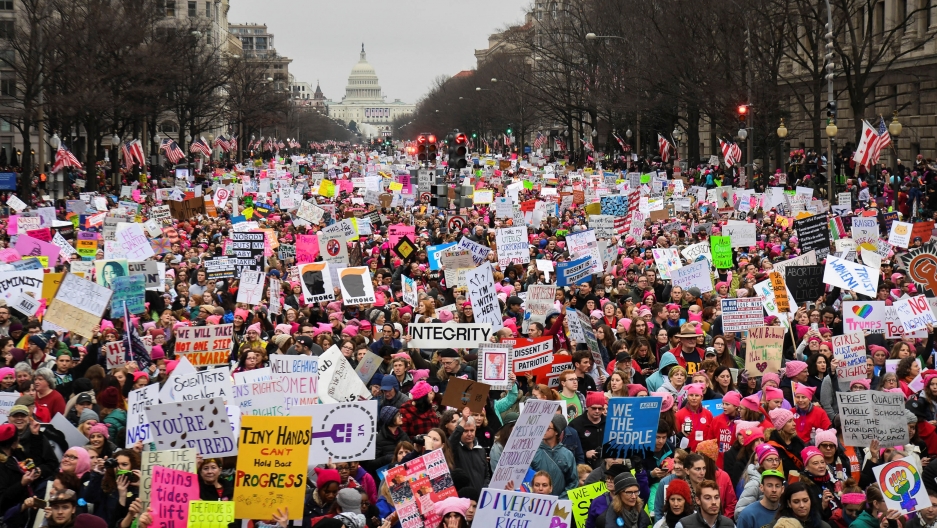 Hundreds of thousands march down Pennsylvania Avenue during the Women's March in Washington, DC, Jan. 21, 2017.

When Cecelia Gomez of Barcelona, Spain, heard that Donald Trump was elected US president, she was shocked. Even though this was not her president, she still thought that she had to speak up to show how upset she was.

"For us, it wasn't so much an anti-Trump march," Gomez said recently from her home. "You know, he was sort of the symptom of a greater disease, which is just xenophobia and machismo and chauvinism and all of those things that, obviously, we stand against."

She saw something on Facebook about the idea of having a Women's March in her city — like the one planned in the US. She wrote to one of the people who had posted about it and said, "Hey do you want help?" She then found herself helping organize the 2017 march in Barcelona where 2,500 people hit the streets to protest not only Trump, but to get a bigger message out — about treating women with respect.

Gomez wasn't the only woman inspired to act after Trump took office. Since the US Women's March happened in 2017, similar marches began popping up all over the globe. Women in Europe, Nigeria, Indonesia, China and Australia started coming together in the middle of January to demand better treatment of women.

This week marks the third anniversary of the Women’s March here in the United States. In 2017, an estimated 1 million people crowded the streets of Washington, DC, just days after Trump was inaugurated. The march was organized partly to protest the new president — and some of the remarks he made on the campaign trail about women. But more broadly, it was about a long, simmering frustration with inequality and the lack of women’s rights globally.

Related: In 2019, women’s rights are still not explicitly recognized in US Constitution

Marchers carrying signs that read "Babes not Bigotry" and "A Women's Place is in the Revolution" were in women's hands as they crowded the streets in cities all over the country in 2017 and 2018.

The marches channeled a level of energy and anger that fueled the #MeToo movement and propelled a record number of women elected to office last November.

More recently, the US Women’s March has experienced some tension at the top. This year, the march in Washington has been hit by accusations of anti-Semitism against some of the organizers. One of the leaders, Tamika Mallory, has faced criticism for her association with Nation of Islam leader Louis Farrakhan, who has a history of making anti-Semitic and homophobic comments. It’s all led to a loss of support from groups like the Democratic National Committe and the Human Rights Campaign. In New York, there are now two competing marches scheduled for this weekend. Meantime in Eureka, California, they’ve canceled their march over concerns that it was  “overwhelmingly white.”

So, yes, there’s some drama.

But to march organizers outside the US, like Natalee Stack, these splits over diversity and bias seem like a distraction. Stack is an organizer of the Women’s March in Kingston, Jamaica. And she thinks that ultimately, the divisions are just a hiccup.

"These women should not cancel the march but rather reach out. ... They should reach out to other women and try and include them or to find out why are we lacking diversity here?"

"These women should not cancel the march but rather reach out," Stack said. "They should reach out to other women and try and include them or to find out why are we lacking diversity here?"

Stack says her biggest problem in Jamaica has more to do with getting leaders to pass legislation that protects women and girls against sexual violence. Marchers there are focused on the issue of domestic abuse. She says there was movement on some laws, but not much has been done since their former president, a woman, left office in 2016. One of the action items she wants activists in Jamaica to take on is a gender violence summit. She says she wants to meet with the government directly and thinks the energy from the march will make that happen.

Related: These are the women who made history in this year's midterm elections

She's seen some of the negative headlines about anti-Semitic remarks, but thinks the march is much bigger than that.

"I think it's very trivial and it's petty. And next Saturday, women will march. And you know, the movement will continue.”

For Gomez, though, the arguments among US organizers are taking a toll on her group, especially the anti-Semitism accusations.

“You know, it has affected us internally as a group. We've actually lost some members because of it. And you know, luckily, we are able to remain respectful and friends with each other and understand why those who have decided not to continue with the Women's March [have come to that]. And we feel that their reasons are really justified in a lot of ways."

She says the divisions in the US are making her group feel like they need to attract a more diverse group of women.

“And for us, it's never been about, you know, these women that are named the leaders of the movement — that for us, every single person who participated in can be a leader.”

“And for us, it's never been about, you know, these women that are named the leaders of the movement — that for us, every single person who participated in can be a leader.”

Gomez says Barcelona is already a very politically active city. She points out the thousands of women who turned up to protest the outcome of the "Wolf Pack" gang-rape case as just one example.

Thobeka Gikaba, an organizer of a march in Johannesburg, says the American marchers already seem diverse, especially compared to what she sees in her country. In South Africa, she says there is a lot of tension between white and black South Africans going back to apartheid. Despite that, she says some white women have joined the march there.

"With the US, I've seen a lot of women of color, and you know, Caucasian people engaging together to say that, 'OK, we've all faced some sort of problem in terms of patriarchy within the country. So, how can we come together to solve that?'"

She says she thinks the US organizers need to get back to the reason they organized in the first place.

“So, I think that for me personally, I wish that people in America would just come together and realize that OK, yes there were injustices that happened and you know, not just on black people but the injustices that happen to white people in the past. You know, everyone has faced some sort of injustice on this Earth. It's just a matter of how do we as people come together so that we solve those injustices together without actually pointing fingers for the mere fact that we have a certain skin color.”

For Gikaba, Stack and Gomez, they’re still looking to see how leaders of the Women’s March in the US handle the divisions, but for their part, they have work to do. Being a part of a global Women’s March was always about representing the interests of their own communities.

And for many women marchers here in the US, leader Linda Sarsour says, they’re hoping they can move beyond these tensions and focus their efforts on the 2020 election where, this time the message for her is: “it's anybody but Trump.”