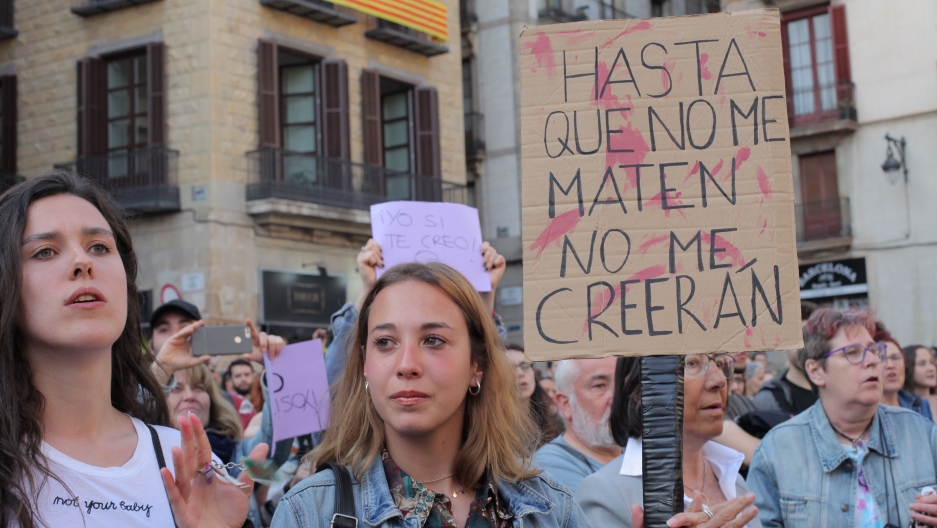 This sign being held up at the protest reads, "Until they kill me, they won't believe me."

Anger and indignation swept Spain on Thursday after a long-awaited verdict did not find five men guilty of gang-raping an 18-year-old woman during Pamplona’s annual Running of the Bulls in 2016.

Following a protracted trial many believe put the plaintiff under more scrutiny than the defendants, the men were condemned to nine years of prison each for the less severe crime of sexual abuse, instead of the 22 years and 10 months demanded by the prosecution.

By evening, thousands had flooded the streets and plazas of major cities from Madrid to Seville. In Barcelona, protesters gathered before the city council chanting, “Yo te creo”  (“I believe you”) and “No es no” (“No means no”), banging pots and pans and jiggling keys.

“On the one hand, I feel indignant about the sentence,” Claudia Pradas, 22, told PRI. “But on the other, I’m happy because we’ve organized this protest so quickly. People are finally waking up, and that’s a good sign.”

The case known as La Manada — or “The Wolf Pack,” after the five men’s self-given moniker — has dominated Spanish headlines for two years. And it fueled Spain’s own iteration of the #MeToo movement, with a number of massive rallies and social media campaigns voicing support for victims of assault — a widely underreported crime in Spain.

On Thursday, #LaManada was the No. 1 worldwide trending hashtag until it was replaced by around 9 p.m., local time, by Bill Cosby (he was convicted of sexual assault). 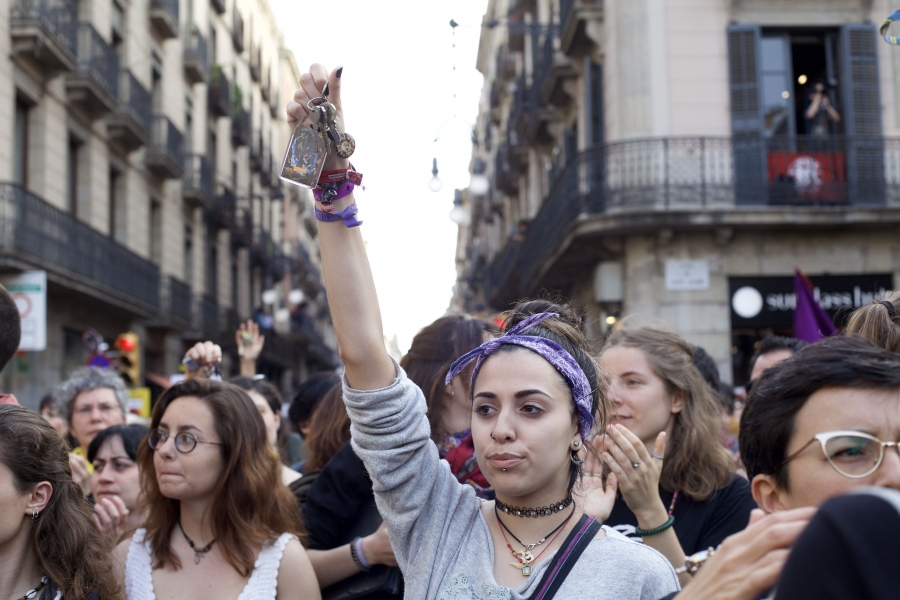 In Barcelona, protesters gathered before the city council chanting “Yo te creo” (“I believe you”) and “No es no” (“No means no”), banging pots and pans and jiggling keys.

In her testimony last November, the plaintiff — whose name has been kept out of the media to protect her identity — recounted how, in the early morning hours of July 7, 2016, the five men — strangers to her until then — led her into a doorway and took turns raping her before seizing her phone and fleeing the scene. Out of shock, she said, she did not cry out or resist the assault. Seizing on this detail, the men’s defense argued that her alleged passivity (which could also be seen in a series of WhatsApp videos the men shot) proved she had consented to having group sex and only changed her tune later, out of embarrassment.

Marisa Fernández Gálvez, an attorney with the Dones Juristes (“Women Jurists”) association in Barcelona, told PRI the verdict was “a failure of justice in democracy.”

“Justice sides with men, so in order for one man, or multiple men, to be condemned for sexual assault, the woman needs to prove she resisted, fiercely,” Fernández Gálvez said. “She needs to have marks and wounds from a knife or a gun.”

Spanish law states that rape must include some element of coercion — violence or intimidation — to be charged as such. Without proof of either of these, a sexual crime is reduced to the vague and less severe category of “abuse.”

Throughout the Manada trial, the defense drew widespread criticism for what were deemed to be victim-blaming tactics — chiefly, presenting a special report containing the plaintiff’s social media posts. It included an Instagram post of a T-shirt emblazoned with the words, “Whatever you do, make sure you take off your underwear,” a famous quote from one of the contestants on the Spanish "Jersey Shore" spinoff, "Super Shore." The defense argued such displays counted as evidence that the plaintiff was inclined to engage in sexual acts of a more ostentatious nature.

Thousands of women responded by taking to the streets last November and splashing social media channels with the hashtag, #YoSiTeCreo, meaning, “Yes, I believe you.” 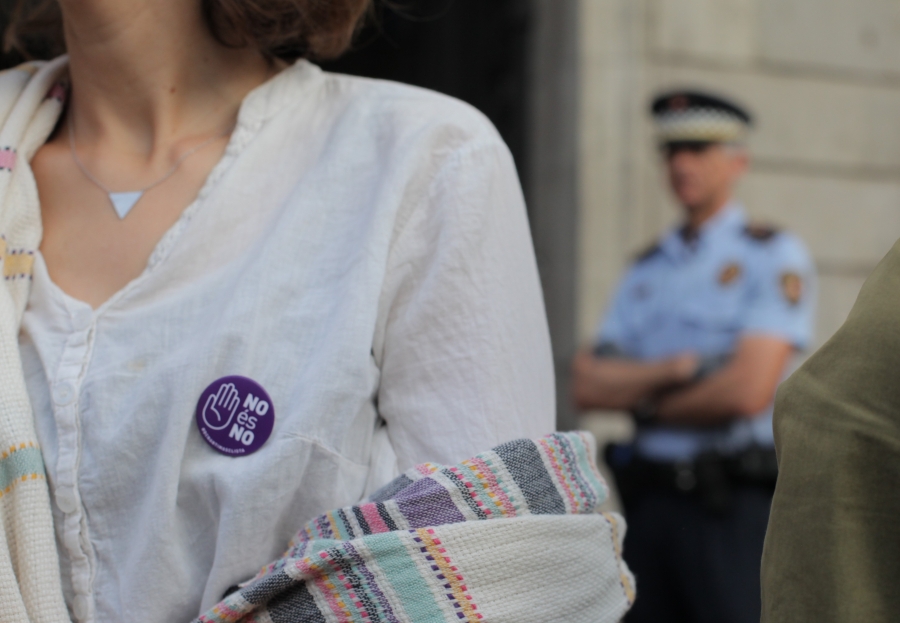 Protesters showed their support for the plaintiff with buttons and other accessories.

“The issue here is that the woman’s word is always doubted,” Fernández Gálvez said. “But a woman doesn’t have to be María Goretti [to be raped].” (According to the Catholic Church, 11-year-old Goretti was stabbed to death in 1902 by her neighbor while trying to save her virtue. She was canonized in 1950.)

In fact, one of the three judges was revealed to have wanted to acquit the men altogether. (In Spain, a majority vote among a group of judges determines the sentence). In his opinion, he wrote that the WhatsApp videos of the sex act showed an atmosphere of “revelry and joy” shared among all participants.

To human rights lawyer Carla Vall, this is simply additional evidence that institutions don’t back women. 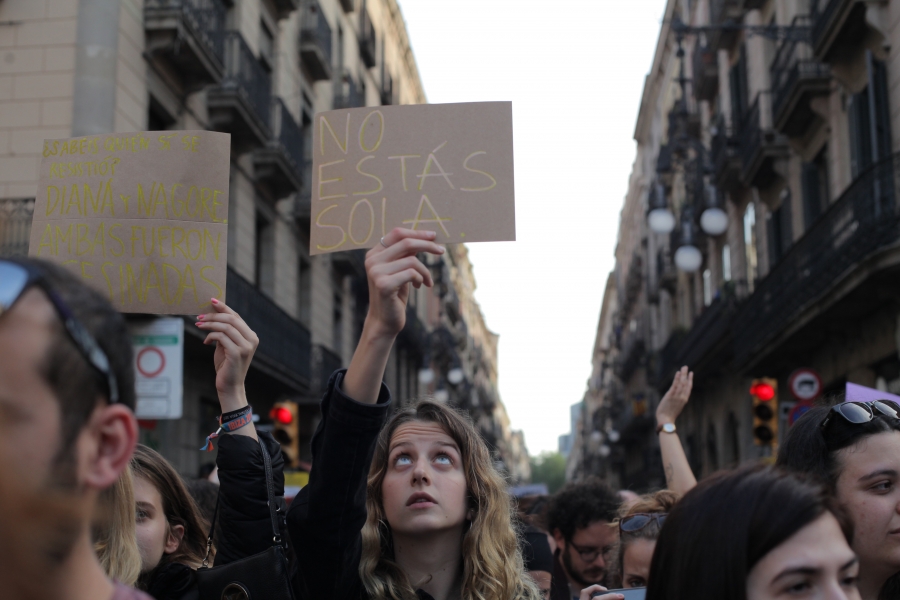 Thousands of protesters took to the streets in Spain following the verdict.

“We saw that an inherently humiliating situation for any woman was described by one of the judges as one from which she derived pleasure and excitement,” she said. “There’s a deep collapse within the judicial system.”

However, the case’s scope has succeeded in bringing unprecedented attention to sexual violence in Spain, Vall said. “It’s made our whole society enter the debate; it’s helped us talk about the sexual violence we all experience and it’s put it on the political agenda.”

Barcelona Mayor Ada Colau, former Catalan president Carles Puigdemont and many other high-ranking politicians all took to Twitter to voice their indignation.

So did the National Police, albeit in a more cryptic fashion. Both the prosecution and defense have said they will appeal the ruling.