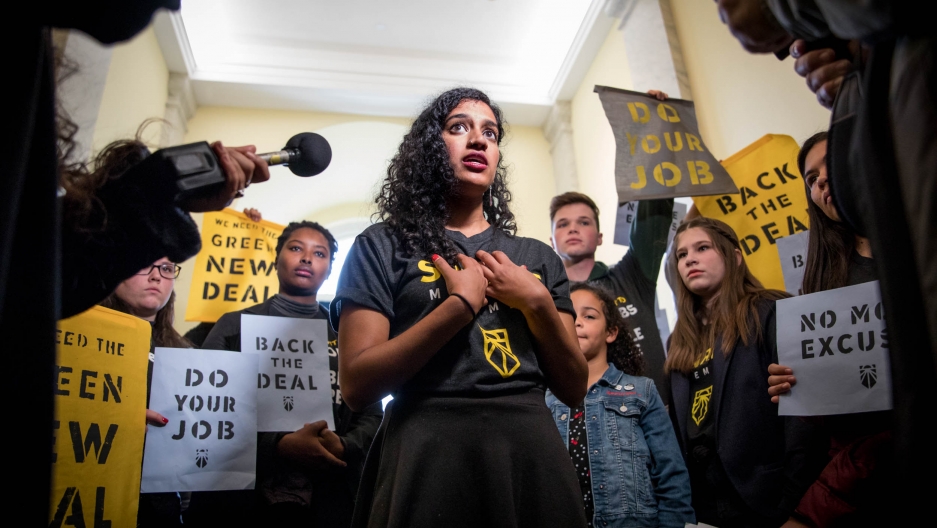 Varshini Prakash is shown at a Sunrise Movement sit-in in Nancy Pelosi's office on Dec. 10, 2017.

“This is going to be the Great Society, the moonshot, the civil rights movement of our generation,” the freshman representative from the Bronx said of the Green New Deal at a climate change town hall in December. “That is the scale of the ambition that this movement is going to require.”

In November, Ocasio-Cortez sketched out her vision to create a massive green jobs and infrastructure program to eliminate greenhouse gas emissions within a decade and guarantee any American who wants one a job along the way. Like just about everything Ocasio-Cortez does, the idea got a lot of attention.

Related: New Chinese policy is forcing people to think: Is there a better way to recycle?

But it didn’t start with her.

The concept of a “green” version of the Depression-era, New Deal policy has been floated by everyone from The New York Times’ Thomas Friedman to the United Nations over the past decade or so.

But in its current form, it’s the brainchild of the Sunrise Movement, a youth activist group that's been working with Ocasio-Cortez since before she got elected.

Sunrise was founded about a year and a half ago by six recent college graduates, veterans of organizing climate campaigns from their campuses.

“All of us were feeling this sense of unease and frustration that the hurricanes were getting bigger, the fires were getting bigger ... but our movements weren’t growing with them,” said Varshini Prakash, one of Sunrise’s six co-founders, who organized a successful fossil fuel divestment campaign at the University of Massachusetts Amherst.

Sunrise Movement launched in July 2017 with a big idea: the Green New Deal, a series of proposals to move America off fossil fuels fast by creating millions of green jobs.

“We really see it as not just a climate policy, but a socio-economic project to rival some of the greatest projects in American history,” Prakash told The World.

Related: The world struck a major climate deal in Poland. So, what’s in it?

The ambitious idea landed on the national stage in November, when members of the group staged a sit-in in the office of the presumptive Speaker of the House Nancy Pelosi.

Interest in the group has soared since then. According to Sunrise, it has added 100 local chapters since November, and roughly 1,300 people joined the group’s first strategy videoconference of the new year.

In that Jan. 10 call, leaders outlined their plan for 2019, which includes fanning out across the country to recruit new members, demonstrating outside of Democratic primary debates and organizing to get candidates elected that support their vision.

“Everybody who is not with us, we need to kick out in 2020 and elect champions who are going to stand for the Green New Deal,” Sunrise co-founder Will Lawrence said during the call. “And if we do that, we have a window of opportunity to actually pass this thing in 2021.”

So far, likely Democratic presidential contenders including Elizabeth Warren and Cory Booker have supported the idea.

That’s even though the Green New Deal’s goal of eliminating greenhouse gas emissions in America by 2030 may well be impossible. A recent UN report found a goal half that ambitious on a global, rather than national scale, would require unprecedented change in nearly every aspect of life.

“The goal of carbon neutrality in 10 years is not technically feasible, for a host of different reasons,” said Harvard professor and climate change expert Dan Schrag. "But to me, that’s missing the point of the excitement of the Green New Deal. The activism and enthusiasm, partly triggered by Ocasio-Cortez, seems to tie the climate problem in with a variety of other issues — including jobs for all, living wages, health care for all — and that coupling is a new twist in this story, and I think it’s really exciting.”

The Green New Deal is an idea, not a fully fleshed-out policy proposal, so there’s no official budget estimate attached. Sunrise itself estimates the program would cost “trillions.”

Related: An Alaskan village is falling into the sea. Washington is looking the other way.

But activists like longtime Washington, DC, environmental campaigner Ben Weiss say they have to aim high.

“It’s the role of outside organizations to push the system as far as it can go,” Weiss said.

Sunrise wants to do that by assembling what it calls an “army” of young people to get supporters of the Green New Deal elected in 2020.

“We’re pissed off that our leaders have failed to do something about [climate change],” Prakash said, “and we’re going to be left dealing with the repercussions of their inaction. So, we have to be the ones to do it if anything’s going to happen.”

Sunrise's tone is decidedly optimistic, but its messaging and the personal stories its members share includes a healthy dose of outrage. And that isn't unique to young Americans. It’s echoed by young activists all over the world right now.

Fifteen-year-old Swedish climate activist Greta Thunberg stole the show at the December UN climate talks in Poland when she told the assembled world leaders that they were “not mature enough to tell it like it is.”

“We have not come here to beg world leaders to care,” she said. “We have come here to let you know that change is coming, whether you like it or not.”

Sunrise’s Prakash says it’s no coincidence that young people around the world sound as if they’ve read from the same playbook.

“This is a global fight, honestly, to protect the future of human civilization, and I think that’s how our generation really sees it, which is why we’re seeing people rise up in every corner of the world.”

The question now is whether the buzz surrounding the Green New Deal will eventually lead to action in Washington, and beyond.