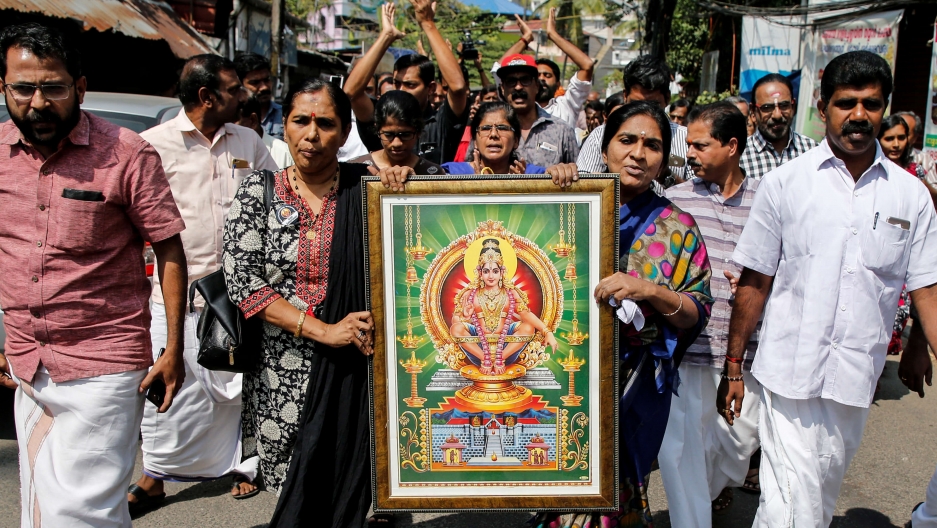 Protesters hold a portrait of Hindu deity “Ayappa” as they take part in a rally called by various Hindu organizations after two women entered the Sabarimala temple, in Kochi, India, Jan. 2, 2019.

Two women defied a centuries-old ban on entering a Hindu temple in the Indian state of Kerala on Wednesday, sparking protests and calls for a strike by conservative Hindu groups outraged by their visit.

There were protests in several other cities in the state, media reported.

India's Supreme Court in September ordered the lifting of the ban on women or girls of menstruating age from entering the Sabarimala temple, which draws millions of worshippers a year.

But the temple refused to abide by the ruling and subsequent attempts by women to visit it had been blocked by thousands of devotees.

The Kerala state government is run by left-wing parties and it has sought to allow women into the temple — a position that has drawn the criticism of both of India's main political parties, including Prime Minister Narendra Modi's Hindu nationalist Bharatiya Janata Party.

The uproar has put the issue of religion, which can be highly contentious in India, squarely on the political agenda months before a general election, which is due by May.

The possibility of more confrontations was raised by a call from an umbrella group of right-wing Hindu groups in Kerala, the Sabarimala Karma Samithi, which is supported by the BJP, for a state-wide protest strike on Thursday.

The BJP called for protesters to be peaceful.

Earlier, the Kerala state president of the BJP described the women's visit as "a conspiracy by the atheist rulers to destroy the Hindu temples."

The party's state president, PS Sreedharan Pillai, told TV channels the BJP would "support the struggles against the destruction of faith by the Communists."

"Let all the devotees come forward and protest this," he said.

Officials from the main opposition Congress party in the state, in rare alignment with their main rival for power at the national level, the BJP, also called for protests.

"This is treachery ... The government will have to pay the price for the violation of the custom," K. Sudhakaran, vice president of the Kerala Pradesh Congress Committee, said in a statement.

Conservative Hindu groups say they believe women of menstruating age would defile the temple's inner shrine. The ban was imposed on all females between the ages of 10 and 50.

Later, media reported it had re-opened.

The two women, identified by police as Bindu Ammini, 42, and Kanaka Durga, 44, had tried to go in on Dec. 24, and later approached police for help, an officer said.

"There was an elaborate arrangement for them to come just after the temple was opened early morning," said the officer, who declined to be identified fearing reprisals from protesters.

"The darkness gave them, and us, cover."

Police were guarding the homes of the women after they left the temple and were prepared to let more women enter the temple, he said.

A video from a police official posted online by Asian News International (ANI) showed two women in the temple with their heads covered.

Ammini told a television channel about their stealthy trek to the temple in the middle of the night.

“We reached Pampa, the main entry point to the temple at 1.30 a.m. and sought police protection ... We walked two hours, entered the temple around 3.30 a.m. and did the darshan," the woman said, referring to a ritual of standing in front of the temple's Hindu image.

The state government defended its decision to protect the women as they went into the temple, saying it was a matter of civil rights.

"I had earlier made it clear that the government will provide protection if any women come forward to enter the temple," said Kerala chief minister Pinarayi Vijayan.

Vijayan told a news conference the women faced no obstruction on Wednesday. It was not immediately clear how they managed to avoid devotees guarding the temple.

On Tuesday, the state government backed a protest by thousands of women, who formed a 385-mile human chain, termed the "women's wall," in support of "gender equality" and access to the temple.

Modi, in an interview with ANI on Tuesday, indicated he felt that the temple issue was more about a religious tradition than gender equality.

Modi said there were temples where men were barred from entering.