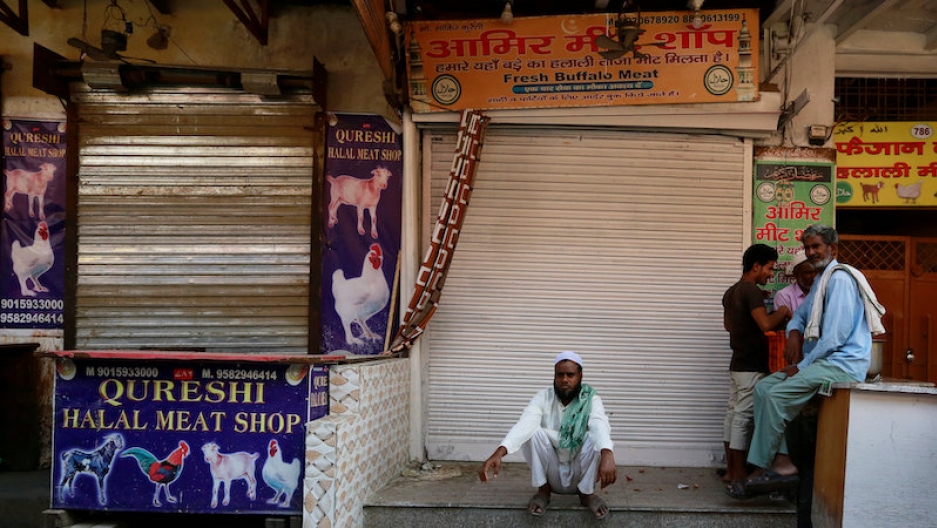 People sit outside the closed meat shops in Gurugram, India.

Indian Hindu hardliners are forcing meat sellers to shut shops in a New Delhi suburb that is home to global outsourcing firms, saying they must respect the feelings of majority Hindus celebrating a nine-day festival.

The drive against the mostly Muslim shopkeepers in Gurgaon during the Navaratri festival is the highest-profile campaign since Hindu vigilantes targeted people engaged in the slaughter of cows, considered sacred to Hindus.

With a national election due by May, some states ruled by Prime Minister Narendra Modi's Hindu nationalist government are drawing accusations that they are not doing enough to curb the activities of Hindu hardliners.

One meat shopkeeper referred to the 1947 division of British India into the independent India and Pakistan.

"This is the first time since partition that we have been asked to close shops for this long a period," said Sajid Qureshi, whose family has been selling meat for decades.

Men are roaming around on motorbikes and surveying areas to check for shops selling meat, said Rajeev Mittal, head of Sanyukt Hindu Sangarsh Samiti, an umbrella organization of 22 Hindu groups.

"Goats, cows are cut and hung up for all to see by the road. So we don't want people who are fasting during the Navratri to see this," said Mittal, who was wearing a red religious mark on his forehead and a saffron shawl around his neck, told Reuters at his office.

Police detained six people in the region on Wednesday after confrontation which turned violent when Hindu groups allegedly forced a meat shop owner to close.

"Any one found forcibly closing meat shops will be dealt with sternly. The municipal corporation will do its enforcement on shops found running without a license," said Vinay Pratap Singh, Deputy Commissioner of Gurgaon.

Qureshi, who was sitting with his friends outside a closed meat shop near a mosque, said they had agreed to the demands of the Hindu groups as they wanted to avoid confrontations.

Four other meat retailers told Reuters they were suffering heavy losses but were scared to keep their shops open, adding that it looked unlikely that they would be allowed to reopen for another week.

Hindu groups argue that they are asking meat shop owners with proper licenses to close only during the nine-day period, but want shops without licenses to be permanently shut down.

There are 95 licensed meat shops in the region, while there could be up to 60 without licenses, according to Ashish Singla, medical officer at Gurgaon's municipal corporation.

Gurgaon, about 18 miles south of Delhi, is home to industrial plants and many global outsourcing firms.