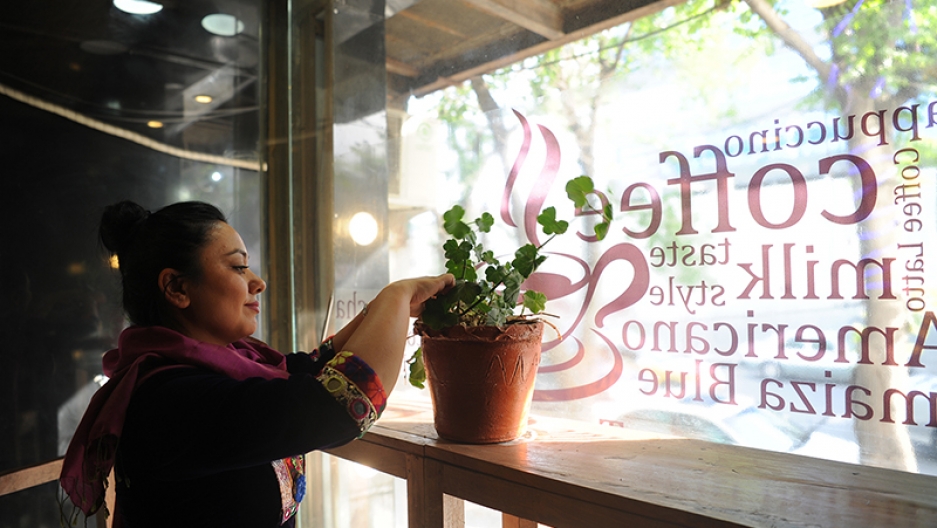 Nargis Azizshahy is the owner of ICafe in Kabul, Afghanistan.

When you walk into Nargis Azizshahy's shop on a busy street in Kabul, Afghanistan, the smell of freshly brewed coffee hits your nose immediately. Upbeat music plays in the background as clusters of young, Afghan men and women chat, nursing steaming cups of tea and coffee.

When Azizshahy opened this café two years ago, she wanted to create a space for young Afghans to hang out. She also wanted to bring a decent cup of joe to the neighborhood.

"One of my objectives for the coffee shop is to introduce coffee culture [to Afghans]," she said.

Things were going well for Azizshahy's business last spring. She was getting more and more customers, despite the constant road blockages, suicide attacks and insecurity.

But she said what would really help her business thrive is stability and security. There was little hope for that back in the spring. 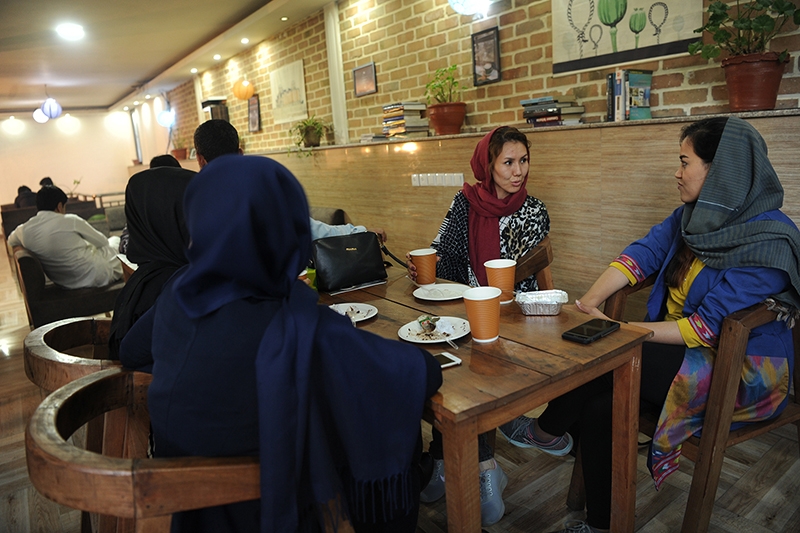 Young men and women enjoy an afternoon at the ICafe in Kabul, Afghanistan.

Fast-forward a few months, and there seems to be a glimmer of hope that opposing sides of the war in Afghanistan can come together and talk.

US President Donald Trump, who had initially dismissed talks with the Taliban, has shifted his views.

"There’s no talking to the Taliban," he said last January. "We’re going to finish what we have to finish. [...] There may be a time but it’s going to be a long time."

Last week, he boasted that the US "is in strong negotiations in Afghanistan."

Rubin, who's a senior fellow and associate director at the Center on International Cooperation at New York University, served as an adviser to the State Department and to the United Nations.

He said Trump doesn't typically pay any attention to what the intelligence community says, but in this case, it happened to fit with his own preconceptions, "which have been, for many years, that the war in Afghanistan is a waste of time and resources and that we [the US] should get out of there as quickly as possible."

So, Rubin added, "He [Trump] said, 'Enough of this. I'm not going to be running for president in 2020 with troops in Afghanistan. We have to have a plan to get out.'"

Suddenly, there was a push in Washington to get the warring sides in Afghanistan to come to a political settlement.

Related: After surviving an attack on their school in Kabul, these students show that ‘education prevails’

In September, Trump appointed Zalmay Khalilzad, former US ambassador to Afghanistan, Iraq and the United Nations, to lead the efforts. Khalilzad is tasked with convincing the Afghan government and the Taliban to come to the negotiating table — something that's been especially hard to achieve in the past.

But in the past few weeks, the Afghan government and the Taliban have been signaling that they’re interested in talking.

Taliban representatives met with State Department officials in Qatar, the small Persian Gulf country where the group has a political office. Afghan President Ashraf Ghani appointed a 12-member team that consists of men and women to represent his government in the negotiations. He also laid out a road map for talks with the Taliban. 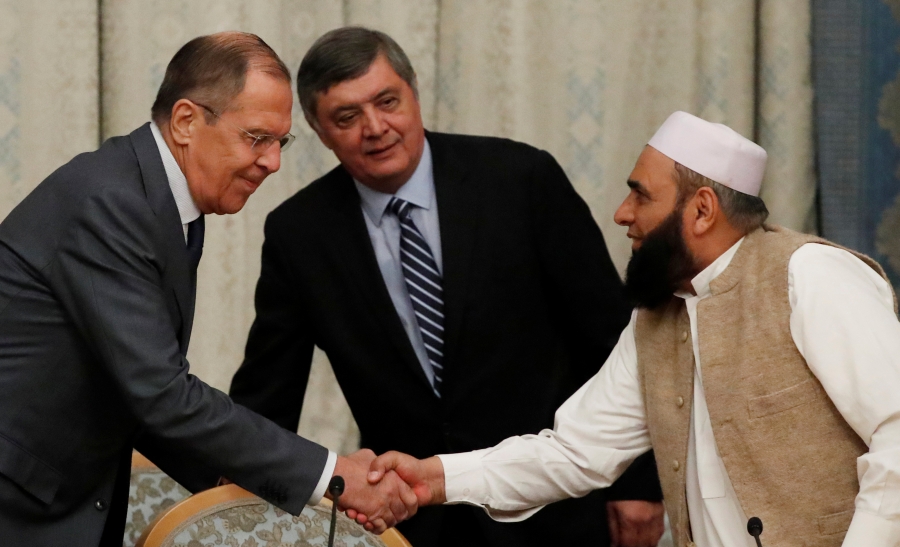 Meanwhile, other powers in the region have gotten involved.

Russia hosted talks with Taliban delegates and members of the Afghan High Peace Council in November. Representatives from Iran, China, Pakistan, Tajikistan, Uzbekistan and Turkmenistan were present, as well.

Asked about the United States' view on Russia's involvement in the talks, Rubin said that "the US recognizes that in order to get peace in Afghanistan, you need the cooperation of all of the neighboring countries."

So far, the Taliban and the Afghan government are not in direct talks. But all of this has created a sense of optimism and anxiety.

Nader Nadery is a former senior adviser to President Ghani and the chairman of the Independent Administrative Reform and Civil Service Commission of Afghanistan in Afghanistan. He has also served as a human rights commissioner.

After the US toppled the Taliban regime in 2001, Nadery participated in talks that led to a new government in Afghanistan.

He says looking back, that process felt rushed. There was a push to get an Afghan government up and running fast. He worries the same could happen again today with peace talks.

"If you rush in reaching to a conclusion and an agreement out of desperation that will not give us a sustainable peace," he said in a Skype call from Kabul.

Elections, freedom of press, women’s rights, education for girls — these are some of the hard-won achievements of the Afghan people after the Taliban fell, Nadery explains. The Taliban of the 1990s didn’t believe in any of that.

Related: She saved a pregnant woman’s life. Now, she works to make childbirth safer for all Afghan women.

"The Taliban cannot, on the one hand, say that they want to engage in peace; on the other hand, to emphasize on their version of Afghanistan that is not anymore," he added.

A recent study by The Asia Foundation found that the number of Afghans who believe that reconciliation between the Afghan government and the Taliban is possible has increased slightly since last year — or by 1.1 percentage points — to 53.5 percent today.

However, gender divisions remain, as "60.5 percent of males [...] believe that reconciliation is possible, but just 46.5 percent of females do.” 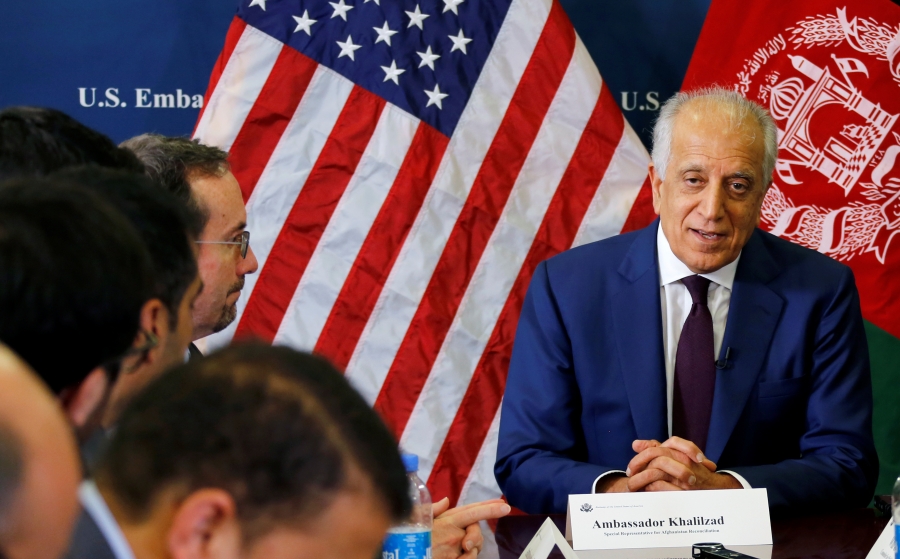 US special envoy for peace in Afghanistan, Zalmay Khalilzad, talks with local reporters at the US embassy in Kabul, Afghanistan, Nov. 18, 2018.

So, how does Nargis Azizshahy, the 28-year-old café owner in Kabul, see the push for peace negotiations?

"I would say yes, this is a time to make peace with the Taliban," she said over WhatsApp. "But I do have this afraid in my mind that what if the male-dominant society that Taliban had created … they follow that? Or what if they put some criteria that females cannot work outside their home?"

When the Taliban was in power, they did put severe restrictions on women. So, Azizshahy has reason to be worried.

At a recent peace conference in Geneva, Switzerland, President Ghani emphasized the role of women in the peace talks. He also said that safeguarding the rights of women is nonnegotiable.

"Let me be clear," he said. "Women's participation is of strategic importance to our country's national security and economic development. If there is any lingering question about whether the rights or opportunities of women will be given up, I can guarantee you that they will not be." 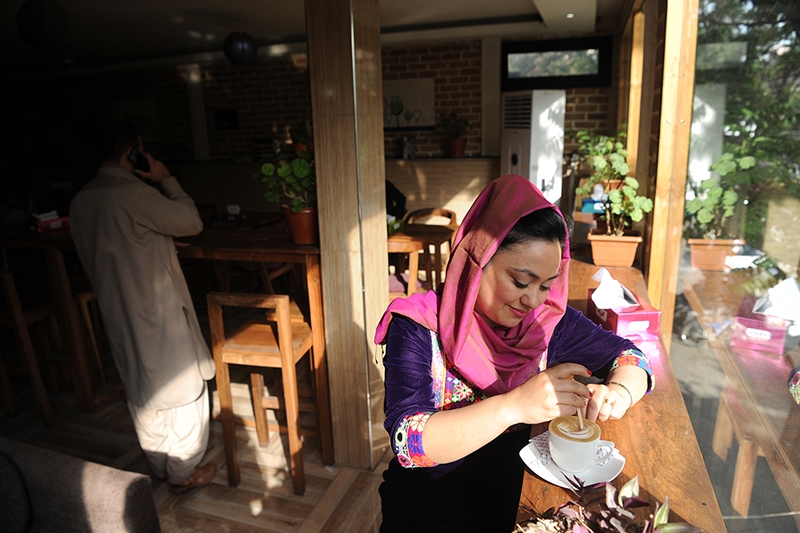 When Nargis Azizshahy opened ICafe in Kabul, Afghanistan, two years ago, she wanted to create a space for young Afghans to hang out — and to bring a decent cup of joe to the neighborhood.

Azizshahy said she follows the news about these talks but she also wants to stay focused on her business.

Since last spring, she has opened up a second café in Kabul. It’s the kind of place where you can grab lunch, sip coffee, play pool and read a book.

"We have a small library and for the fast food, we have Italian pizza," she said.

Azizshahy hopes that the Taliban, the US and the Afghan government can come up with a peace deal. Like many Afghans, she wants to see an end to the bloodshed.

But she also hopes that somewhere in the documents they sign, there’s a line that guarantees the rights of women like her.