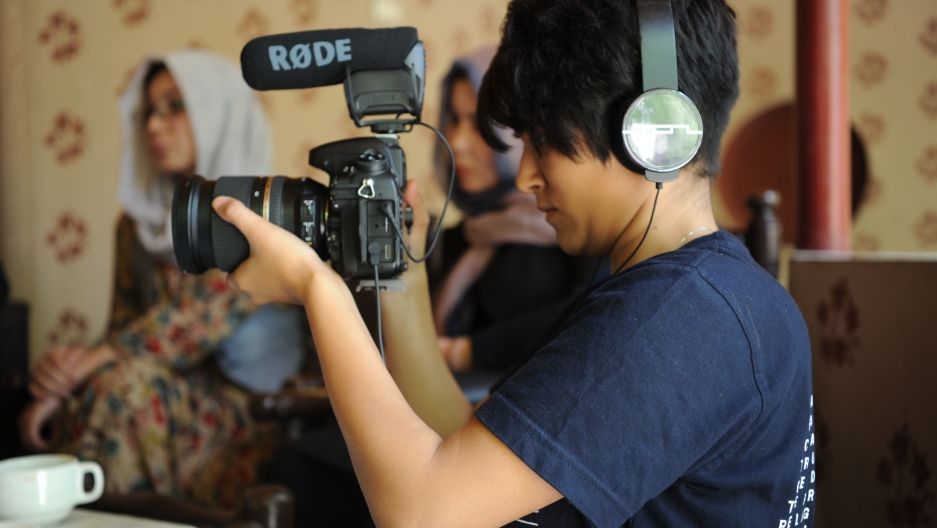 Sahar Fetrat is an Afghan documentary filmmaker and activist.

It takes a lot of courage to speak up in support of women and women’s rights in a male-dominated country like Afghanistan.

But that’s exactly what Sahar Fetrat did.

At an opening for a new bookstore in Kabul, the 22-year-old documentary filmmaker and women’s rights activist describes how she first got into filmmaking.

Read more in the "Untold Afghanistan" series: She saved a pregnant woman’s life. Now, she works to make childbirth safer for all Afghan women. and After surviving an attack on their school in Kabul, these students show that ‘education prevails’ and Today, women's clothing in Afghanistan includes far more than the blue burqa and Changing your face to disguise your ethnicity? Maybe, for these Afghan women.

She says her foray into activism began at 15, when she was assigned to shoot a video for a school project.

That was the first time she held a camera — a Philips camcorder.

Fetrat, who has short hair and an infectious grin, says that she and a group of her girlfriends were assigned to record their day-to-day lives.

"I think the image of Afghanistan and Afghan women has always been about oppression and victimhood and other issues which are really true. But what we did was, we showed all the things that we were enjoying living in Kabul."

What started as a school project later turned into a series of short documentaries for a filmmaking workshop. Over a year, Fetrat shot six videos, each about 10 minutes long. She called them Kabul Cards.

There's one shaky video where Fetrat is recording her friends as they try on clothes and put on makeup in a shopping mall. There is plenty of talking over each other, hugs and giggles. The video is titled, "We are just four young women having fun."

This is how Fetrat fell in love with filmmaking. At first, it was fun, something she would do with friends when they hung out.

But over time, she says, she realized that this piece of technology is powerful.

"For me, it was a really good realization that I can use [a] camera and storytelling to tell the stories of Afghan women."

So, she started to include social commentaries in her videos. One issue that got her fired her up was the street harassment she and her friends endured on a daily basis in Kabul.

In one of her videos, Fetrat asks a cab driver why he thinks men harass women on the streets.

“It’s their fault,” the driver responds. “When they dress immodestly, they trigger men."

Fetrat says she and her friends learned to use their cameras as weapons. The moment men catcalled them on the street, they would whip them out and start recording.

"We used to just hold the camera and tell them, ‘You’ll see yourself on TV,' and then they would be really scared. Some of them would apologize. But I think that experience showed me how empowering holding a camera and being able to tell the stories is."

Fetrat’s documentary about street harassment got a lot of attention in Afghanistan in 2013. So much, in fact, that she was invited to talk about it on national television. She was just 17 years old at the time.

In that program, when the host asks her to talk about her personal experience, she chokes up.

"Street harassment has taken a serious toll on my well-being," she explains. "As a young woman, I struggle with this every day.”

Five years later, Fetrat is a documentary filmmaker. And she refers to herself as a feminist. She dedicates the work that she does to her mother, who passed away last year.

"Whenever I think about feminism that I believe in, I think of my mother who, until the day she passed away — she didn’t even know what feminism means but I think the way she lived, the way she carried herself and the way she brought us up — showed me how many feminists were inside her."

This fall, Fetrat is off to Budapest, Hungary, where she begins a master's degree in gender studies.

She says that's something she has dreamed of since she was that 15-year-old girl with a flip camera in her hand.