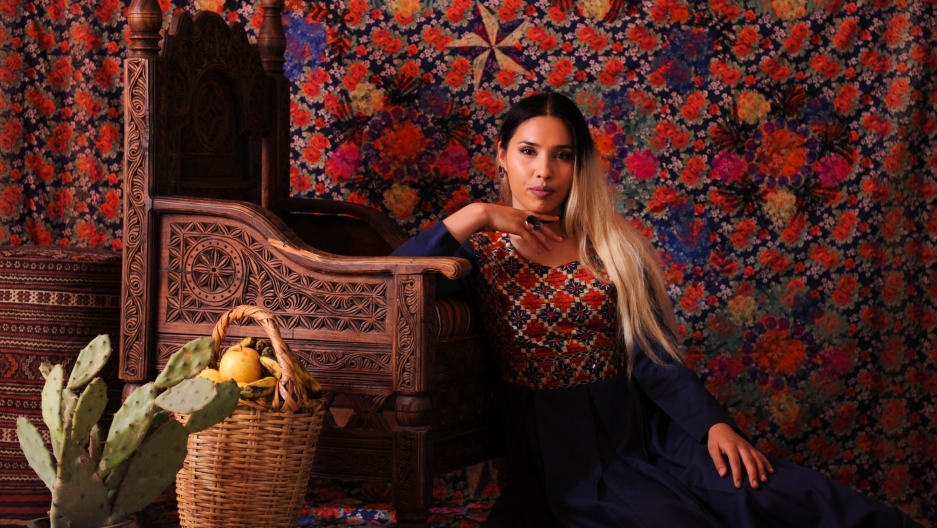 Twenty-eight-year-old Marzie Noori is a model in Afghanistan. She says her family was initially against her decision to become a model. "They were so strict," she says, "but I have always considered one thing in my life, and that's I will do whatever I like to do."

On a hot August day last year, President Donald Trump held a meeting with a group of his top military advisers at Camp David.

"What are we doing there?" he asked on Fox News in 2012. "We don’t have money. We’re a debt nation. We can’t build our own schools, and yet, we build schools in Afghanistan."

Read more in our "Untold Afghanistan" series: She saved a pregnant woman’s life. Now, she works to make childbirth safer for all Afghan women. and After surviving an attack on their school in Kabul, these students show that ‘education prevails.’

But on that day in August 2017, a photo reportedly influenced Trump's decision on sending in more troops.

"It was taken in 1972, and it was taken out from this book by a woman named Harriet Logan," explains Rafia Zakaria, attorney and author of "The Upstairs Wife: An Intimate History of Pakistan" and "Veil." "It showed Afghan women in heels and skirts just walking on a sidewalk in Kabul."

Zakaria says it was General H.R. McMaster, Trump’s then national security adviser, who pulled out the photo. His argument, she says, was this: "Look, Afghanistan had adopted Western values in the past. This could be Afghanistan again, if we send in more troops."

Following that meeting, the president authorized sending an additional 4,000 troops to Afghanistan.

Zakaria says this is a telling moment about how we look at women's clothing in Afghanistan.

"This is important because it represents this idea that if we can take Afghan women back to that moment or put them back in these miniskirts, the work in Afghanistan is done and the liberation is achieved. That's not the case."

Today, women's clothing in Afghanistan is far from the stereotypical blue burqa. Fashion designers are quietly working to give Afghan women more options when it comes to the way they dress.

Rahiba Rahimi is one of them. 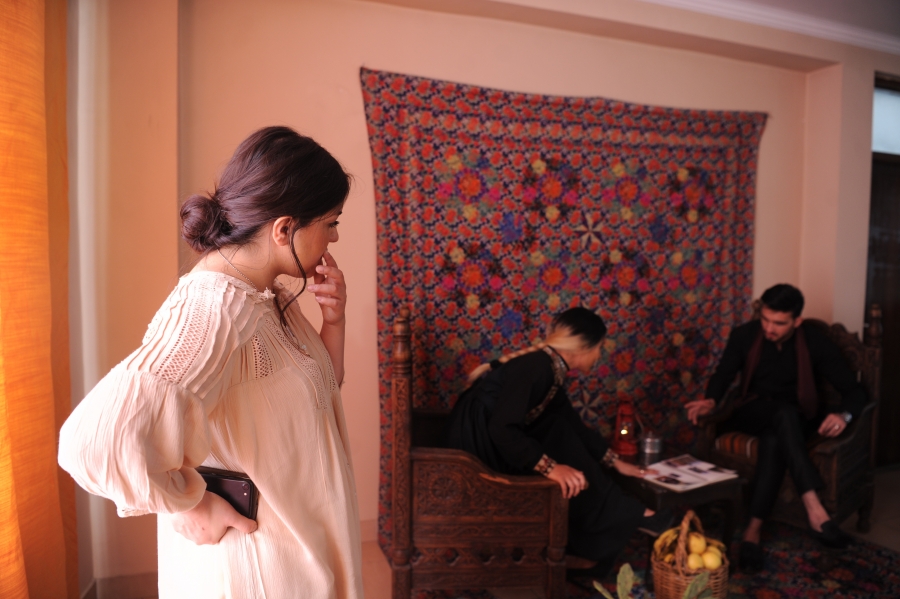 Fashion designer Rahiba Rahimi is at a photoshoot for her label, Laman.

I met Rahimi on a tense, spring morning in Kabul. There were more checkpoints than usual. Police everywhere. Few people walking around.

That’s because the day before, there was a suicide attack. Another one.

But all that seemed a world away at Rahimi's boutique, Laman, a Kabul-based fashion house. There, on the second floor of a nondescript building, a photo shoot was in full swing.

Two models, a young man and a woman, sat under bright lights, facing each other. The wall behind them was covered with colorful fabric.

The models looked longingly but awkwardly into each other’s eyes, trying hard to forget the strict social norms that forbid them from doing this. But it doesn’t last.

They both erupted in laughter. 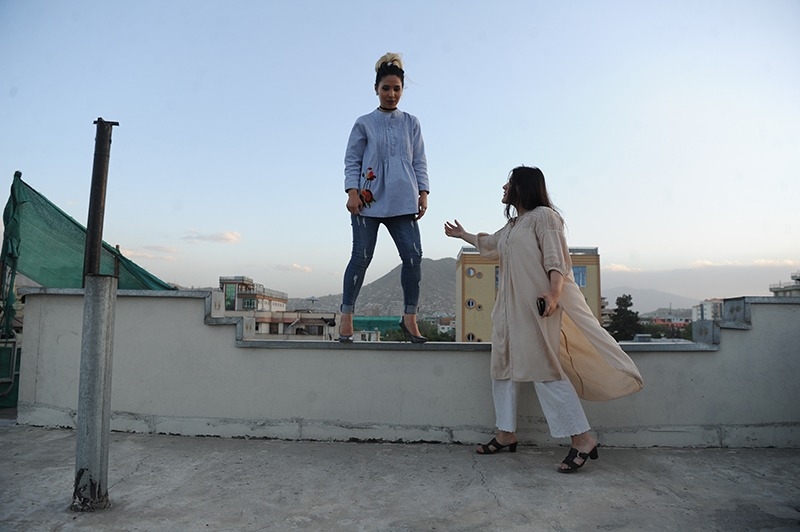 "It’s the first thing people see in you," she says. "A lot of judgment can come from how [we] dress. It can be a way of how Afghans can express themselves and who they are."

Rahimi says before she started Laman, she always thought the only way to change Afghanistan was to change its politics.

"There was a time in my life when I was very political," she says, "but then I realized change can start with what you wear."

The idea behind Laman is simple: Take colorful, traditional Afghan designs that already exist and turn them into practical, edgy streetwear.

"Afghan women have always enjoyed colors and different patterns and dresses," Rahimi says, "so it’s built in the culture, and it’s there." 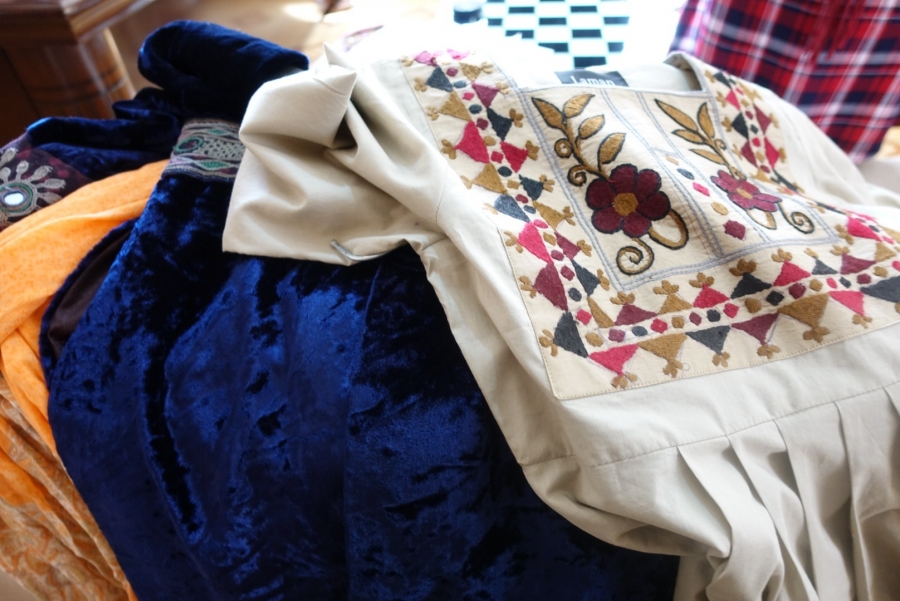 Rahimi shows me around her boutique. She picks out a long, cream-colored dress from one of the racks. There are intricate burgundy flowers embroidered on the waist.

It’s a very traditional look but it’s done in a very modernish dress. This one would be around 3,000 Afghanis, about $40.

That might sound like a steal but that’s how much most Afghans earn in a month. Rahmini knows her designs are too expensive for a lot of women here.

But the design house employs local women to do the embroidery. The women can work from home — which Rahimi says is crucial since some conservative families don't allow women to work outside the home.

Rahimi says Laman has shaken up the fashion scene here.

"The first time we had a red carpet [event] and we had models with funky makeup and kind of crazy clothes, a lot of people stood up and criticized us," she says. "I was really scared because I didn't know what’s going to happen because this can be threatening."

It can be threatening because the Taliban still has a presence in Afghanistan. The group sees these types of women's clothing as un-Islamic.

Lately, ISIS has also staged attacks in Afghanistan, adding to the insecurity and violence. Rahimi says on days when there is a high threat level, she asks her employees to stay home.

Rahimi, though, thinks that Afghanistan is ready for young, ambitious women like her. Traditional mindsets are beginning to transform into more acceptance. The near future may well bring more change. 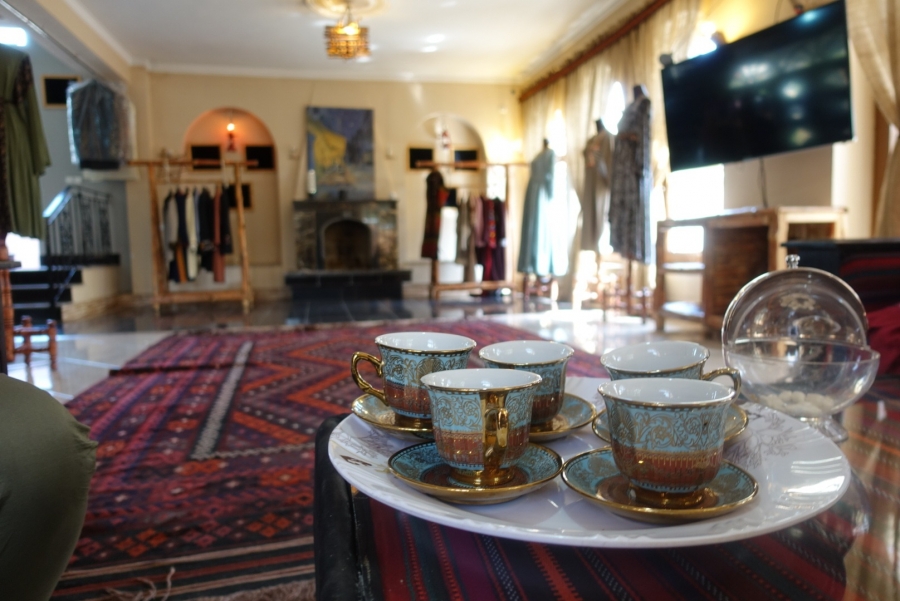 This is a snapshot of the Laman fashion studio in Kabul, Afghanistan.

Author Zakaria believes that what young designers like Rahimi are doing is challenging but critical. She says some might wonder why they focus on fashion at a time when there are so many problems in Afghanistan. What about poverty, illiteracy, corruption or lack of basic services, they might ask.

But she thinks fashion and creativity is just as important as solving these issues.

"Fashion is an expression of identity," she says. "These designers are creating a popular representation that can be seen on the streets. They are showing the world what they think the future should be like."

"Culture, history, all of these forces do not stop and they do not die just because there’s war," says Zakaria.

But not in Kabul.

Rahimi walks me out of her boutique. I say goodbye to her and the armed guard who stands at the door. He closes the heavy metal gates behind me.