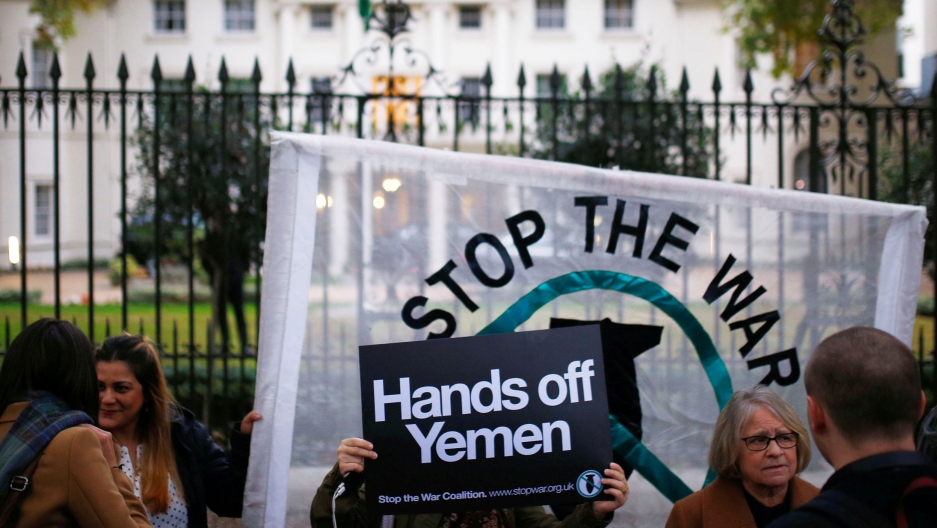 Demonstrators from the Stop The War Coalition stage a protest against the killing of journalist Jamal Khashoggi, war in Yemen and UK arms sales to Saudi Arabia outside the Saudi Arabian Embassy in London, Oct. 25, 2018.

The Senate may try this week to get the US to pull out of the Yemen war.

SJ Res 54, a resolution sponsored by Democrat Bernie Sanders of Vermont and Republican Senator Mike Lee of Utah, would "direct the removal of United States Armed Forces from hostilities in the Republic of Yemen that have not been authorized by Congress."

Since March 2015, the US has provided logistical support, targeting intelligence and, until recently, fuel for Saudi warplanes that have been bombing the Houthi rebels who took over much of Yemen and still control the nation's capital.

This is the second time Sanders and Lee have sought passage of the bill that would require US President Donald Trump to seek Congressional approval before continuing US support for the Saudi war effort.

"It's not clear yet whether the votes are there to pass this," said Democratic Sen. Jeanne Shaheen of New Hampshire. "There was a similar resolution that came forward a couple of months ago that didn't have the votes to pass. I supported that because I thought it was important for us to send a message to Saudi Arabia."

Shaheen told The World that the Sanders-Lee bill, as well as new legislation she has co-sponsored, are designed to send a message to Saudi Arabia and to the White House.

"Whenever the United States doesn't stand up for our values, doesn't stand up for human rights — whenever we allow humanitarian disasters to occur without taking as much action as we should, my constituents are concerned, as I think people across this country are," Shaheen said. "We heard this week from a number of humanitarian groups that are doing work in Yemen who have called on the United States to stop supporting the Saudi coalition. They see the impact of what's happening there. And we have got to call attention to this and do more."

The UN estimate of war deaths is 10,000. It was last reported in 2015. Independent estimates put the death toll between 40,000 and 50,000. There is also pressure for the US to suspend arms sales to Saudi Arabia in the wake of the murder of journalist Jamal Khashoggi. Trump has told reporters that ending sales would hurt American jobs.

"And since it's very clear that the President of the United States is not going to do more, Congress needs to step up," Shaheen said.