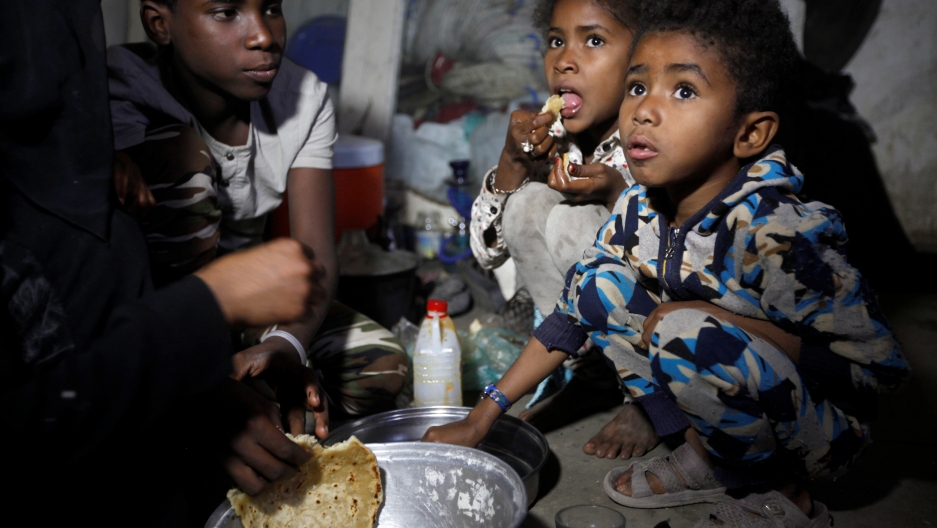 Children displaced from the Red Sea port city of Hodeidah have a meal in a shelter in Sanaa, Yemen, on Nov. 1, 2018.

US Secretary of Defense Jim Mattis drew praise for demanding an end to the fighting in Yemen — within 30 days.

“We've admired this problem for long enough down there and I believe that the Saudis and the Emirates are ready,” he told a crowd in Washington on Oct. 30.

Two days later, Saudi- and Emirati-backed forces launched an organized assault on the Houthi rebel-held port city of Hodeidah. This was probably not what Secretary Mattis had in mind.

“The situation continued to deteriorate and with the offensive at Hodeidah, there are almost 600,000 people in the city,” says Hisham Al-Omeisy, a Yemeni commentator now living in exile. “You have people caught between the Saudi-led coalition and Yemeni [government] forces on one side — and the Houthis on the other side.”

As General Mattis’s 30 days wore on, fighting in Hodeidah only intensified, and humanitarian groups urged Washington to reign in the Saudis and Emiratis.

Un spite of all our warnings the final attack on Hodeida is on. It will break the lifeline to millions and make the catastrophe complete for Yemeni civilians. US, UK & France must act to stop the Saudi led coalition. Iran must act on Sana’a authorities. https://t.co/UOkuy5tvjq

Early this week, prospects for Yemen seemed to improve. Saudi Arabia agreed Tuesday to evacuate 50 wounded Houthi fighters, something the rebels had requested on the eve of the last planned negotiation in September. On Thursday, the Saudi-led coalition announced that it was halting its offensive on Hodeidah.

House Republicans this week scuttled a resolution co-sponsored by McGovern that would have required a debate about US support for Saudi-led military activities in Yemen.

"One of the things we wanted to do was to go on record saying we don't want the United States to be complicit in any of this," McGovern says. "We want to stop the sale of arms to the Saudi government, we want to stop any intelligence-sharing or any role we play that might aid [the Saudis] in their attacks on Yemen. That, to me, was a timely debate. We should have had it.”

Omeisy is not sure how much help politicians in Washington can provide.

“To be honest with you, there's a lot of political jousting when it comes to Yemen," he says. "I mean, I'll be blunt here. [In the] US Congress, in the UK even at the EU, these are political maneuvers that have more to do with their domestic politics than with Yemen. So we don't expect much.”

But McGovern is not likely to give up. Almost since the war began, he has been sounding the alarm about the impact of US weapons on Yemeni civilians.

“It should weigh on the conscience of everybody on this planet, and raise people's voices to demand that this come to an end,” he says.

By midday Friday, the ceasefire in Hodeidah, if there had been one, was not holding.

"The Houthis did not expect the [Saudi-backed] offensive," Omeisy wrote in a WhatsApp message. "The move put them in a corner."

Omeisy is not holding out hope for a lasting ceasefire or even talks between warring sides anytime soon. “Even if tomorrow they announce a peace deal, the war between the Houthis and the Saudi-led coalition would stop. But the internal war between the various factions [across Yemen] will take years and years.”