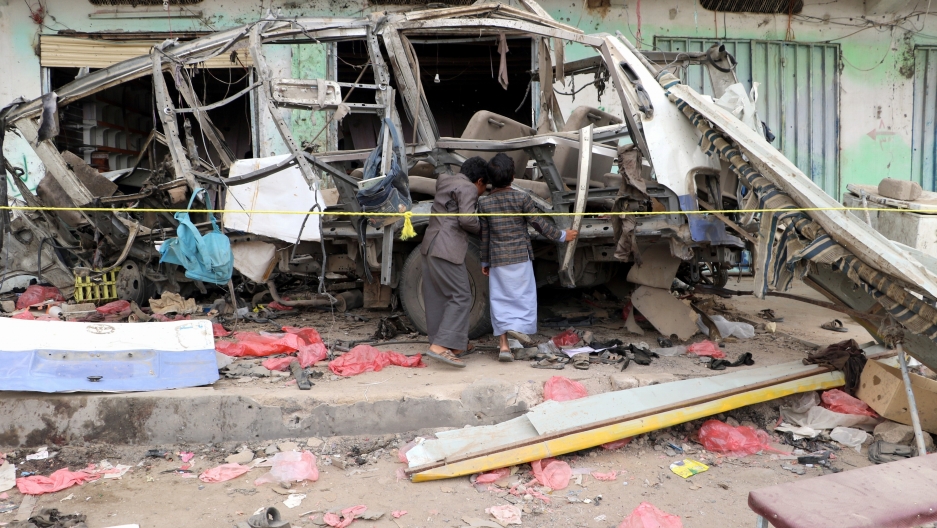 Boys inspect the wreckage of a bus at the scene of Thursday's air strike in Saada province, Yemen, on Aug. 10, 2018.

At least 30 children were among the people killed Thursday when their bus was struck by a missile fired from a warplane in northern Yemen. While authorities vow to investigate, Yemenis are drawing their own conclusions.

The bus, parked at a busy market in Saada in northern Yemen, was filled with boys returning to school following a picnic outing. Yemeni social media lit up with reports of civilian deaths.

On Thursday, Saudi state media was announcing a successful strike in Saada on the Yemeni rebels known as the Houthis. Col. Turki al-Maliki, a spokesperson for the coalition of neighboring Arab countries trying to defeat the Houthis, said that the day's attacks were retaliation for a Houthi missile fired Wednesday into Saudi Arabia.

“Today's attack in Saada was a legitimate military operation," Maliki said Thursday, "and was carried out in accordance with international humanitarian law.”

An Emirati site quoted Maliki also saying that the coalition "targeted the Houthi militia members who were inside the bus and said that they were the planners and operators of the missiles launch pads."

"[A spokesman for the armed forces] in Saudi Arabia and the coalition said that that bus used to hold lots of terrorists," says Sanaa resident Ismael Mohammed. "And it was a target [for] missiles of the coalition. But sadly," he says, "all the terrorists were just kids."

This video, said to be taken just after the airstrike, was shared by Yemenis via WhatsApp on Thursday afternoon. In it, a Yemeni man is wailing and screaming as he looks into the back of a pickup truck. He reaches under a blue tarp, and from a tangle of human bodies he pulls up the limp arm of a child.

PRI could not authenticate the video, but footage showing the wreckage of the bus and the same people, wearing the same clothes, indicate that it was photographed on Thursday.

"I'm really still in shock," said Faizah Al-Sulimani, a Yemeni activist who saw the video told us via WhatsApp. "I couldn't sleep the whole night."

She says watching the video shook her up badly.

"I cannot explain my feeling when I saw all these dead bodies of children on the truck," Al-Sulimani says, "and some parents just saw their children, dead."

Connecticut Sen. Chris Murphy, a member of the Senate Foreign Relations Committee and a harsh critic of Saudi conduct in Yemen, saw the attack as an opportunity to highlight the American role in the Yemen war.

And we just bombed a SCHOOL BUS.

The Saudi/UAE/U.S. bombing campaign is getting more reckless, killing more civilians, and strengthening terrorists inside Yemen. We need to end this - NOW. https://t.co/P8V2L6Crgi

Murphy is one of a growing number of US legislators concerned that the United States may be culpable for war crimes committed by its customers and allies in the coalition.

The Saudi Embassy in Washington said Friday that the coalition is launching its own investigation. A Saudi official wrote, "the coalition has referred this immediately to the Joint Incident Assessment Team (JIAT) for investigation, and to conduct their assessment of the procedures and conditions of said operation, announce the results expeditiously."

This will not be the first such internal investigation by the coalition. Last year it examined 15 separate reports of civilian casualties, clearing itself of wrongdoing in all but three. In July, Saudi King Salman indemnified Saudi pilots from punishment for possible war crimes in the Yemen war.

The UN Security Council, also on Friday, called for a "credible and transparent" investigation after receiving a closed-door briefing on the strike by a senior UN official. It did not, however, authorize its own independent investigation. The UK, the US and France — all UNSC members — are among the weapons makers who supply the Saudi-led coalition with the bombs that have been used in the Yemen operation since its beginning in 2015.

Even before the Saudi investigation begins, Yemenis have begun to post pictures of evidence they say comes from the scene of the attack.

This tweet, from respected Yemeni journalist Nasser Arrabyee, shows part of a 500-pound MK-82 bomb. It is manufactured in the United States and sold in large numbers to both Saudi Arabia and the United Arab Emirates.

The remnants of the US bombs that killed Yemen children in the latest US-Saudi massare and war crime of August 9th, 2018

For nearly four years, Yemenis have been subject to harsh rule by the Houthi rebels and to unrelenting air strikes by the Saudi-led coalition.

A new effort by the United Nations aims to bring all parties in the Yemen war into dialogue.

"It is really a stream of blood happening every day," he says. "Time to say no for war."