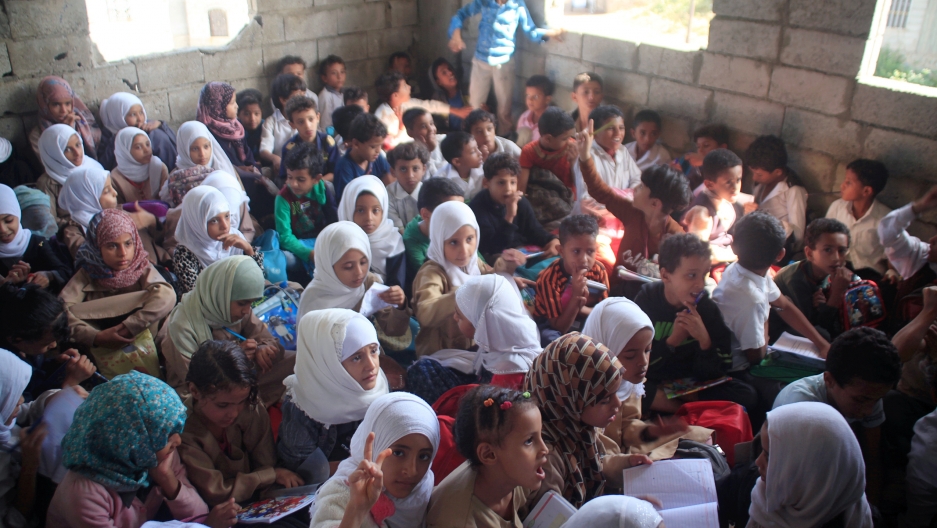 Students attend a class at the teacher's house, who turned it into a makeshift free school that hosts 700 students, in Taiz, Yemen Oct. 18, 2018.

US Secretary of Defense Jim Mattis made history Tuesday night. For the first time in the four-year history of Yemen’s civil war, a US official had set a deadline for peace negotiations.

“Thirty days from now, we want to see everybody around a peace table,” the secretary said. But the deadline could be as much distraction as diplomacy.

“I think a lot of people are looking at this call and placing it largely in the context of the murder of Jamal Khashoggi and the need for the US to demonstrate that it's applying pressure to the Saudis,” says Peter Salisbury, a senior consulting fellow at London's Chatham House and a consultant to International Crisis Group.

A reality check from Yezid Sayigh: Not only will MBS survive the Khashoggi killing, he will also use the backlash to entrench himself further domestically. https://t.co/hUHR7rkANK

”When you dig into it a little bit, there is no cumulative consequence for not getting to peace,” Salisbury notes, “so we really have an announcement that the US wants these peace talks to go ahead within the next month.” But while Mattis called on all sides in the conflict — singling out the Houthi rebels, who control the Yemeni capital, plus US clients Saudi Arabia and the United Arab Emirates  — to come to meet in Sweden, he has not said what will happen should they fail to participate.

The last time the warring parties were scheduled to meet, in September in Geneva, the Houthis did not show up.

The World asked Defense Department officials to clarify whether there would be consequences should parties refuse to meet this time. Pentagon spokesperson Cmdr. Rebecca Rebarich replied by email, “Our statement is intended to emphasize the needed focus on political efforts in Yemen. Only a negotiated political agreement can secure the region and end Yemen’s humanitarian crisis.” 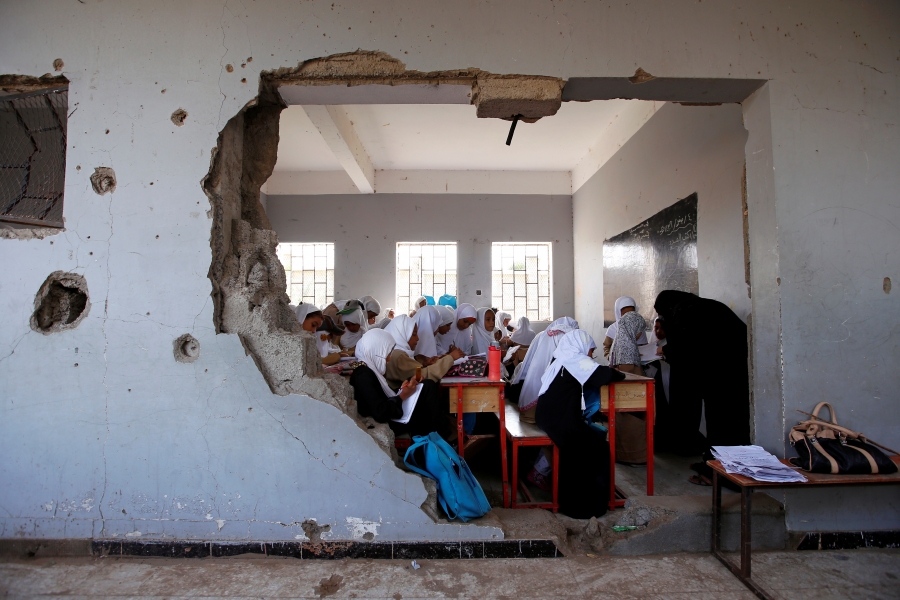 Girls attend a class at their school, damaged by a recent Saudi-led air strike, in the Red Sea port city of Hodeidah, Yemen Oct. 24, 2017.

After four years of civil war, much of Yemen’s infrastucture has been destroyed, its economy is in free fall, and many of its people do not have enough food to eat.

The effect can be seen in the Red Sea port city of Hodeidah, where fighting intensified in June this year. Forces allied with the exiled president of Yemen began to attack Houthi positions around Hodeidah in a campaign to take control of the seaport.

“Since the last five months, more than 700,000 people have evacuated from the city,” says Muhammed Zulqarnain Baloch, country director for Islamic Relief Worldwide in Yemen. “Those who are still staying back in the town, they're facing different challenges of safety and security. Every night there are airstrikes, heavy artillery gunfire and shelling. People are noticeably on edge, and the streets are completely empty by 7 at night. Most shops and hotels and restaurants are closed. Some markets are still functional, but the owners of those shops and markets are reluctant to restock because of the currency collapse.”

"Yemen need a ceasefire today - not tomorrow, next week or next month" - our CEO @NaserHaghamed responds to US calls for a ceasefire in 30 day. Contact +447760221890 to arrange an interview https://t.co/RfBUeKVLle pic.twitter.com/Y5Qn1r6L3E

Baloch says that because of uncontrolled inflation, most Yemenis can't afford food and fuel. They turn to groups such as Islamic Relief and the World Food Program to meet basic needs.

But this isn't new. Yemen was the poorest country on the Arabian peninsula before the current war erupted. Ground fighting and airstrikes, a sea and air embargo and the collapse of its central bank have made Yemen what the UN calls “the worst humanitarian crisis on Earth.”

And until now, the US has not used its influence over the exiled Yemeni government, Saudi Arabia or the UAE to demand that they reign in their forces or inititiate confidence-building measures that the UN has frequently called for, such as a cessation of bombing, prisoner swaps, or an opening of the airport in Houthi-held Sanaa.

“Mattis, in public and private, has been telling people that the Yemen war needs to end, for strategic reasons, for reasons of moral conscience,” says Salisbury. “But Yemen's problem has always been — and always will be, I think — that it simply isn't high enough on the list of priorities for the US and other Western states to expend political capital to make life better there for the average Yemeni. I don't really see any shift in that.”

Nonetheless, a ceasefire would be welcome. A peace deal would be welcome. But, says Baloch, peace alone will not be enough to put Yemen back together again. “Even if the war stops now — like, today — it will take 10 years to come back to the same situation [Yemen was in] before the war.”