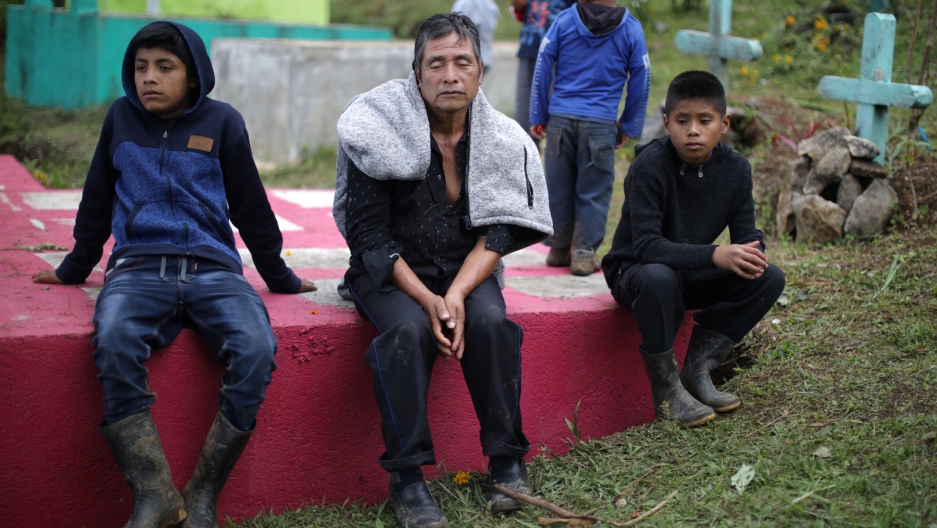 Miguel Paiz Domingo, 59, (center), father of Misael Paiz, 25, sits near Paiz's grave at his funeral in Aguacate, Huehuetenango, Guatemala, Oct. 29, 2018. Paiz died in the Sonoran Desert after traveling over 2,000 miles to cross the US-Mexico border. Border Patrol agents searched for Paiz after his uncle called 911, but were unable to find him before he died.

The 911 emergency call came into the US Border Patrol's Tucson station around midnight.

Joselino Gomez Esteban's voice crackled through an older cell phone from somewhere in Arizona's Sonoran Desert, the final stretch of a 2,000-mile migration from Guatemala.

Gomez said he was lost. He needed help. His nephew had collapsed, wouldn't respond.

Each year hundreds of migrants die trying to cross into the United States from Mexico. Thousands more need rescuing. The Border Patrol tallied 294 deaths in fiscal year 2017, the last year for which data is available. But experts believe the actual figure is far higher. Some who die are never found.

A quarter of those known deaths — 72 people — came in the Tucson border sector, where summer temperatures routinely hit triple digits. Between October 2017 and October 2018, the Tucson Border Patrol launched 923 rescue operations, a 22 percent rise from a year before, according to an agency official. 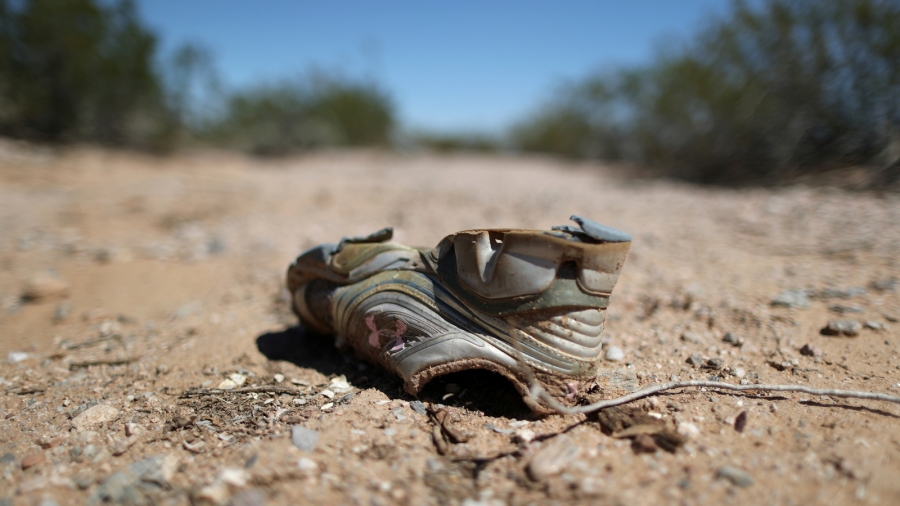 A shoe likely left by a migrant crossing the desert is seen in Pima County, Arizona, Sept. 12, 2018.

Finding Gomez, 43, and his nephew, Misael Paiz, 25, would prove difficult. The cell phone Gomez used did not provide his GPS coordinates. Using the cell phone towers that transmitted the 911 emergency call did little to help; the signal had bounced off towers up to 100 miles away.

Headquartered in a modern two-story brown brick building, the Tucson Border Patrol sector is responsible for 262 miles of sweeping desert, canyons and cactus-studded hills. Gomez and Paiz could have been anywhere in this territory. Agents were not even certain they were on the US side of the border.

The sector has a staff of 4,200 at its disposal, backed by helicopters and unarmed drones, with technology ranging from motion and image sensors to cameras able to spot migrants from seven miles away. It is one of the busiest sectors on the border for apprehensions and rescues of illegal migrants as well as seizures of marijuana. More than twice a day, on average, agents launch rescue missions.

At times, rescues turn to recovery efforts. Deaths come mostly from heat stroke in summer, hypothermia in winter. The dead are taken to the Pima County medical examiner's office.

“We see this day in and day out,” said Greg Hess, the county's chief medical examiner.

Sometimes only bones are recovered; sometimes identifications are impossible. When they can, the office arranges for the return of remains to family members back home.

Two weeks earlier, Gomez and Paiz had set off from Aguacate, a struggling Guatemalan farming town of 1,500 people near the Mexican border. The following account is based on more than two dozen interviews with family members, government officials, border patrol agents and human rights workers.

Paiz, a restaurant cook who had worked in Mexico, hoped to find work in the United States and send money back home. His uncle, Gomez, planned to join his wife and three children in South Carolina. He had been deported two years earlier and tried and failed three times since to make it back. This would be his fourth attempt.

"The family is disintegrating because here we don’t have work," said Paiz's father, Miguel Domingo Paiz, 59.

Domingo knows that leaving for a better future is a life-or-death gamble. His eldest son Ovidio was shot dead in Mexico last year after moving there to find a job. 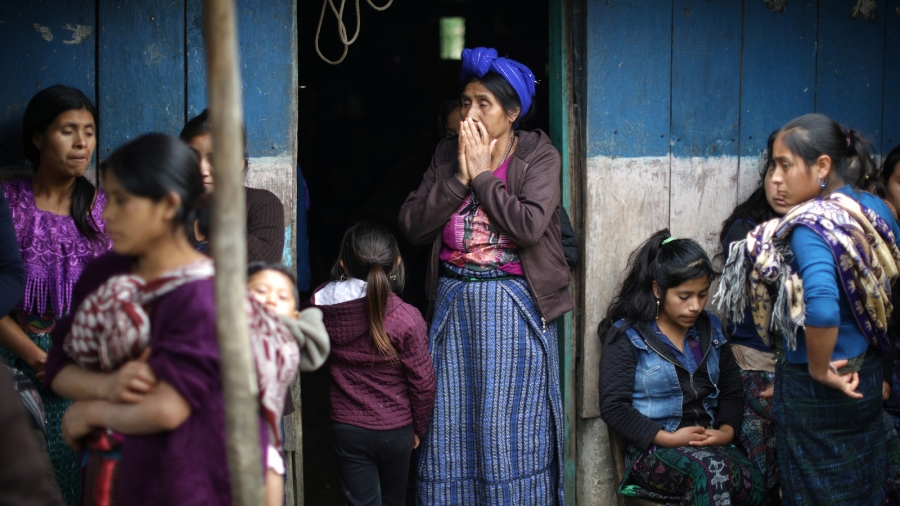 A woman stands in the doorway of the family home of Misael Paiz, 25, before his funeral in Aguacate, Huehuetenango, Guatemala, Oct. 29, 2018.

In recent years, the number of Guatemalans caught crossing illegally into the United States has risen steadily from about 57,000 in 2015 to nearly 117,000 in 2018, and is second only to apprehensions of Mexicans. The figures, experts say, reflect a greater willingness among Guatemalans to brave the perils of migration to escape rising violence, poverty and political turmoil.

Paiz told his twin brother, Gaspar, that he made an initial payment of $500 to a smuggler — known as a "coyote" — who promised to get him across the border. He would owe another $5,500 if he made it.

After making their way to the Mexican town of Sasabe on the border with Arizona, Paiz and Gomez waited 12 days for their turn to cross with a guide, according to family members.

In one of their last phone conversations, Paiz told his father: "Soon it will be my turn."

After crossing and walking for about six hours, Paiz began to complain of a severe headache. He collapsed next to a dirt track called Cemetery Road.

Their guide poured water over Paiz's head. When that didn't help, he took off with three other migrants in their group. Gomez stayed with his nephew.

Gomez's efforts to revive his nephew failed. He called family members in Aguacate, told Paiz's mother to pray. Then, knowing it would mean another failed attempt to rejoin his family, Gomez placed the 911 call.

At first light on Sept. 10, helicopters launched by US Customs and Border Protection and Pima County started scouring known migrant paths in the area. An elite Border Patrol medical unit set out across the desert.

Following the 911 dispatcher's instructions, Gomez lit a fire in the hope that it could guide the rescuers. But it burned hot and clean, producing little smoke.

It wasn't until 1:30 that afternoon that agents got word that a rancher had happened across the two men.

A short while later, Border Patrol agents reached the location and took Gomez into custody.

They took Paiz away in a black body bag. 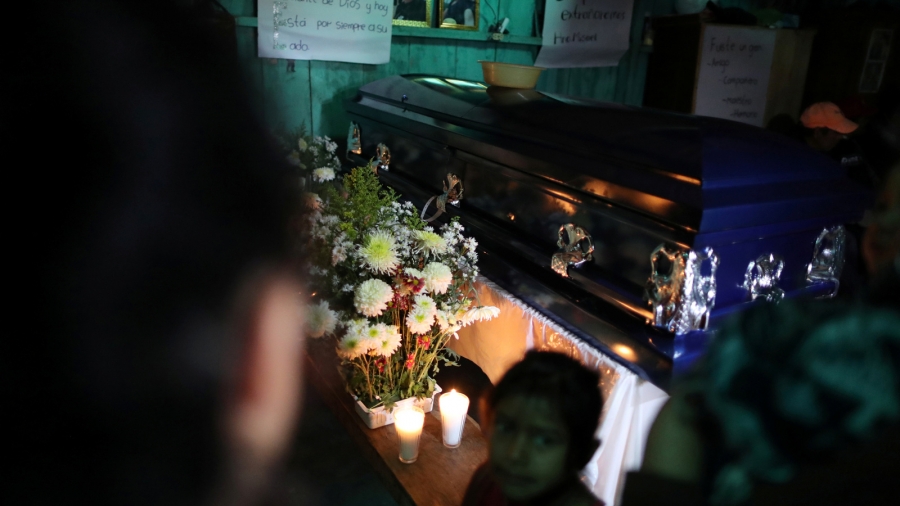 The coffin of Misael Paiz, 25, lies inside his family home before his funeral in Aguacate, Huehuetenango, Guatemala, Oct. 29, 2018.

Related: Some migrants are rethinking the US as their ultimate destination

The Pima County Medical Examiner would later determine Paiz succumbed to heat stroke. Seven weeks after his death, Paiz's body was flown to Guatemala City, a journey paid for by the Guatemalan government. His coffin arrived along with a half dozen others, all bearing remains of Guatemalan migrants.

A Red Cross ambulance transported Paiz's body on the 12-hour drive along primitive roads from the capital to Aguacate. His family followed behind in a bus.

"We always played together. We would go to the mountains together to collect wood," said Gaspar, his twin. "We discussed which one of us would go to the US and decided it would be Misael."

In Aguacate, some 250 people met the ambulance transporting Paiz's body. They stood in ankle-deep mud and pouring rain as eight men lifted his coffin out and took it into the family home. 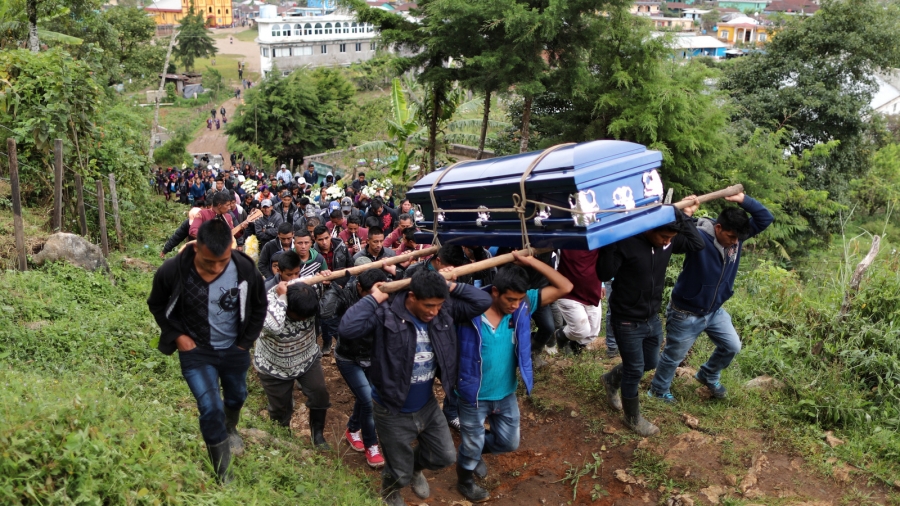 Pallbearers carry the coffin of Misael Paiz, 25, to his funeral in Aguacate, Huehuetenango, Guatemala, Oct. 29, 2018. Paiz died in the Sonoran Desert after traveling over 2,000 miles to cross the US-Mexico border. Border Patrol agents searched for Paiz after his uncle called 911 but were unable to find him before he died.

For hours, Paiz's mother, brothers and sisters wailed while others sang in a room illuminated by a single electric bulb hanging from the ceiling.

The following morning, a band played marimba music next to the coffin in Paiz's family home. A woman cooked a pot of stew on a wood-burning stove.

Paiz was buried that afternoon in a concrete tomb on a hillside, next to his elder brother Ovidio.