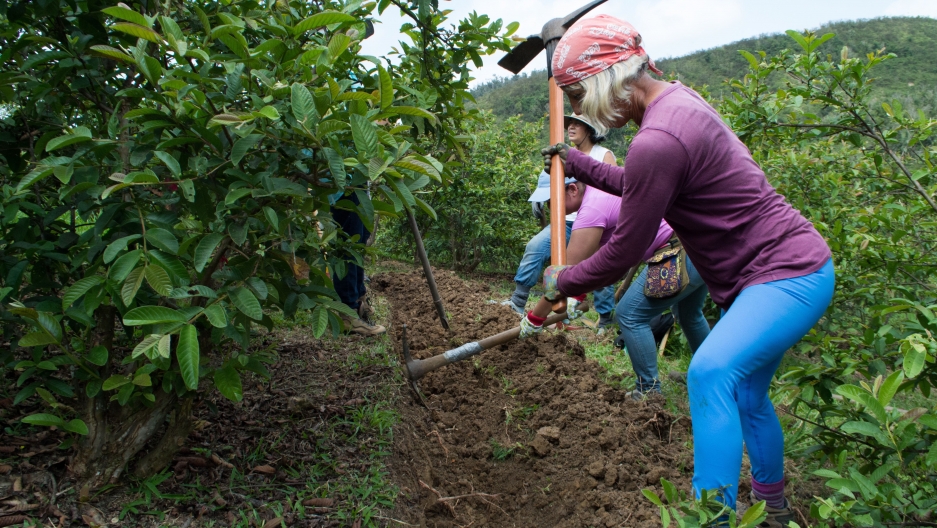 High in the mountains of Puerto Rico, a group of women struggles to keep their balance as they drive pickaxes deep into the earth of a hillside guava orchard. They’re digging a narrow trench called a swale on the steep terrain of this 7-acre farm.

It’s a low-cost, low-impact way to retain rain water and reduce erosion in a place where both can be a challenge.

With a swale “you end up storing most of your water in the soil itself, so the plants can access it whenever they need it,” said Daniella Rodríguez Besosa, who has her own farm nearby. Besosa is part of a group called the Circuito Agroecológico Aiboniteño — all farmers, mostly women — who’ve been working together since Hurricane Maria hit Puerto Rico in 2017 to help each other’s farms recover and become more sustainable.

Maria “was an eye-opener for a lot of people,” Besosa said. “It was also a call to action. Nobody else is going to help us; we need to help ourselves.”

Farms in Puerto Rico were devastated during Hurricane Maria. It’s been estimated that 80 percent of the crops on the island were destroyed, and $1.8 billion of damage was done to agricultural infrastructure.

“The best part from this hurricane crisis was this, that we get to organize to help each other recover,” said Janette Gavillan, the owner of the guava orchard the Circuito is working on.

Related: In a Puerto Rico neighborhood still waiting for power, this community kitchen is like ‘therapy’ 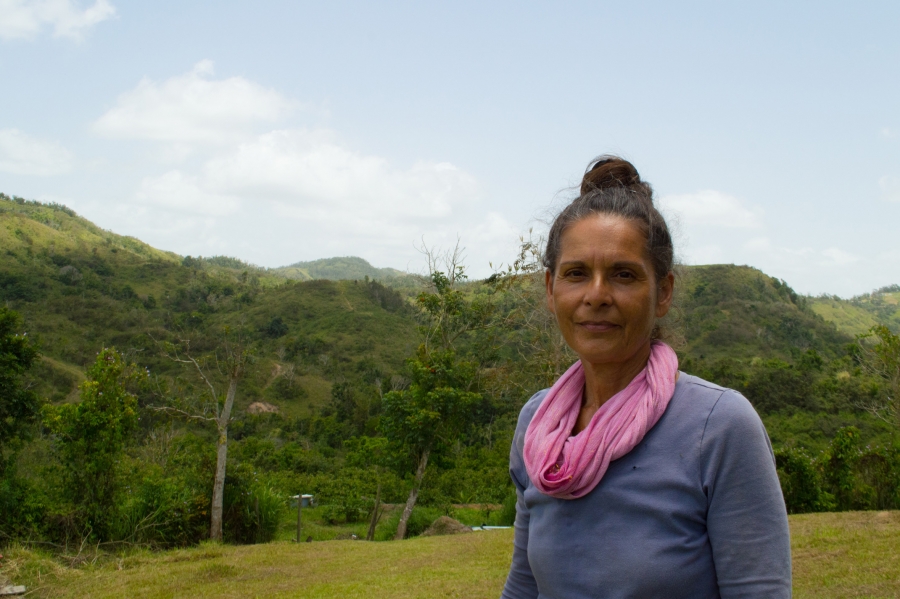 Janette Gavillan says the collective effort is helping prepare her small farm to stand up better to future storms.

Gavillan is a retired chemistry professor and is relatively new to farming. But she says working with the Circuito has taught her ways to be more sustainable.

“I’m getting ready this time, not for [another] hurricane [but] for the farm, for the benefit of the whole ecosystem,” Gavillan said.

Since Maria, the Circuito’s members have come to see sustainability as synonymous with resilience and independence. They hope that if they’re able to rely only on themselves, they’ll be better prepared for the next big storm, or at least be better able to recover.

There’s science to back up that hope. When researchers from the US, Colombia and Germany studied farm damage after extreme weather events like hurricanes, they found that diversified, small farms suffer less damage than large, single-crop farms.

Related: It may be getting harder for Puerto Rico’s national forest to recover from storms

A few miles from Gavillan’s farm, Jessica Collazo works a small plot dotted with baby chicks and thin beds of fruits and vegetables. The plateau on which it sits drops off and disappears as if swallowed by the valley below, giving Collazo a panoramic view of what looks like a mountain paradise beyond.

After Maria, though, things weren’t so serene. Collazo and her husband support their family by selling their produce at local markets, but she says after Maria, they had to start from zero. 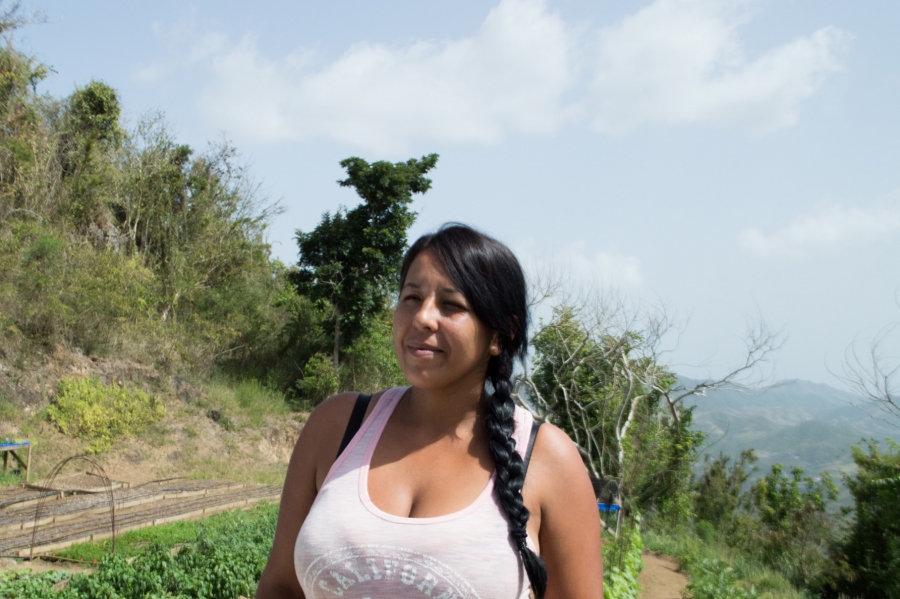 Jessica Collazo says the brigade of local farmers helped the small farm she runs with her husband recover after the family was “left with nothing” after Hurricane Maria.

“We were left with nothing,” Collazo said. The storm washed her crops, seeds and soil over the side of the mountain.

The brigade of local farmers helped her clear fallen trees and get new seeds. Circuito members also built banks on the edges of the mountain and dug swales that Collazo hopes will reduce the damage from the next hurricane.

“On my own, that would take me months,” Collazo said. “But with help, it took only a few hours.”

Collazo hopes the expertise and extra hands of the Circuito members will help her family reach its goal of building a completely self-sustaining farm. She says she wants to dig her own well so she doesn’t have to depend on the government for water, and install solar panels so she doesn’t have to rely on the local electric utility.

Those changes are already in place at Besosa’s farm in Aibonito. Besosa installed solar panels and a rain catchment system after Maria. She says the farm had already diversified its crops, so in the days after Maria, they still had fresh food.

“We felt like the richest people in the world,” Besosa said. “To actually have greens on our plate was such a luxury.” And by sharing the foundations of sustainable farming, Besosa says she hopes she can help her community feel as rich as she did when the next hurricane comes. 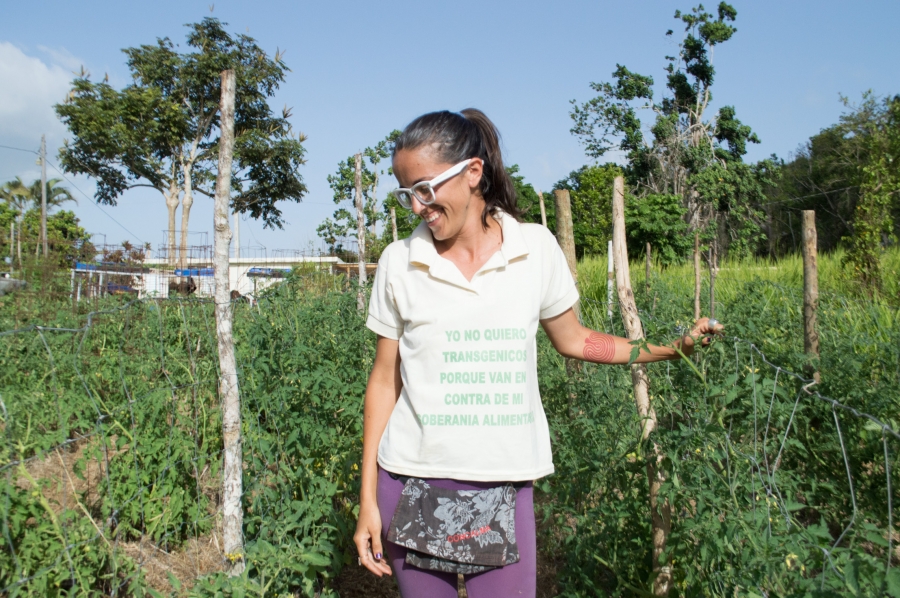 Farmer Daniella Rodríguez Besosa says Hurricane Maria "was also a call to action. Nobody else is going to help us, we need to help ourselves.”