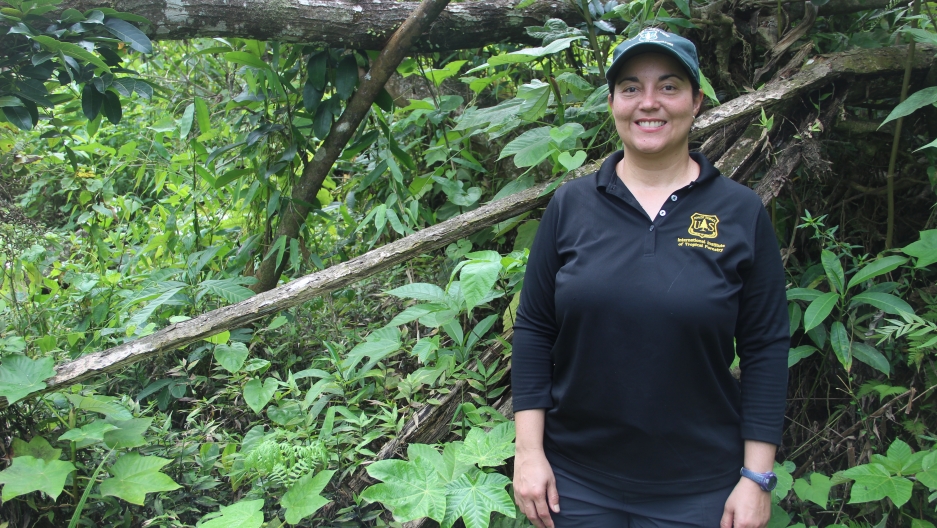 Grizelle González is a US Forest Service ecologist who oversees the long-term research project at El Yunque National forest in Puerto Rico.

Grizelle González has worked in El Yunque National Forest in eastern Puerto Rico for 26 years. The US Forest Service ecologist did research there as an undergraduate, then as a graduate student, and now heads the long-term research project in the 30,000-acre tropical forest.

So, when González visited El Yunque just a few days after Hurricane Maria hit in September of 2017, she was shocked.

“It’s like a bomb hit,” González said. “All you could see were like toothpicks, standing or on the ground. ... It was all brown, there were no leaves.”

Winds blowing 130 miles an hour blasted the steep mountain slopes of El Yunque, stripping the palm trees and giant ferns of their leaves. The lush green landscape turned brown and silent, with no birds chirping or leaves to rustle in the wind.

“It was scary,” González said. “You get very depressed. It’s like, oh, there’s so much death.”

Just a few days after the storm, the power and water at González’s home were still out and it was what she calls a dark period for many Puerto Ricans. But tiny buds and fragile green shoots were already starting to sprout in El Yunque.

“It’s almost like nature shows you the way of recovery,” González said. “If nature is recovering, you can recover, too.”

Hurricanes can be good for forests in some ways

Research that González’s team has done at El Yunque shows hurricanes can be good for a tropical forest in some ways. Leaves and branches that get knocked to the ground fertilize the soil and supercharge new plant growth.

Almost a year after Hurricane Maria, the green had returned to El Yunque and birds chirped over González’s head as she expertly navigated the rough terrain of the forest’s paths. But to her trained eye, the landscape looked totally different than it did before Hurricane Maria. 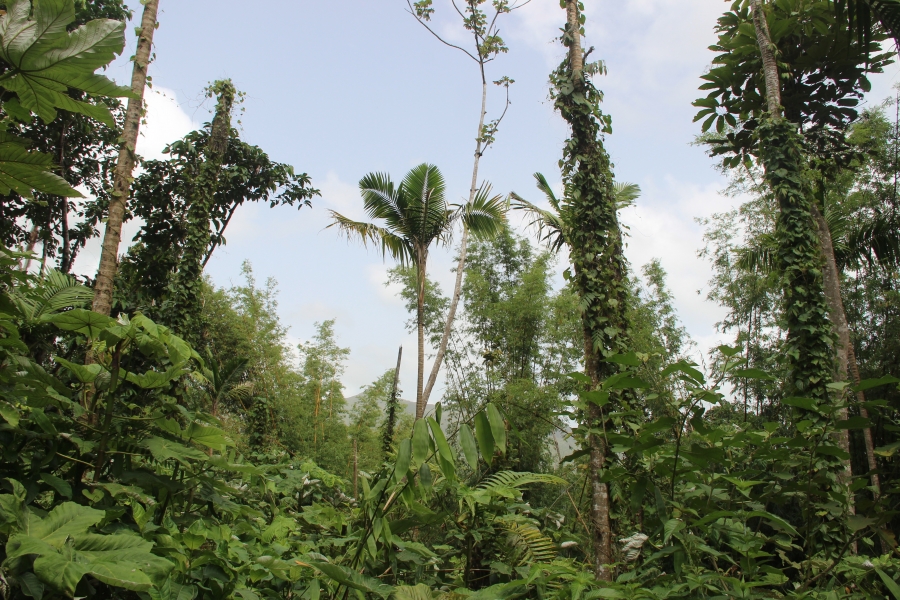 The canopy at El Yunque National forest is sparser than it used to be, but branches are slowly growing back.

She stops in a place where the overhead canopy is largely gone, and the tropical sun beats down on her and the surrounding plants.

“Before, if you can picture it, there was complete canopy cover here; it would be completely lush and feel very dark,” González said. “You could not see the sky at all.”

More than 1 in 10 trees in the forest died after Hurricane Maria. Many lost most of their branches. A few palms in the patch of forest where González stopped had just a few fronds right at the top, like a tree from a Dr. Suess book.

Today, ferns and grasses that are no longer overshadowed by taller trees crowd the understory in areas where the forest floor used to be clear.

“That’s how we see that some species, called the pioneer species, start growing,” González said. “What we see here is a natural process of regeneration.”

Climate change may interrupt the natural process of regeneration

But humans may be interrupting this natural process of regeneration. Climate change is expected to make big storms more intense, and it’s unclear how forests like El Yunque will react. 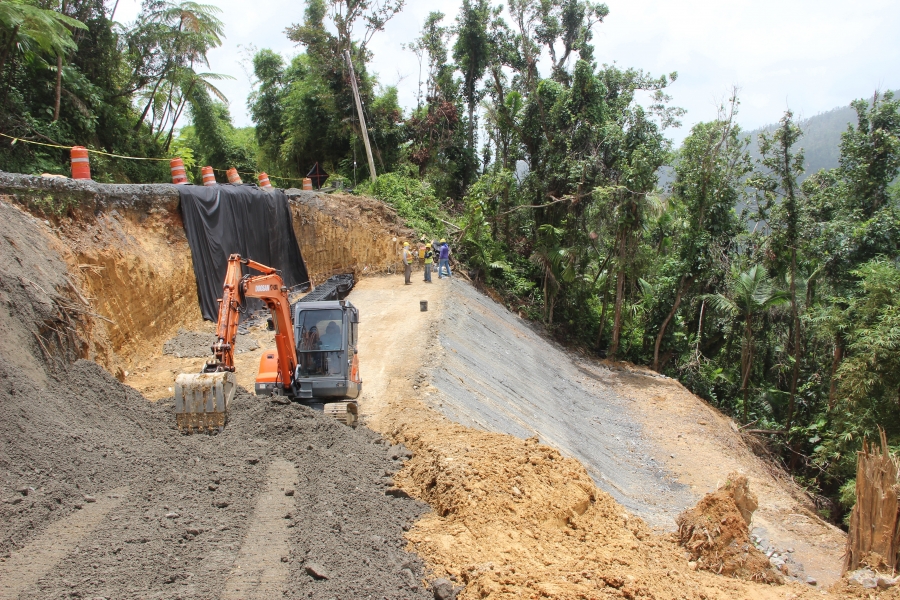 An earth-mover rebuilds a hillside in El Yunque National Forest that was washed out during Hurricane Maria. Roads that had been cut into the forest contributed to landslides during and after Hurricane Maria.

“If the forests get these hurricanes at a pace that is [every] 50 or 60 years, it’ll probably be enough time for them to recover,” González said, adding “but if the hurricanes keep coming at a shorter interval, like 10 years, then the forest might not have the time to recover.”

González said eventually, if climate change causes decreased rainfall and increased temperatures as projected in Puerto Rico, El Yunque could transform from a rainforest into a dry forest.

That’s a problem not just for the forest itself, but for the people who rely on the water that runs through El Yunque.

“It’s a huge source of water for much of the island,” said Jessica Chappell, a PhD candidate at the University of Georgia who’s studying the hydrology of El Yunque.

“Twenty percent of the population relies on water that comes from El Yunque,” she said. “What that actually means is that 20 percent of the water that’s used falls within the forest and then it goes into streams and it’s treated and taken to the people.” 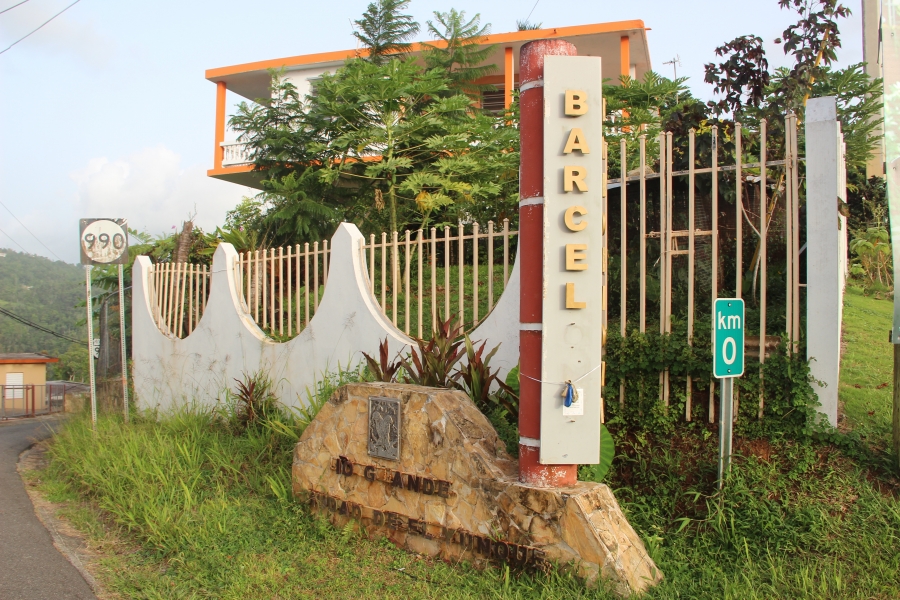 Barcelona is a small community near the entrance of El Yunque National Forest.

In the coming decades, if the water stops flowing through El Yunque altogether, surrounding communities will be in trouble.

But even today, deluges like those unleashed by Hurricane Maria are causing short-term problems. Heavy rains overwhelm the forest’s ability to naturally filter water through leaves, moss and soil.

There’s an example of how heavy rains are impacting water access in a small community just outside the main entrance of El Yunque.

The faucets in the village of Barcelona run with water piped directly from a small pool in the forest, and after Maria, broken pipes and a clogged reservoir completely blocked the flow of water for six days.

“We were all stuck,” said Liza Pérez Sanjarjo, head of Barcelona’s community board. “If the community didn't act together quickly, we weren't going to have water ... so the entire community got together.” 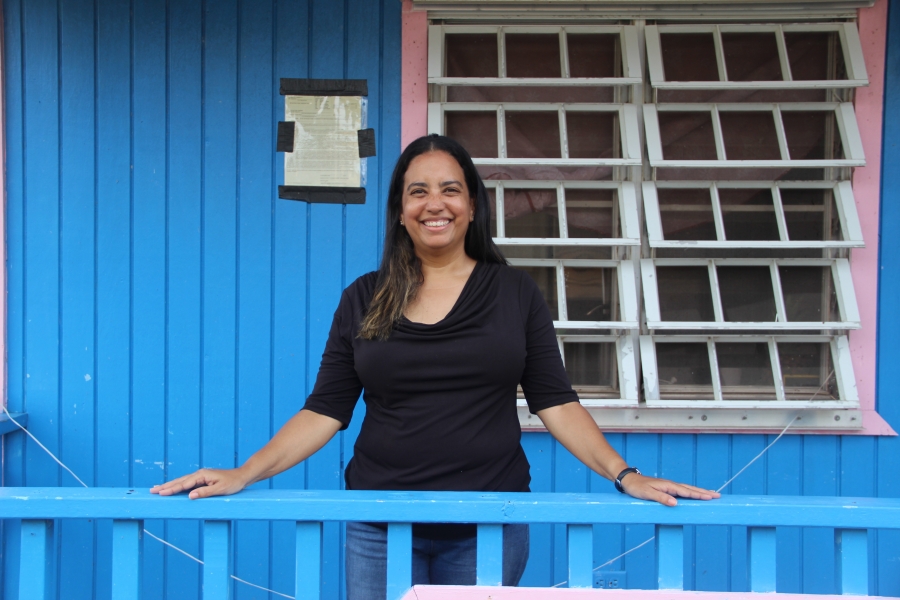 Liza Pérez Sanjarjo is shown on her porch in Barcelona, Puerto Rico, just outside the entrance of El Yunque National Forest.

They cleared the reservoir and repaired pipes, but even when the water started flowing again, it ran brown for a few days. It looked like chocolate, Pérez Sanjarjo said.

So after immediate repairs were completed following Hurricane Maria, Pérez Sanjarjo organized a water committee that has distributed water filters and has begun to think about ways to keep the community’s water supply clean after big downpours.

“I recognize that these issues aren’t going to get better because of climate change," Pérez Sanjarjo said. "I'm worried about the quality of life in my community. And I understand that if we ... don't take charge of our resources, nobody's going to come from outside to help us.”

Changes to Barcelona’s water system will help that community in the short term.

But how the forest might react to climate change in the long term is an open question, one that Grizelle González continues to study with her research team at El Yunque National Forest.

“As these events become stronger or more frequent, I think it’s important that we are in the forest describing the condition and how it’s recovering,” González said, “because we don’t know if another system is to hit before this forest has a chance to recover, what’s going to happen in the long term.”

El Yunque is one of the most studied tropical forests in the world. So what Gonzalez and her colleagues can gather from decades of records will provide a window into how tropical forests around the world will fare in the future.