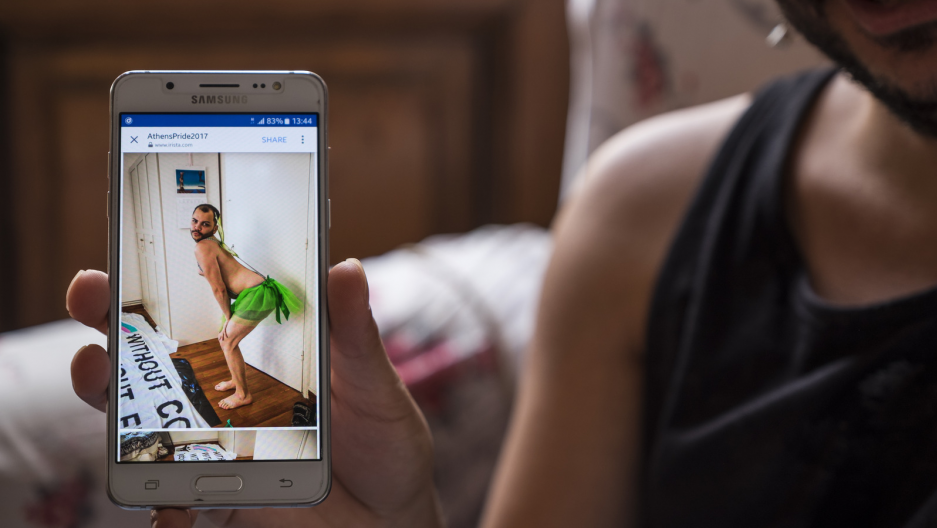 Lawrence Alatrash, 25, a gender-nonbinary gay Syrian refugee, shows a photo of himself on his mobile phone dressed up in a green tutu for last year's gay pride parade in downtown Athens, Greece.

On a hot, summer afternoon at Yiasemi, a tourist-packed cafe in Athens’s historical district, Lawrence Alatrash, a gay, Syrian refugee sits hunched over a cellphone, scrolling through photos on Grindr. Alatrash identifies as nonbinary (neither male nor female) and sometimes goes by the pronouns "they/them/their." (For this piece, Alatrash says he's OK being referred to as "he/his/him," as he says he is not totally defined by any particular pronouns.)

Check out our series about gender-neutral pronouns: From ‘Mx.’ to ‘hen’: When ‘masculine’ and ‘feminine’ words aren’t enough.

Grindr is a popular dating app for gay, bisexual and transgender men and has made the queer dating scene easier for millions of people in nearly 200 countries around the world. However, the app is partially or entirely banned in Iran, Saudi Arabia, Indonesia and Turkey, the last of which is a common transit point for refugees coming from the Middle East and North Africa on their way to Europe.

Alatrash fled his homeland in 2012, not only because of the developing Syrian civil war but also because of safety concerns due to his sexual orientation and gender identity. At 25 years old, he now has the freedom to openly express his queer self for the first time in his life.

According to UNHCR, more than 1 million refugees and migrants from countries in the Middle East and North Africa have entered Europe since the summer of 2015. The exact number of LGBTQ refugees is hard to specify because many are still afraid to reveal their sexual orientation for safety concerns.

When Alatrash first arrived in Greece, his mother, who was with him, knew nothing about his sexual orientation, and he continued to feel isolated and alone. Still afraid to open up to his own community, Alatrash started using Grindr to connect with the local gay scene.

Weeks after his arrival, Alatrash started dating a Greek man he met on the app. For a little less than a year, Alatrash and this man openly dated. And although the relationship has since ended, never before had Alatrash had the freedom to kiss another man or hold his hand in public. “Honestly, I was more excited about being able to hold another man’s hand in public than the individual himself,” Alatrash said.

In May 2017, Alatrash received asylum in Greece. He immediately started looking for full-time employment and a way to continue his studies, which had been cut short by the war. Less than a year later, he was awarded a full scholarship for gifted refugees to attend Deree, the American College of Greece.

In June 2018, just over one year since receiving asylum, he started working part-time as an interpreter for Refugee Legal Support in their downtown offices. Alatrash was finally receiving a salary. Slowly, he was rebuilding his life.

Still, life in the Greek capital was not easy. Although the UNHCR was providing housing for him and his mother, as well as a monthly cash card of 150 euros ($176.40), he still wasn’t able to make ends meet. The quickest and easiest solution to this problem was to start working as an escort again. At 16, Alatrash started selling sex in his home country and continued to do so during the year that he lived in Istanbul while trying to save up money for passage to Greece for himself and his mother.

For the first months in Greece, while he was living in a refugee camp, Alatrash stopped working as an escort, instead focusing on adjusting to a new reality. Once Alatrash was able to move out of the camp and into his own place, he had to find a way to cover his increased expenses. So, he resumed selling sex. However, instead of frequenting the common public places, Alatrash was back on Grindr — this time to meet potential clients.

“I went one time to Pedion tou Areos, but I felt unsafe there because it’s very dangerous at night,” explained Alatrash, referring a to park in central Athens where refugees and migrants commonly sell sex. He says he prefers to work less for more money on Grinder "because in the park, you also work more but for less money."

His target group is also different on Grindr than in the park. Older, wealthier men who wouldn’t be seen frequenting a public place looking for sex are often willing to pay more for discretion and sticking to the privacy of their own homes.

Almost from the beginning of the refugee crisis, hundreds of refugees and migrants were turning to prostitution that was later labeled as “survival sex.” Although the UNHCR doesn’t have an official definition, “the difference is that prostitution is a legal term that can be a crime or a regulated profession, while survival sex is a term derived by sociologists to describe a situation where a refugee or other person is pushed into something as a way to survive,” explained Leo Dobbs, UNHCR’s senior communications officer.

What used to be an exchange achieved by frequenting parks and public spaces where refugees gather has now transformed into a matter of a few swipes on a dating app, text messages or a quick phone call. And although survival sex is not new in the refugee community, the means through which it is achieved has evolved.

Although Alatrash has a very close relationship with his mother — his father died before he was born and she raised him alone — he has hidden from her his Grindr activity as well as his sexual orientation. “She knows that I’m feminine; she knows that I’m different; but I’m not sure she knows that I like boys,” he explained. Still, Alatrash says his mother is his biggest supporter.

Even though his mother has always been ahead of her time for Middle Eastern standards — having a son out of wedlock and raising him as a single mom — Alatrash is still hesitant to reveal too much to her. “She knows that I love her so much, and I know that she loves me so much. There’s no need to open the discussion.”

In July of this year, one day after his mother was relocated from Greece for Holland, Alatrash's life was turned upside down. While walking home from a dinner party with friends, he was brutally attacked on a crowded street in downtown Athens, an area well-known for its refugee and migrant presence. He was beaten and gang-raped by three refugees — fellow Syrian men he had never seen before.

Since then, he’s been afraid to leave his house. He can’t sleep at night due to nightmares, and his job performance is suffering. And although he is seeing a therapist and seeking legal help — he filed a police report and sought medical attention after the attack — he's finding it difficult to cope. 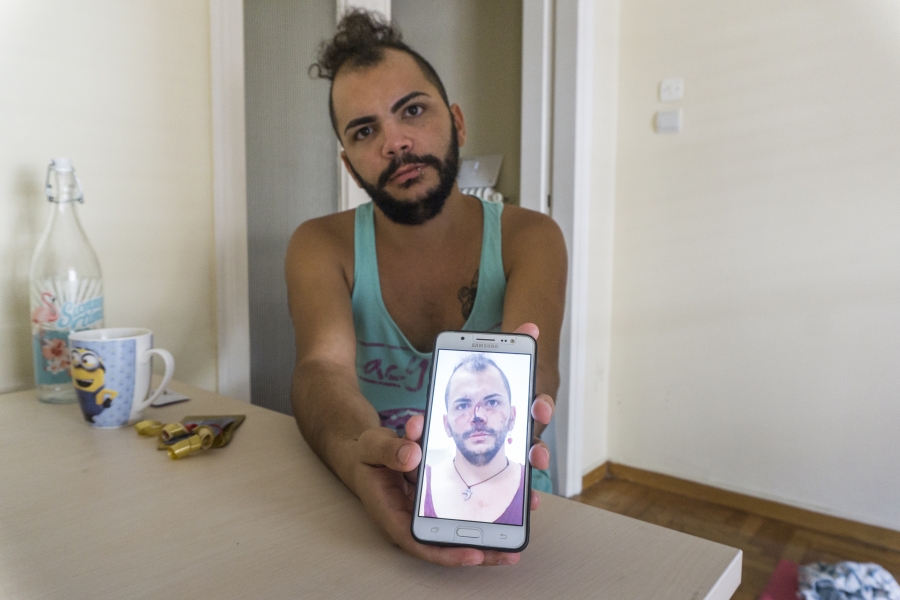 Lawrence Alatrash shows a photo of himself brutally beaten, which he took with his mobile phone after he was attacked and raped by three other Syrian refugees in downtown Athens, Greece. Photo taken on Sept. 10, 2018.

A few days after he was raped, an aggressive bus driver kicked Alatrash off of the bus for wearing what he described as an “inappropriate shirt showing his boobs.” This latest humiliation hit Alatrash hard. He went home and tried to kill himself by ingesting a handful of pills.

“I started thinking that maybe all these religions are correct, and that this is my punishment for being who I am. I haven’t thought like this since I was 16,” he said. After ingesting the pills, Alatrash sat on the floor of his apartment waiting for it to “all finally be over.” But 10 minutes later, he went to the bathroom, threw up and called a friend to come over to his house. “I love myself, and I really didn’t want to hurt myself, but I hate all of this that is surrounding me.”

Despite the fact that he loves Greece, has a stable job and a scholarship to a prestigious university in Athens and can rely on a close group of friends, the events of the past few weeks have led Alatrash to make one of the most difficult decisions in his life: to leave Athens for a new life in Berlin — something that one year ago he would never have considered doing.

“I no longer feel safe here with the people who raped me roaming free,” rapists from the same country he risked his life to flee only a few years ago.

Alatrash says he is not giving up, however. Moving to Germany is just an opportunity for him to start a new page in what has so far been a turbulent life. In Berlin, a more LGBTQ-friendly city — it even has a shelter for LGBTQ refugees — he plans on pursuing a career in theater and fine arts, his passions. He will also continue making shirts under the brand Gender Panic, which he and a group of queer friends created. He hopes to expand the brand in the future.

Greece, for Alatrash, seemed like the land of new beginnings. He came seeking safety and a better life. And although he was unable to find it entirely, he doesn’t regret his decision to leave Syria for Europe. “The best thing my country did for me was the war,” he explained. “I know this is selfish to say with all the killing, which I’m not supporting at all, but for me and a lot of LGBT people, without this war and revolution, we would be trapped our whole lives.”