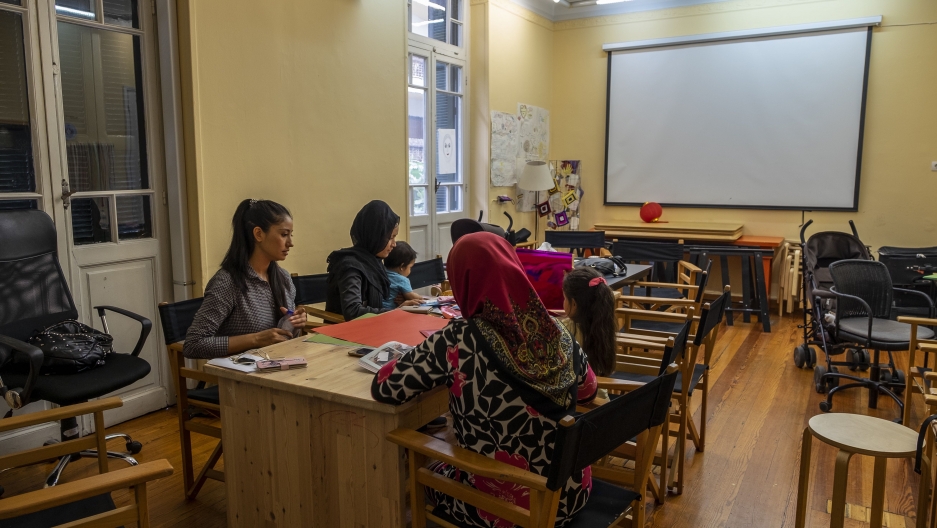 Soheila, an Afghan refugee who asked that only her first name be used for privacy reasons, stands in front of a small group of refugee women holding several forms of birth control in their hands. Behind her, projected onto a whiteboard, is an image of the female reproductive system. Soheila uses the diagram to demonstrate how each form of birth control works. For many of the women, it's the first time they've laid eyes on contraceptives.

After completing a required training course in March of this year, Soheila started teaching maternal health and reproductive rights three days a week to refugee and migrant women who fled their home countries for Europe. The classes are part of a larger program from The Unmentionables, an organization that provides much-needed access to sexual and reproductive health education to refugee and migrant communities from its facility in downtown Athens, Greece.

While many organizations for female refugees tend to focus on psychosocial and legal support, The Unmentionables also offers instruction on nitty-gritty topics, like hygiene, to empower women. Kaleigh Heard, the organization's co-founder and CEO, explained, “It’s a cyclical relationship, whereby, if they don’t have products, they can’t participate [in society] and then the impulse to not participate is culturally embedded because of those reasons.” 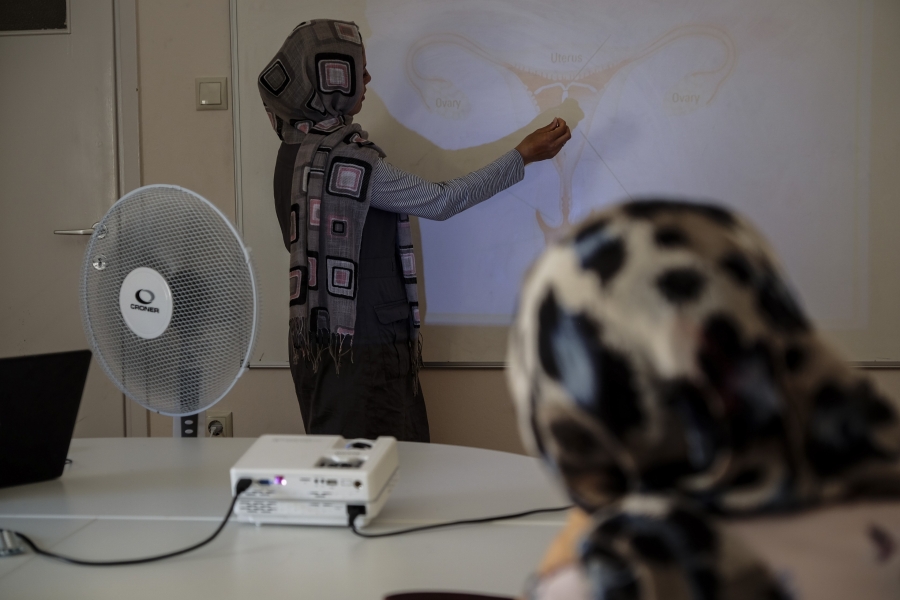 Soheila, 25, explains how the female reproductive system works during one of her maternal health and reproductive rights classes she gives three times a week at The Unmentionables center in downtown Athens, Greece, July 27, 2018.

When women are equipped with products and information that give them more physical freedom and ownership over their own bodies, they are more likely to participate, she says. “It’s a multiple-phase approach, whereby we prioritize feminine hygiene because it’s the most urgent aspect, but the sexual and reproductive health information is the long-term impact, which is quite sustainable and changes their perspectives and lives for many years.”

Furthermore, for refugee women who are victims of sexual and gender-based violence (SGBV), knowing how the female body works and having an understanding of basic human rights has proven to be a powerful combination for many now rebuilding their lives in Europe.

Like so many others, Soheila wasn't always so knowledgeable about her body and the female reproductive system. At 25 years old, she is already a mother of one girl and two boys — 10, 5 and 3 years old, respectively. As is common in Afghanistan, she was forced into marriage as a young girl, when she was only 14. In her opinion, this was the first of many acts of violence against her over the following decade.

“In my experience, I got married at a young age and it was really bad for me,” she said after her class one day in late July. Following her wedding ceremony, Soheila moved into her in-laws' house — a common practice in Afghan culture — where she was soon forced to do all the housework, cooking and child care. When she refused, she was beaten. “It makes me angry because I just wanted to be myself and do what I wanted, but they didn’t let me,” she said. “I thought, ‘This is violence against me.’”

After a long journey on foot through Iran to Turkey, and by boat from Turkey to Greece, Soheila and her family arrived on the island of Lesbos in March 2016, just days before the EU-Turkey deal to stem the flow of refugees from Turkey into Europe came into effect. 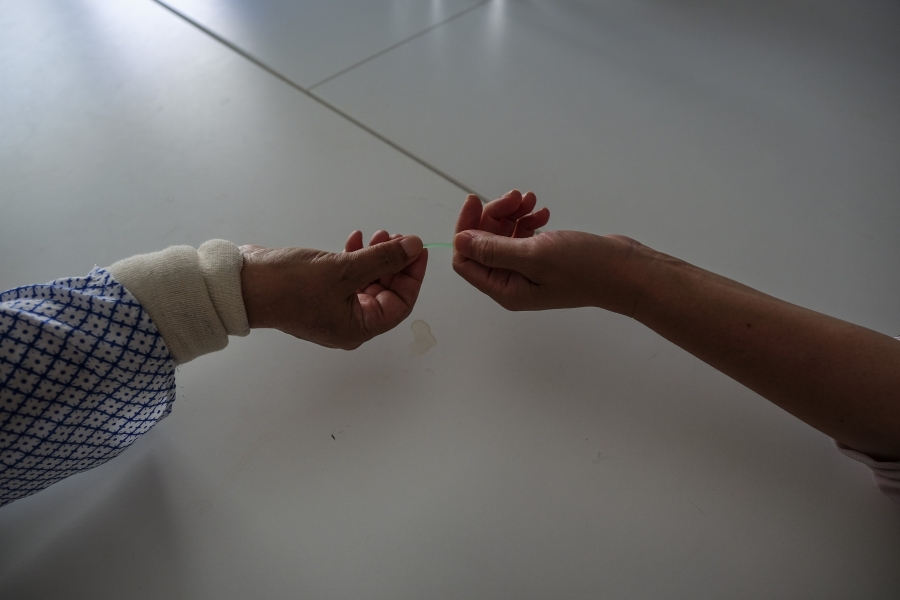 Two Afghan refugee women pass an IUD to each other during a class on maternal health and reproductive rights at The Unmentionables center in downtown Athens, Greece, July 27, 2018.

Since then, the beatings have stopped, Soheila says, not only because her family no longer lives with her in-laws but also because she now spends most of her days outside of the home, working or watching her kids. Most importantly, her husband knows “it is different here," she said — he understands that women have rights here and domestic violence is unacceptable. It helps that Soheila works at The Unmentionables and can go to them with any issues. (The Unmentionables also acts as an emergency shelter for a few nights if women need to leave their husbands in a hurry, and they have access to immigration lawyers, as well.)

Related: As the European migrant trail has gone underground, the threat of sexual violence has increased

Laughing into her hands, she says that instead of being angry that she doesn’t have the time or energy to cook every night like she did back home, her husband is satisfied if she manages one or two meals a week. When asked if she is happy in her marriage now, she enthusiastically shakes her head yes and smiles. It’s a good marriage, she says.

Since the summer of 2015, over 1 million refugees and migrants from the Middle East and North Africa have landed on Europe’s doorstep in search of safety and a better life. More than half of this number, 60 percent according to UNHCR data, are women and children, many of whom are considered vulnerable people by UNHCR standards. For women who have experienced SGBV, this vulnerability is even greater.

Though the numbers of refugee arrivals have been reduced to a trickle since the EU-Turkey deal, addressing the various needs of the nearly 60,000 refugees currently stranded in Greece, in particular the women and young girls, has not been easy. In the center of Athens and the surrounding outskirts, where upwards of 21,000 refugees now live, organizations like Melissa Network, The Unmentionables and Médecins Sans Frontières, among others, have been working tirelessly to provide physical and psychosocial support, educational courses and job opportunities.

What began as a small networking group for migrant women in Athens, Melissa Network — which takes its name from the Greek word for "honeybee" — has grown into an organization with over 100 members who visit the center daily. Melissa Network offers programs on language and art and drama therapy and skill-building on everything from product design to woodworking.

Furthermore, women who want to join Melissa Network are required to also attend a certain number of workshops and seminars per month alongside their classes. These sessions discuss everything from women’s rights to common legal issues regarding the asylum procedure in Europe. Most women arrive at the center by word-of-mouth, and there is a monthslong waiting list to join Melissa Network.

In addition to creating a place of refuge for migrant women and girls, Melissa Network has become a place where women can get the tools they need to start over and learn how to become contributing members of society once again. At Melissa Network, women are treated as an asset rather than a burden to the system, according to its co-founder, Nadina Christopoulo.

“I really believe in the potential of women because they are multipliers — whatever investment a country makes in migrant women, it’s going to come back multifold,” Christopoulo said.

Melissa Network also has programs and specialists for women who have experienced violence and abuse. The organization aims to empower women through education, job opportunities and continuous psychosocial support in addition to informing them of their rights. 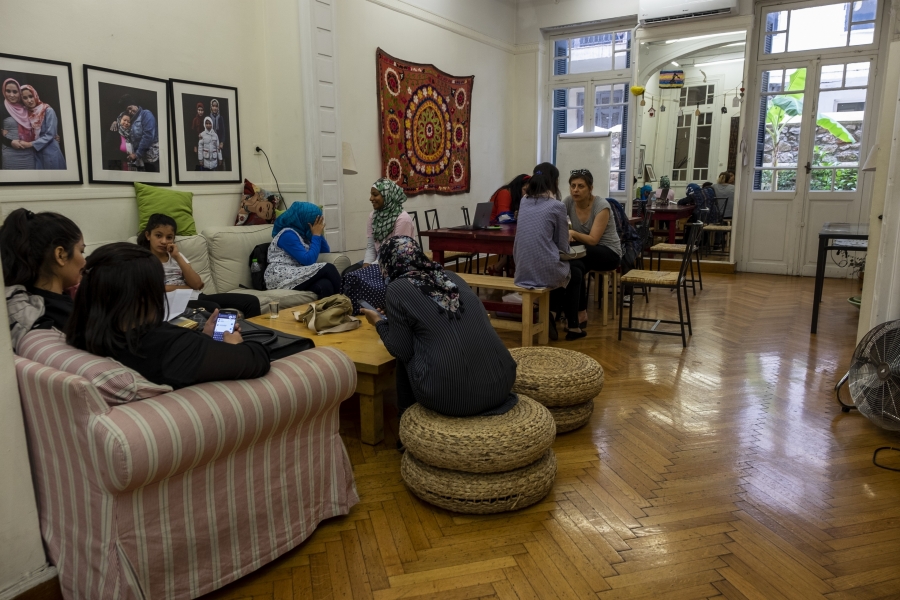 Women relax between classes in the common area at the Melissa Network center in downtown Athens, Greece, Aug. 1, 2018.

Alisa Cappelletti, an SGBV specialist who worked for the Melissa Network for several months last fall said, “When we deal with survivors of violence, in the [survivor-centered] approach, you let her decide what to do, because you give her back the power.”

A gap in the system

It’s hard to argue against programs that aim to inform refugee women in Europe of their basic human rights; however, these programs have shown a real potential of backfiring. “We are informing these girls about their rights, especially about SGBV, but nobody is informing the men and we cannot move on,” said Alice Fevre, a lawyer at Melissa Network. “There is a real gap here.”

This gap in programming can and has caused additional conflict and violence in the homes of many refugee women whose husbands have begun to feel their power slip away as their wives and daughters move forward with their lives.

Soheila is one of the lucky ones whose husband has accepted this change. There are many others whose husbands have not. As Dilara Demir, a sociologist at Melissa Network, explained, “you start to see that men feel stagnated and almost castrated while the women are going forward, because I think that women have some kind of survival mechanism and are ready to do anything to go forward.”

Unlike Soheila, Maryam, an Afghan refugee whose name has been changed for safety reasons, continues to struggle in her marriage. After participating in the workshops and seminars for many months at Melissa Network, Maryam began to understand that she no longer had to tolerate the abuse — that there was, in fact, a way out. So she began weighing her options.

A divorce would mean freedom from an unhappy and unhealthy marriage, but it would also mean that she would be the sole caretaker and provider for her children. “I had a lot of problems, but if I take this decision for myself, the decision will not be good for my children — their future will be bad,” she said. “For me, it will be good, but for them it will be very bad, and now I have to think about them. They are more important than me.”

Maryam is also fearful of her husband’s reaction to a divorce. She believes he might even try to take her children away from her if he learns that she is considering leaving him. Back home in Afghanistan, women cannot ask for a divorce. Furthermore, in a divorce, the children legally belong to the husband. Though this is not the standard in Europe, Maryam knows that this would not stop her husband from trying.

And though there are dozens of organizations in Greece that address issues faced by women and girls, the same level of attention isn't given to refugee men. Maryam’s husband, like thousands of other refugee men currently in Greece, has not worked a day since arriving in Greece. This has left him depressed and resentful. To make matters worse, while he languishes at home all day doing nothing, Maryam enrolls in Greek- and English-language classes and works a part-time job.

“Because when they come here they [the men] are not the breadwinners anymore and women find jobs much easier and quicker, this sometimes promotes violence at home as they feel like they are losing power,” said Demir, the sociologist at Melissa Network.

Adding to this sentiment, Cappelletti, the SGBV specialist, said that “if you don’t work with men, if you neglect men, you risk creating harm by empowering too much one person without having the counterbalance.”