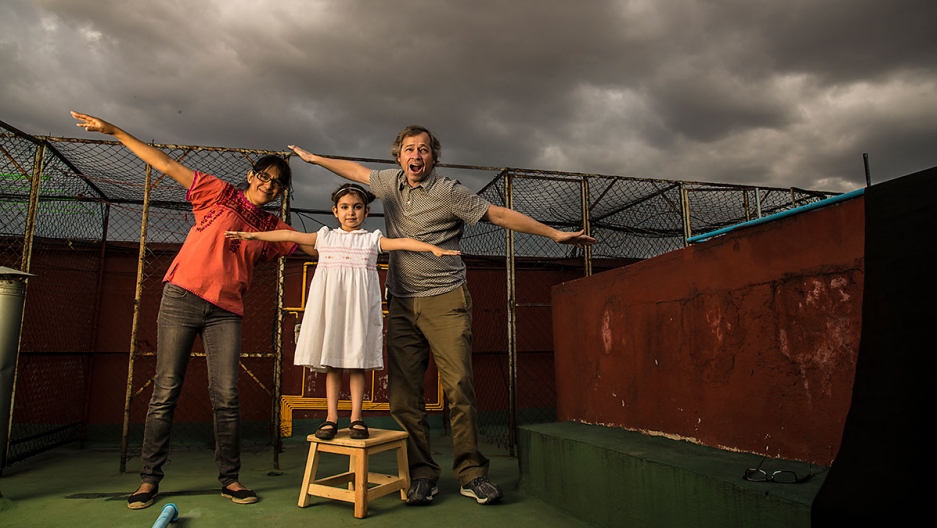 This family portrait was taken on the roof of their apartment building in July 2017, on Wesley Bocxe's birthday. Wesley took the photo by setting the timer on the camera. Wesley said he and his wife, Elizabeth Esguerra Rosas, were standing pretty much on the exact same spot when the building collapsed.

One year ago, on the afternoon of Sept. 19, Wesley Bocxe was at home with his wife, Elizabeth Esguerra, in their eighth-floor apartment in the trendy Mexico City neighborhood of Condesa. Elizabeth was in the kitchen preparing lunch. Wesley was in bed with a fever. Their young daughter, Amara, was at school.

Then the earthquake alarm sounded. About three seconds later, the shaking began, an up-and-down movement that caused tall buildings to sway. As they had done during previous earthquakes — including just two weeks earlier, when an 8.2 magnitude earthquake struck Chiapas, about 600 miles south from the capital — the couple ran to the roof.

“And every time the building would shake and then it would stop shaking and it’d be over, and we’d go on to our regular routine. Except this time, it didn’t,” Wesley recalled.

The apartment building collapsed beneath them, falling like giant domino pieces. Only the bottom floor remained intact; every other floor crushed into a mountain of rubble. Wesley and Elizabeth were found seriously injured on the street, buried under a large tree. 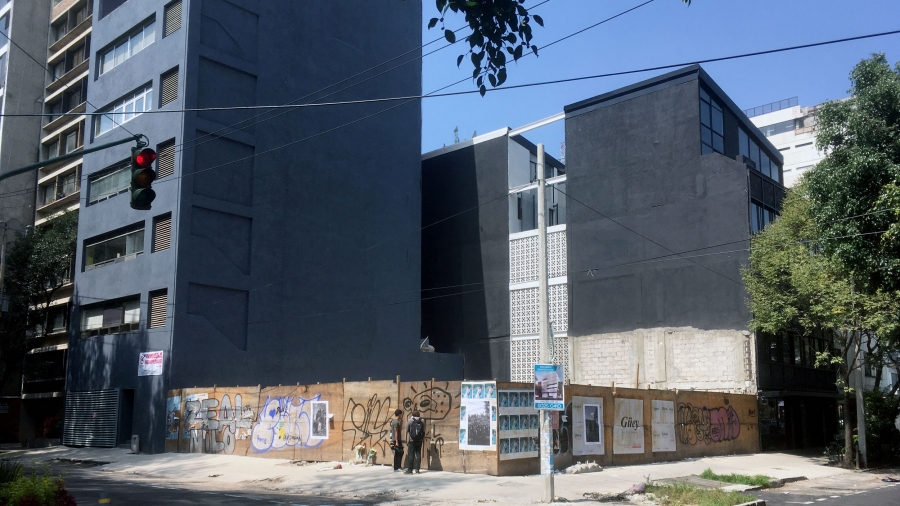 Plywood walls mark the space where Wesley Bocxe's apartment used to be.

A year ago, The World brought you Wesley’s story.

He is a former war photographer and acclaimed photojournalist from New York who had lived in Mexico City for nearly two decades. At the time of that story, Wesley was hospitalized with life-threatening injuries. He suffered 18 fractures and was infected with a superbug — a bacteria that is resistant to most antibiotics.

Related: A nervous Mexico City struggles to recover from the earthquake, while engineers canvass the city for damage

Wesley survived — he calls it a “miracle” — and is now rebuilding his life in the United States with Amara, now 6.

The World caught up with Wesley by phone at his new home in Colorado Springs, Colorado, south of Denver.

He said he remembers the earthquake acutely, up until the moment the building collapsed. He has been told that he was coherent and talking when he was found. But he has no memory of that. His first memory is a month later, when he woke up in the hospital.

Wesley and Elizabeth met at a photo exhibit in downtown Mexico City in 1998. Wesley says it was love at first sight. She was also a photographer and taught classes at a local public high school.

Related: ‘Symbolic rubble’ from crumbling adobe homes preserves the past and eases trauma after Mexico earthquake

Wesley missed Elizabeth’s funeral because he was still hospitalized. He has been told that she survived the building’s collapse, but died on the scene. It took hours for them to be transported to a hospital.

The day Wesley was released — nearly two months after the quake — he and Amara moved to Livermore, California, to live with his sister while he regained his health.

It took five months for him to walk again. These days, he says, he’s nearly physically recovered, although he has some double vision because of a plate the doctors inserted beneath his eye.

But he feels lucky. The private Mexican hospital that treated him, ABC Medical Center, didn’t charge him anything. Friends set up fundraisers to help him get back on his feet — he had lost all his possessions in the quake — including a GoFundMe campaign and a photo auction by fellow photographers in Mexico City.

“All these people donated money, and I don’t even know them,” he said. “There was a school in England. They donated money to me. I like to think they were remembering my wife. ... It’s left me speechless.”

Earlier this month, Wesley and Amara moved from California to Colorado Springs, to a two-story home in the suburbs. He runs a company that sells photography equipment from his home. He also takes long bike rides. 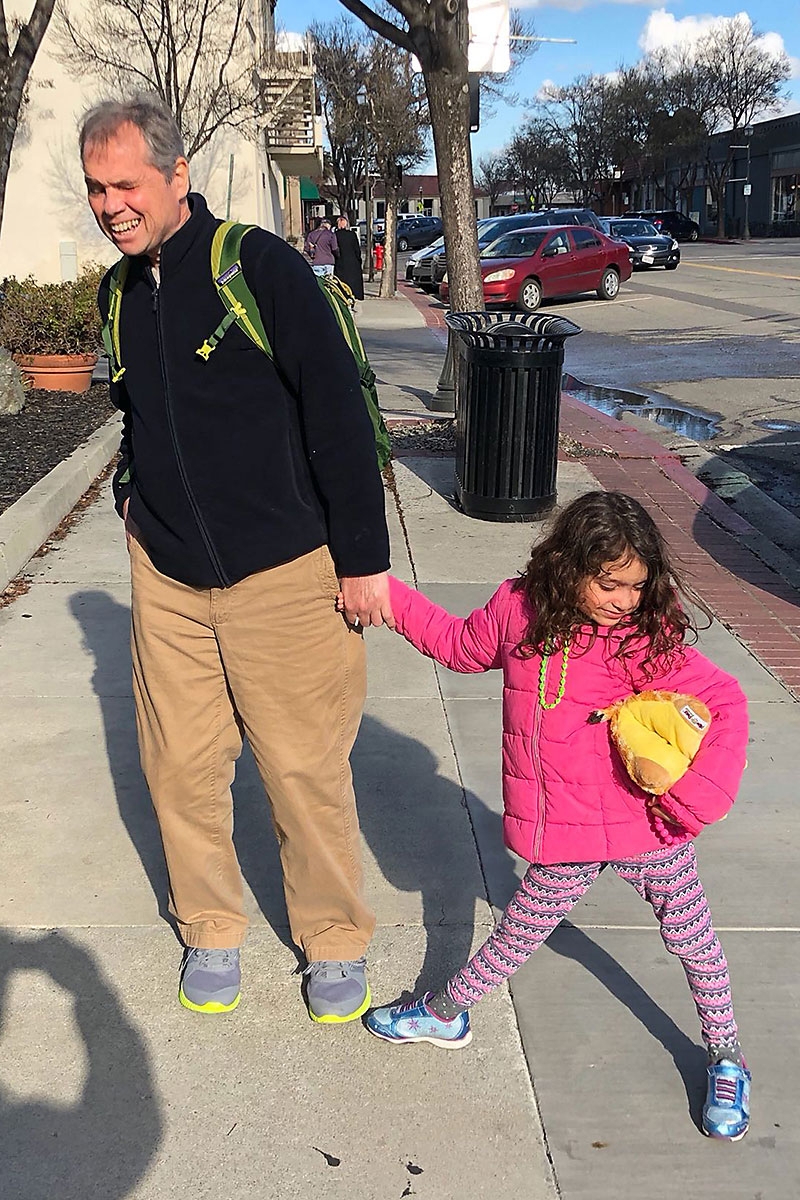 Wesley Bocxe and his daughter, Amara, pose for a photo in Livermore, California.

He doesn’t know many people in Colorado. He chose the state for its mountains and as an affordable, safe place for Amara. She goes to first grade two blocks from home. Wesley picks her up every day.

“Hola mi amor,” he calls out as Amara emerges from the school. She shows him a candy bracelet that she was given at school, and the two of them eat the candy together.

Before moving to the United States, Amara spoke just a bit of English, even though Wesley is from New York. Now, she’s becoming fluent. But they still switch over into Spanish, like when they lived in Mexico.

On this day, Amara tells Wesley he got to school early to pick her up.

In the last year, Amara has become a big chess fan and loves math — something Wesley says did not come from him.

Wesley has also spent the last year trying to find out why his apartment building collapsed.

Mexican journalists reported that the same engineer who approved Wesley’s building also signed off on two others that collapsed, killing dozens.

“I naively thought that we were the victims of an act of Mother Nature,” he said. “Really, the reason my building and a lot of other buildings collapsed is because of just simple corruption between architects and construction companies and the government officials who enforce the building codes.”

Seismic experts say its difficult to know the exact reasons behind a building’s collapse. Older buildings like Wesley’s were not required to be up to the same seismic safety standards as newer buildings — but that corruption likely contributed to the collapse of several buildings.

Wesley is planning to sue over the building’s collapse — though he’s still not sure who to sue — the landlord, the architect, the Mexico City government?

“I hope to achieve a little bit of justice for my wife,” he said. “If I can be a thorn in the side of people who are responsible for this, it will make me happy.” 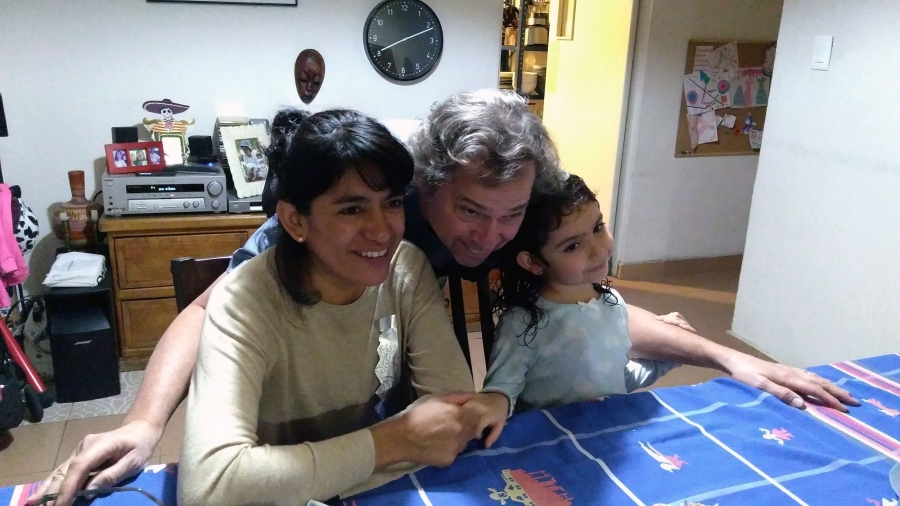 The family poses for a photo on Sept. 10, 2017, the day before Elizabeth Esguerra Rosas's birthday, in their apartment in Mexico City.

This year, Wesley and Amara went out for dinner alone, in their new hometown. They also got a cake, lit candles and sang, “Las Mañanitas,” the Mexican birthday song, in Elizabeth’s honor.