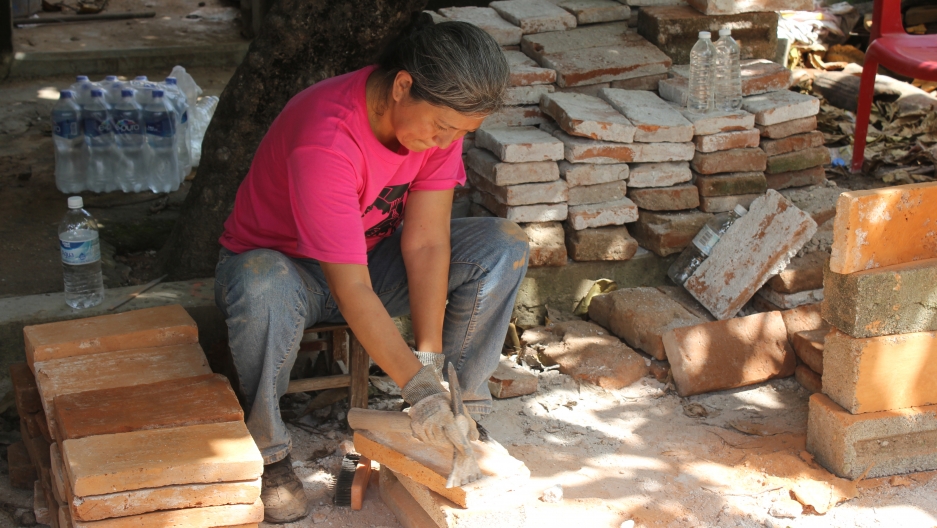 A woman scrapes mortar off of a salvaged brick with a flat end of a chisel so the brick can be reused.

Children in Juchitán sing the national anthem and onlookers cry before bulldozers rake at what was once the largest school in the Isthmus of Tehuantepec in Oaxaca, Mexico's narrowest point.

The area suffered the brunt of the damage from the 8.2 magnitude earthquake on Sept.7, the most powerful seismic event registered in Mexico in a century. A powerful 6.1 magnitude aftershock that hit the same region weeks later dealt a death blow to other buildings that had remained standing.

The earthquakes damaged thousands of homes — many of them more than 100 years old — built in a distinct regional style with adobe, hardwood beams and clay roofing tiles.

Related: Mexico's deadly earthquake was its strongest in 100 years

Architect Claudina de Gyves says the transformation of the landscape in her home region has been "a shock, for starters because it’s like seeing part of one’s identity disappear."

Government-contracted demolition crews have been busily bulldozing homes by the hundreds, including structures that were initially assessed as only partially damaged. 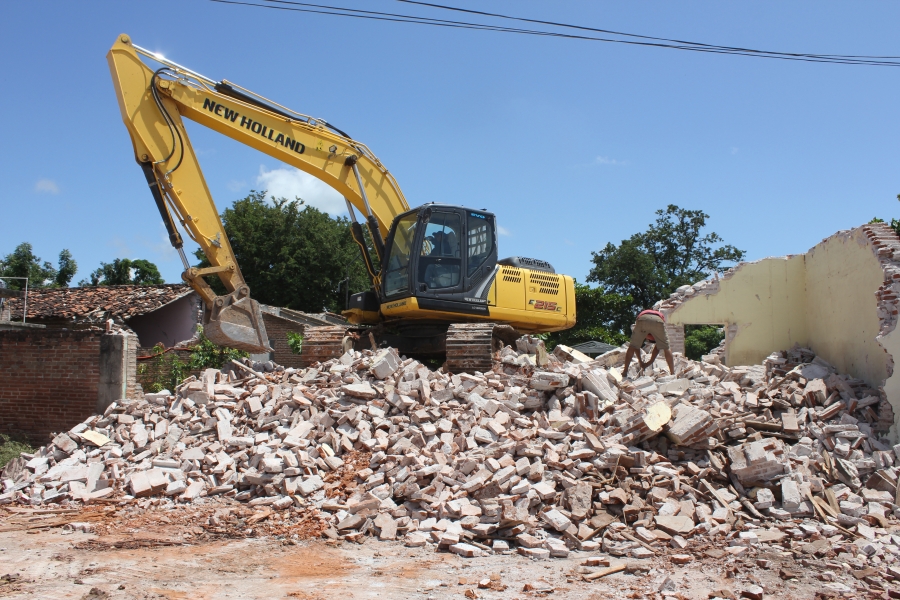 Demolition crews have been knocking down homes by the hundreds across Oaxaca's Isthmus of Tehuantepec. Many homeowners say they feel rushed into the teardowns.

"What they do is they pressure people by saying, ‘We have this week to clear this block and if we don’t demolish your house this week, we aren’t coming back.’ So they rush people into demolishing their homes and they don’t give time to recover … any other materials that can be reused."

Construction firms are making money on both ends of the reconstruction deal, first by demolishing homes, then by selling materials to rebuild them. Homeowners unable to salvage materials from a rushed demolition are potential big customers. "The more homes they demolish, the more money they make,” remarks López.

Related: In Oaxaca, thousands of aftershocks mean no one's getting much sleep

For Chilean architect Patricio Mora, executive director of Proyecta Memoria, it's a scenario he witnessed after an 8.8 magnitude earthquake struck his country seven years ago.

“In 2010, a heritage disaster occurred in Chile in which people unfortunately lost trust in their adobe homes and began demolishing them," says Mora. The demolitions led to the formation of the organization he now leads and whose mission is "to say this material shouldn’t be considered garbage but rather as an element of identity that it could be recycled in public spaces and in homes.”

Mora came to Oaxaca at the invitation of Casa de la Ciudad, an urban planning nonprofit where de Gyves works. After visiting the hardest-hit region, he had these recommendations: “Don’t rush to demolish a building on a tight deadline without, for example, authorities understanding that adobe can be restored. That’s fundamental." 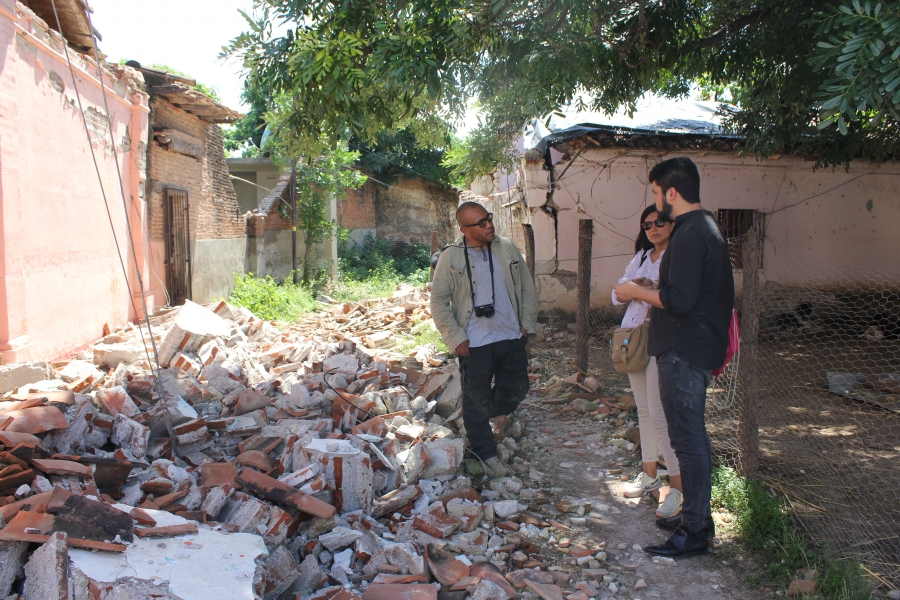 He noted that after the 2010 earthquake in Chile, firefighters and police (not architects and engineers) advised many adobe homeowners to demolish, sometimes for something as simple as mistaking a superficial crack in the stucco for more serious structural damage.

The architect also recommends that buildings be dismantled in a controlled way in order to “take advantage of this material — this symbolic rubble — for reuse later on.”

"Symbolic rubble" can be debris from a landmark or a significant building. It’s this rubble, infused with a deeper meaning, that has the greatest potential for memorials or other uses in public spaces like fountains and park benches. He adds that reusing symbolic rubble in public spaces also serves an educational purpose by making younger generations aware of seismic zone realities.

Common rubble can be used for textured paving or even be ground down for recycling into building materials. Then there’s rubble that may hold meaning on a more personal level.

Some families and local groups have been carrying out controlled demolitions, salvaging whole bricks, wooden beams and clay roofing tiles from damaged homes. Mariano López has been doing this time-consuming and labor-intensive work on his own home and with the local grassroots organization, the Juchitán People's Assembly.

“In our case, we’ve been able to recover approximately 85 to 88 percent of the bricks," says López. "We’ve also salvaged about 97 percent of the clay roofing tiles. And of course, there are the wooden support beams. We’ve recovered about 95 to 97 percent of those. Some of them broke in the earthquake, but even those have now been turned into fence posts." 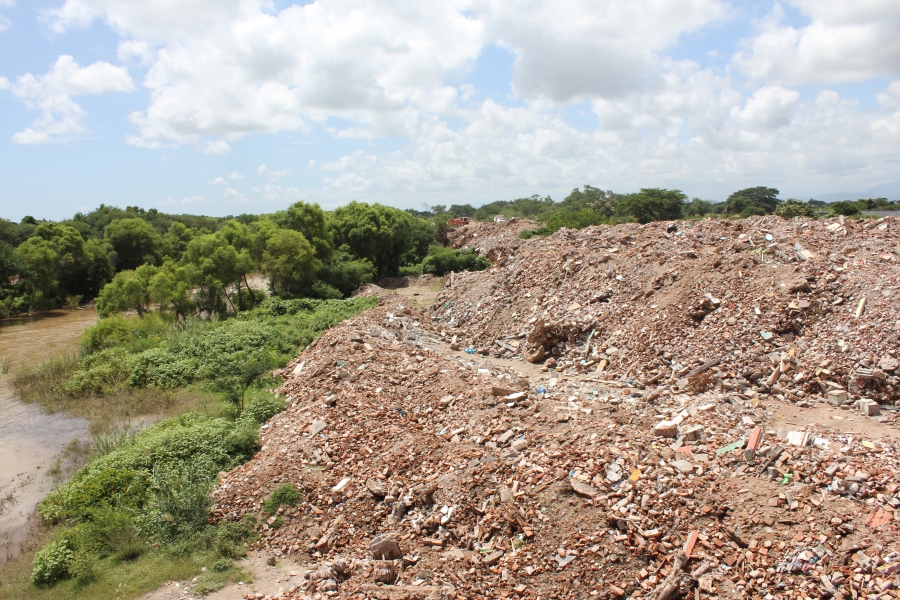 Demolition crews have been dumping thousands of tons of unsorted rubble along the banks of the Los Perros River in Ixtaltepec. Experts and residents alike warn this will lead to serious environmental problems in the future.

Salvaging materials for reuse not only saves money but can speed emotional healing after a disaster. The process of transforming, rather than destroying, a house provides a sense of continuity that can ease trauma symptoms.

The widespread use of adobe in older homes in Oaxaca’s Isthmus of Tehuantepec improves their prospects for restoration."If a piece is destroyed, the damaged part can be removed and mixed with water and restored. It's a really interesting quality that adobe has: That it's flexible and, when combined with wooden framework, is earthquake resistant."

But there’s a gap when it comes to formal training and use of traditional materials. Architecture schools — even in places like Oaxaca, when earthen construction is common — tend to teach students more about building with concrete and steel than with adobe and clay. Despite its resilience and unique qualities, adobe carries a certain stigma in Mexico as a building material for the poor.

A big question now is just what the region will look like once rebuilding begins. The federal government has activated an emergency response fund and started to distribute electronic gift cards to those who have accepted home demolition. The cards can be used to purchase around $6,300 worth of building materials — but only at large, qualifying hardware stores.

Unlike in Chile, small-scale operations, like self-employed adobe brick makers have been left out of the government-subsidized rebuilding loop. So, it seems like the region’s urban landscape is headed towards a showdown between factory-made supplies and natural building material — and ultimately, a fight for its collective identity.