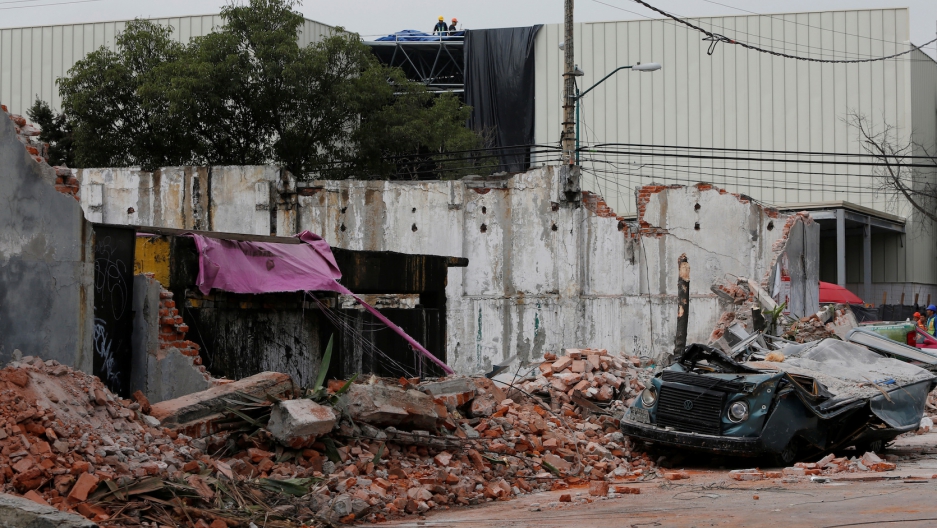 A damaged wall and a smashed vehicle are pictured after an earthquake in Mexico City on Sept. 8, 2017.

In Mexico City, Avidan Lebenthal said his apartment building was “banging” on the building next door. He grabbed his passport and ran outside. Anne Sørensen said she got out of bed when she felt the trembles, only to fall over because the floor was shaking so hard.

Tania Miranda, also in the capital city, said it was an “apocalyptic experience.” That’s because in addition to the strong shaking, she saw green lights in the sky following the tremors. Other people also reported seeing the lights. Explanations for what caused them vary from electromagnetic charges to something involving power plants and electrical cables.

And Lee Burnette, in Huatulco, Oaxaca — one of the areas that experienced the brunt of the damage — said he was walking home when the earthquake hit. For more than a minute, he said a nearby hotel and radio tower swayed, glass shattered and road signs shook. He arrived home to find his mirrors, vases and glasses had fallen and broken. The toilets were cracked and off their bases. Every couple of hours since the earthquake, he has felt strong aftershocks.

Just when the country was bracing for Hurricane Katia, and as other megastorms were charging across the Caribbean, Mexico was struck by one of its most powerful earthquakes on record.

The Mexican government said the earthquake, which it registered at magnitude of 8.2, was the strongest in the country in a century. National news outlets reported the death toll rising above 60 by Friday afternoon, including one fatality in Guatemala, and 200 were injured.

The US Geological Survey put the earthquake at 8.1.

The hardest-hit spots in Mexico were in the country’s southern area, near the Guatemalan border. Officials in the states of Oaxaca, Chiapas and Tabasco have all reported widespread damage.

As many as 45 people were reported dead in Oaxaca, many of them in the Pacific coast town of Juchitán. Part of the town's City Hall collapsed, while some houses were reduced to rubble.

In Tabasco, at least two children were among the fatal victims, including one who died in a hospital when his ventilator shut off because the building lost power. At least three deaths were also reported in the town of San Cristóbal de las Casas, Chiapas.

Various government agencies have issued advisories seeking help for the three states. Among the needs are bottled water, food, toilet paper, soap and disposable utensils. Eleven states across the country closed schools to prepare for aftershocks and also help people get on their feet. There were almost 400 aftershocks, by Friday afternoon, according to El Universal newspaper.

Mexico City appeared to fare amazingly well, especially compared to the 8.1 magnitude earthquake here in 1985, which caused massive devastation and thousands of deaths. Throughout much of the city, life appeared to continue unabated in the morning, with little evidence of the quake the night beore.

But the experience left emotional scars.

Alicia Vera had just fallen asleep when she heard Mexico City’s seismic alarm go off. But she doubted whether an quake was really on the way because a false alarm had gone off earlier in the week.

When she saw her curtains swaying, she grabbed her shoes and her dog, and ran out into the middle of the street.

It was a scary experience, she said, made worse by the fact that she is from Miami, which is bracing for massive damage from Hurricane Irma.

Lee Burnette shot the following video during the earthquake in Huatulco, Oaxaca, Mexico.