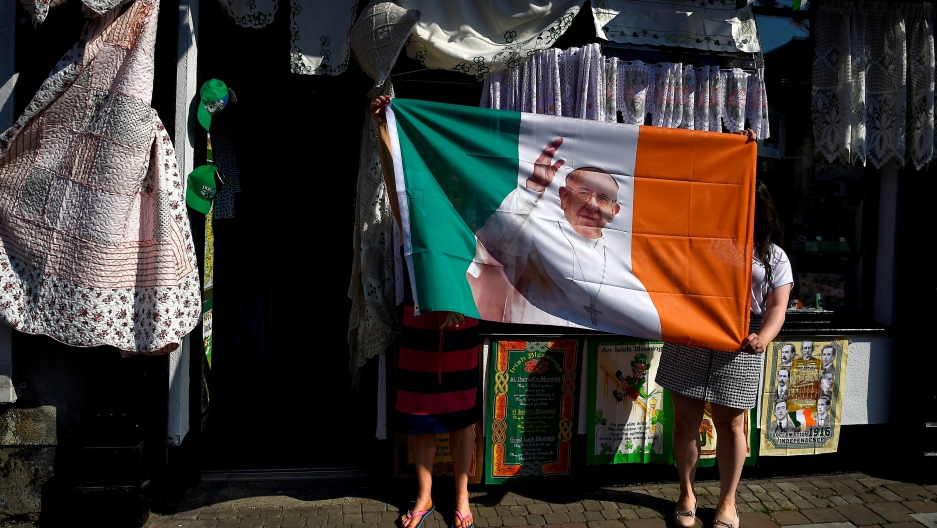 Pope Francis will not be the first leader of the global Catholic Church to visit Ireland.

In 1979, Pope John Paul II paid a short visit and an estimated 2.7 million people made their way to see him. That’s about half the population of the country.

Father Paul Farren from St. Eugene’s in Derry was only 7 years old at the time, but he remembers very well going to Dublin to be part of the mass celebrated by the pope in Phoenix Park.

“The first very powerful image for me was when the pope’s plane flew over,” Farren says. “And there was just this excitement and enthusiasm at that point. You had about a million people waving to the sky.”

Related: Ireland is asking what role the Catholic Church should play in public education

The enthusiasm is noticeable ahead of this week’s papal visit too, says Michael Kelly, editor of the Irish Catholic newspaper in Dublin.

“Lots of overseas visitors have started arriving,” Kelly says. “I was on the tram this morning, and I spoke to pilgrims from Indonesia, from Canada, from France. It’s really helped the excitement to build, because I think sometimes Irish people can be a little pessimistic.” 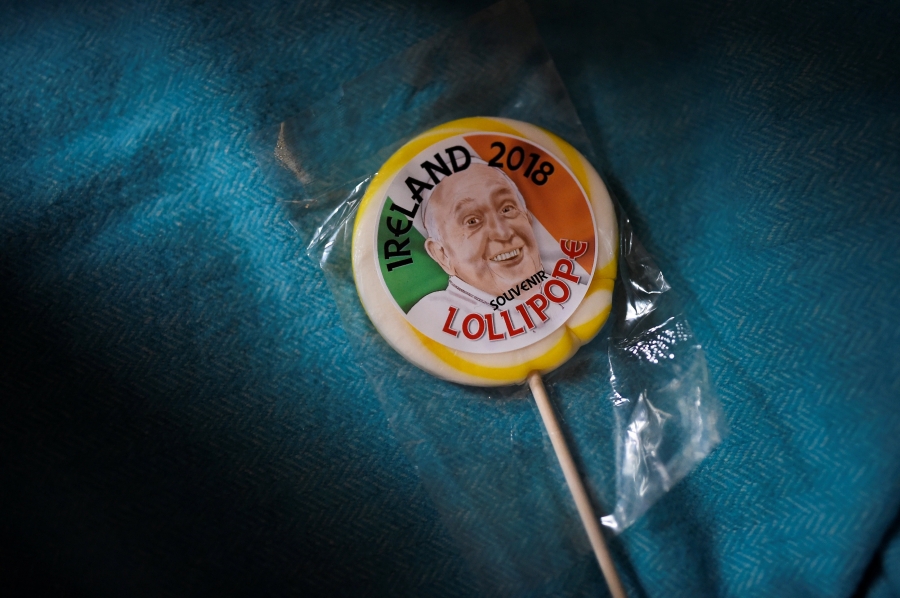 But this pope will be visiting a very different Ireland.

Nowadays contraception is readily available, divorce is legal, so is same-sex marriage. And just this year, Irish voters overwhelmingly decided to repeal the constitutional ban on abortion. These are all signs that the country has moved away from its traditional Catholic teachings.

Last week, news from Pennsylvania detailed the sexual abuse of hundreds of children by Catholic priests over many years. But this is a story Irish Catholics have been publicly reckoning with for at least a decade. And it’s not over.

Still, there is genuine excitement about Pope Francis coming to Ireland, says Farren.

Parishioners from St. Eugene’s in Derry will be among those making the journey to Dublin this Sunday on a special chartered train. In fact, it will be the first direct service from Derry — in Northern Ireland — to Dublin in about 50 years.

Related: This Irish podcaster dives into the abortion debate

In midst of all the news about the sex abuse scandal, Farren says the high demand for those train tickets is a sign of solid faith among Irish Catholics. 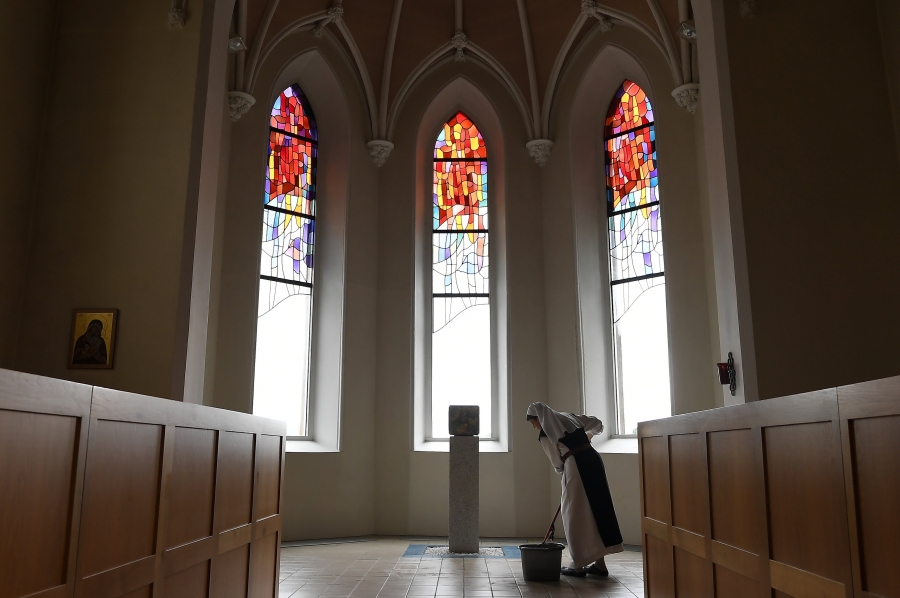 Sister Angela Finegan mops the church floor at St. Mary's Abbey, a Cistercian monastery that is an enclosed contemplative order of nuns in Glencairn, Ireland, Aug. 18, 2018

“Pope Francis definitely has the charisma to make a profound impact in the short time that he will be in the country,” Farren says.

But will the visit become a spark to renew people’s trust in the Catholic Church?

“I’m not sure about that, because I think the renewal of the Church takes deep roots. It requires deep roots, if it’s going to last,” he says.

Related: Two priests from opposite sides of Northern Ireland's sectarian divide have something to say about forgiveness

Many Irish Catholics want to hear more from Pope Francis during his visit to Ireland about the issue of child sexual abuse.

“This is the most critical moment of his pontificate,” Sister Anne Lyons wrote in a letter to the Irish Times after seeing news stories about the Pennsylvania grand jury report.

Originally from County Tipperary in Ireland, Lyons is currently vice principal at a Jesuit-run elementary school in Cambodia. She spoke to The World over Skype.

“We need a radical cardiac surgery, this church. It’s a surgery of the heart,” Lyons said. “Jesus was pretty clear. He wasn’t for protecting the institution. But by gone, he was certainly about protecting the little ones. That’s unequivocal.”

Using the words of the pope himself, Lyons said she hopes Francis will be an “'Apostle of the ear,’ who is hearing the repeated, ongoing cry of those who were not heard, and also hearing the repeated culture of abuse, of power, of arrogance, of conceit, of the cover-up that has gone on in the Church that I love.” 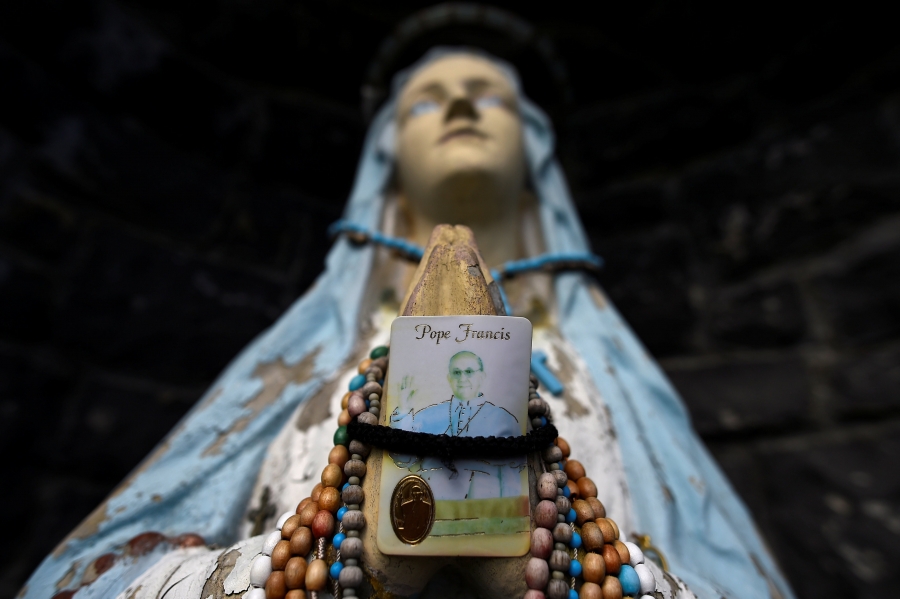 A religious grotto featuring a statue of the Virgin Mary holding a Pope Francis prayer card and several sets of rosary beads stands on the roadside near the county Mayo town of Claremorris, Ireland, July 23, 2018

“The Church has been flapping around on one wing for a long time,” Lyons said. “It’s soul has been whithering. If it doesn’t act now, the moment may be lost.”

Lyons said that the pope has talked about having “zero tolerance” for child sexual abuse, but that he needs to make a plan of action and then implement it. In her mind, this would include inviting women and lay people into a process to reach accountability, not only relying on members of the Catholic clergy.

Francis plans to meet with victims of sexual abuse at some point this weekend. But Michael Kelly says he is not expecting the pope to comprehensively address these issues while he’s in Ireland for such a short time — the visit will last less than 48 hours.

Kelly says the pope is going have to deal with this, however, and soon.

“It’s just no longer tenable for the Church to act in a silo as if the only responsibility of your average Catholic in the pew is pray, pay and obey,” Kelly says. “I think the pope really needs to articulate the urgent need for a culture of accountability.”

The sexual abuse scandal continues to shake the confidence of many practicing Catholics, Kelly adds. And that’s just something Pope Francis cannot ignore.